Since spouses were invited to come, Mark managed to convince me to accompany him. This was all planned weeks ago, and if you know me, I get super stressed about travel in general, but when I have to leave the kids? I REALLY struggle! Thankfully, Mark’s mom agreed to watch the children while we were away. But even though I trust her, I have never left all our kids like that before, and going to another state really started to worry me. 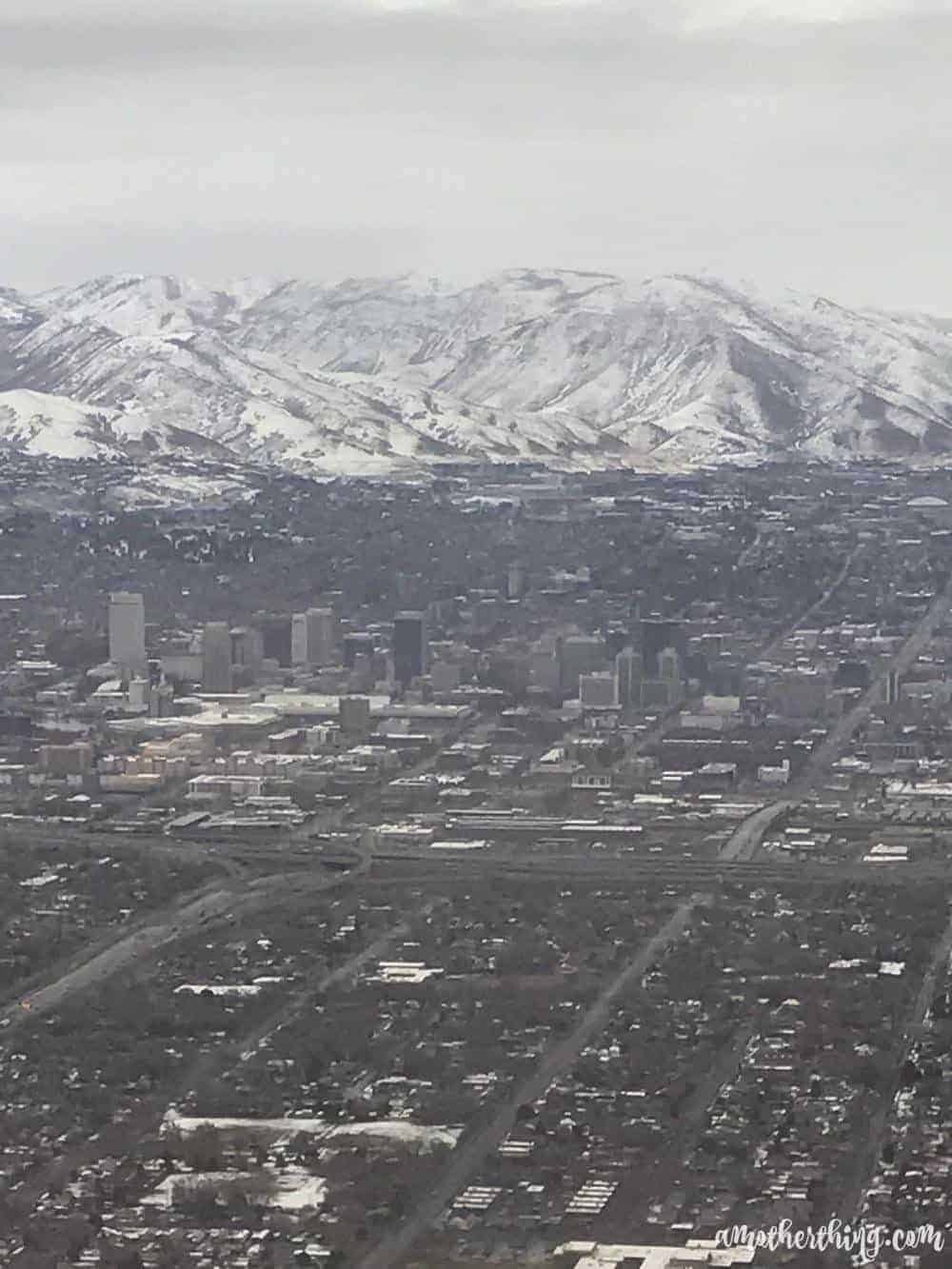 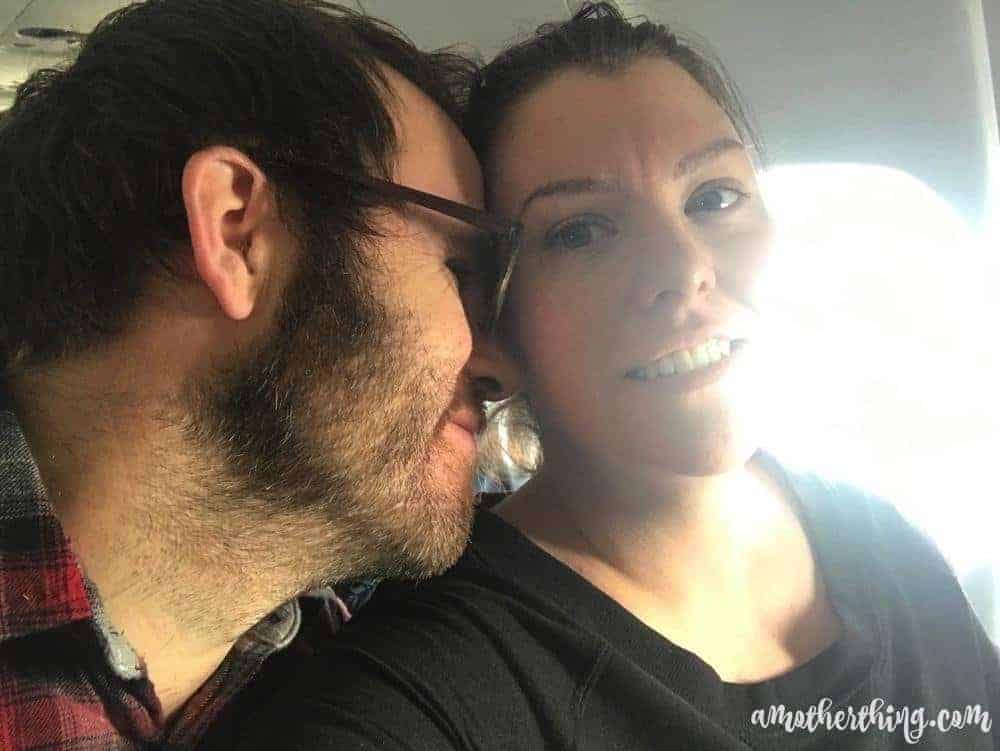 Flying Out (No makeup, ponytail and comfy sweats!) 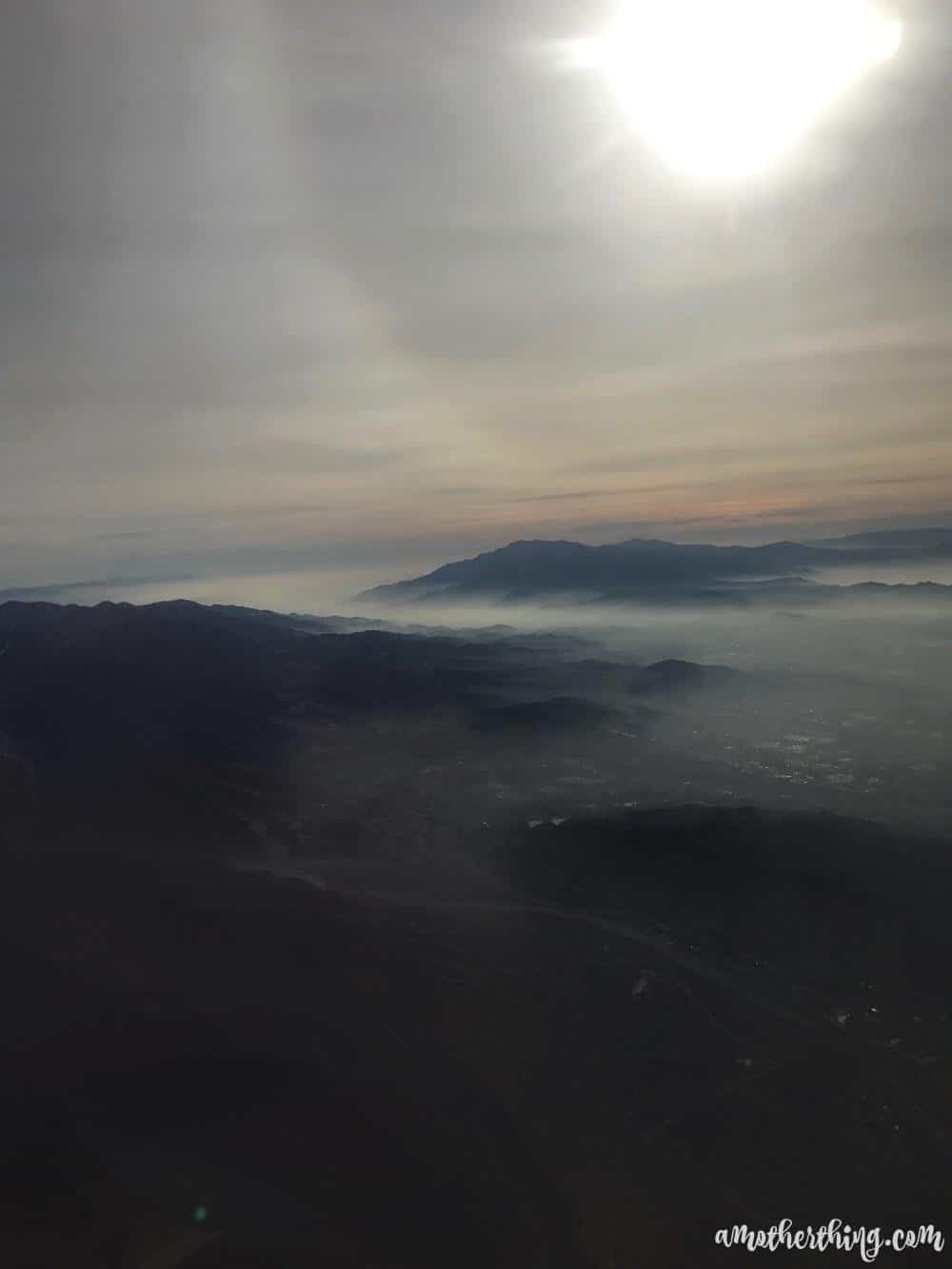 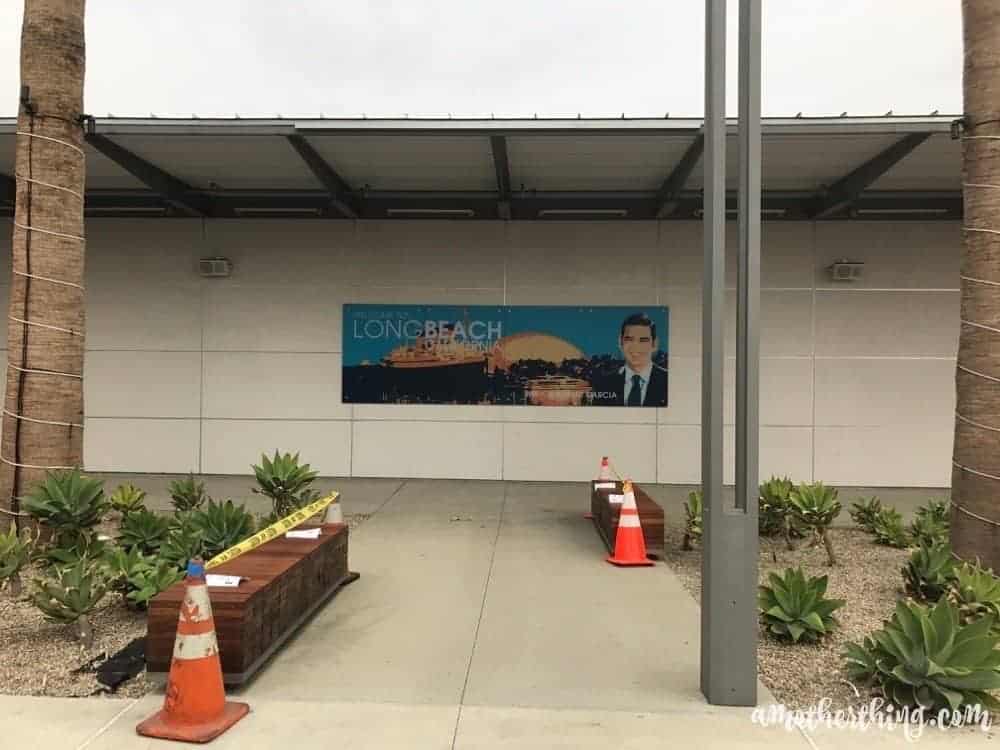 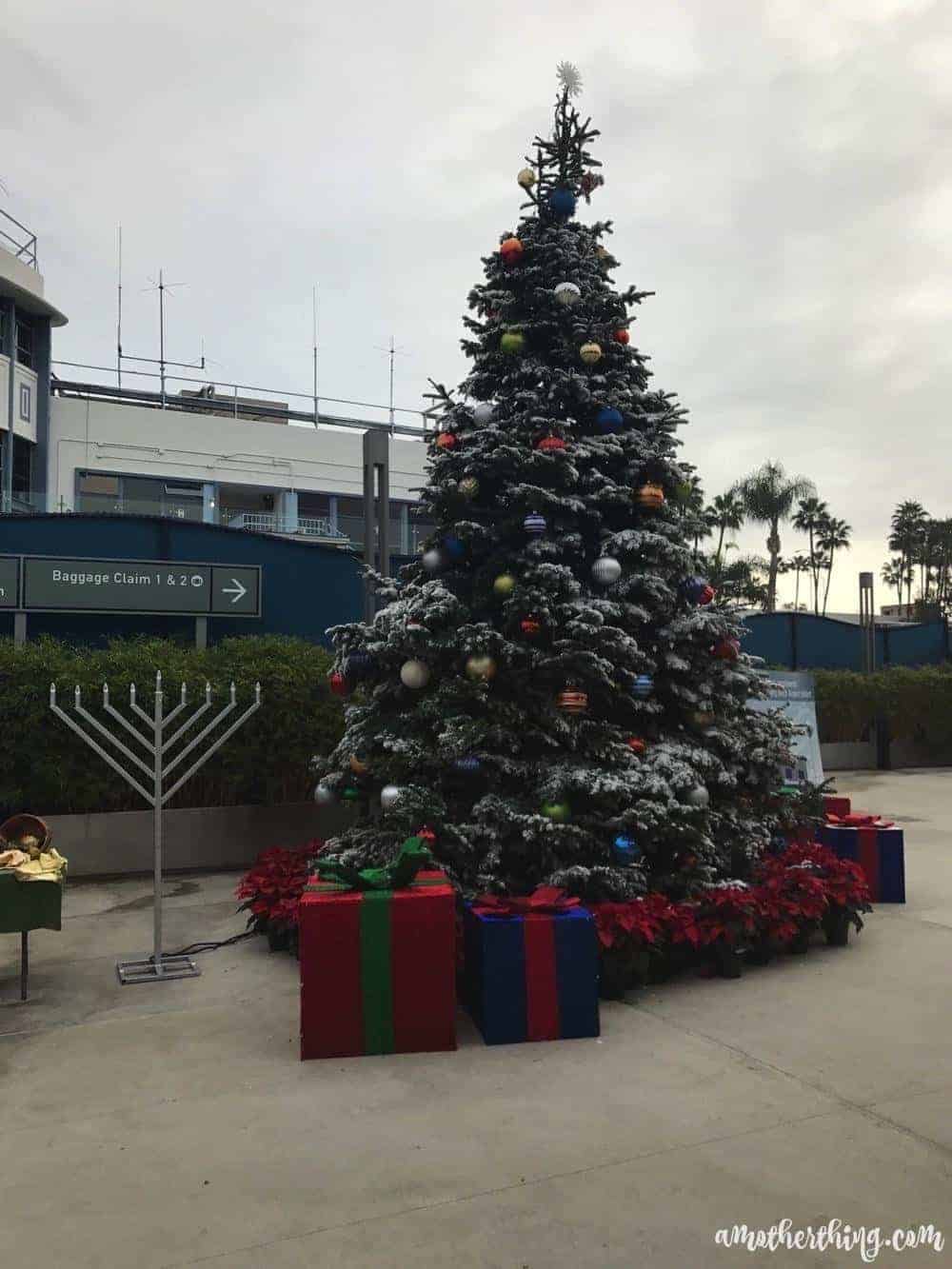 Holidays at the Airport

We had all sorts of last minute issues, of course. Besides the logistics of travel, making sure the kids were sorted for school and daycare, getting my mother in law the keys to our home and van, and figuring out how to get to the airport in time for our 8:15 AM flight when the kids’ daycare doesn’t open until 7AM, there was also a huge issue that I waited until the last minute to figure out – my dress.

The Christmas party was being held at a sort of cabaret club called Teatro Martini. The dress code is advertised as “elegant casual,” with encouragement to “don your best.” Plus, it’s a Christmas party. PLUS, I NEVER get to dress up. So the pressure was on to find something I could wear that would make me feel elegant AND confident. I ordered a dress off of Amazon which I LOVED, but I couldn’t figure out if it was appropriate or not. So I ended up heading to Dillard’s, where I found an amazing rose gold sparkly number with an amazing Old Hollywood vibe! Amazingly, despite being a size 12 (I wear a 14), it fit like a glove! PLUS, it was ON SALE! It’s normal price was $270, but it was only $155! Score! I also bought a plain black dress from Torrid, but it was not really a hit. 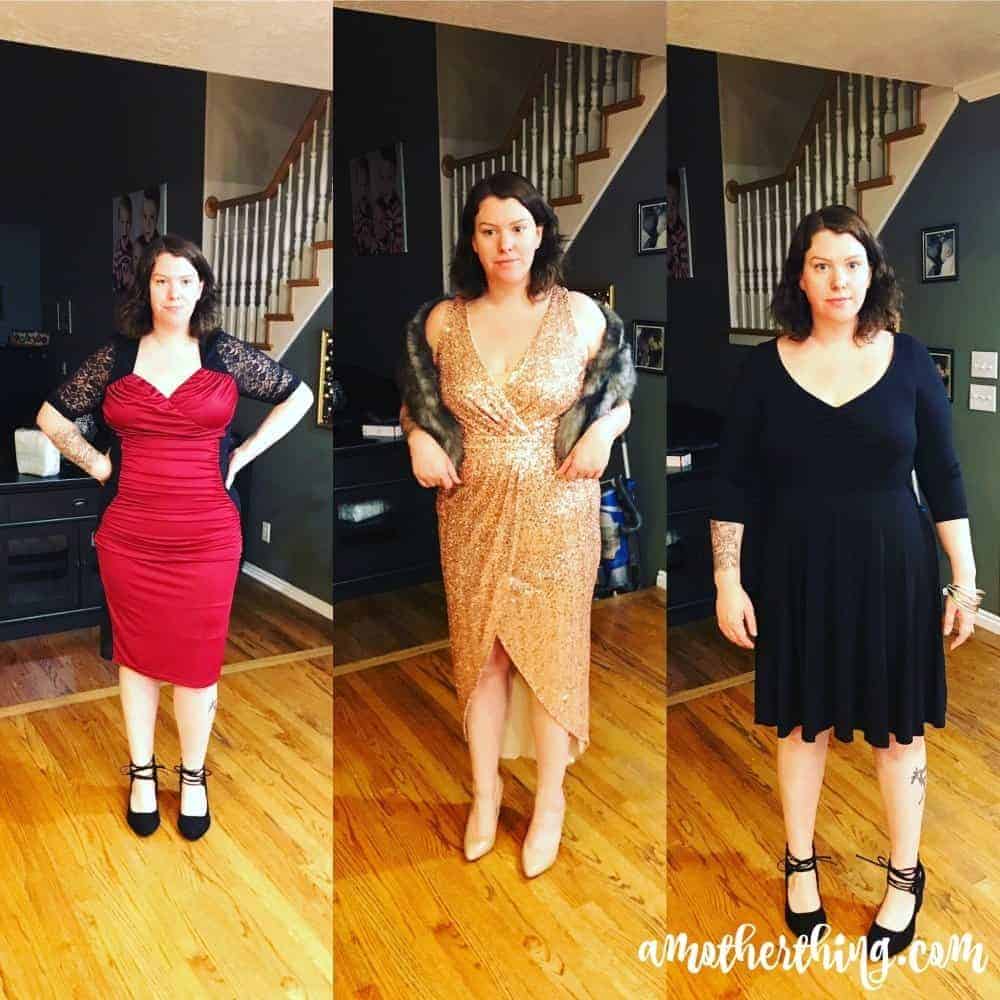 When I had a selection of dresses, I left it up to a vote on Facebook and Instagram, asking my friends which dress they liked best. Overwhelmingly my friends all agreed with my husband, and the gold dress won in a landslide.

I wore it to the party and had a wonderful time. The whole evening was so much fun. I’ll have a full review of Teatro Martini soon, so stay tuned for TONS of amazing photos! 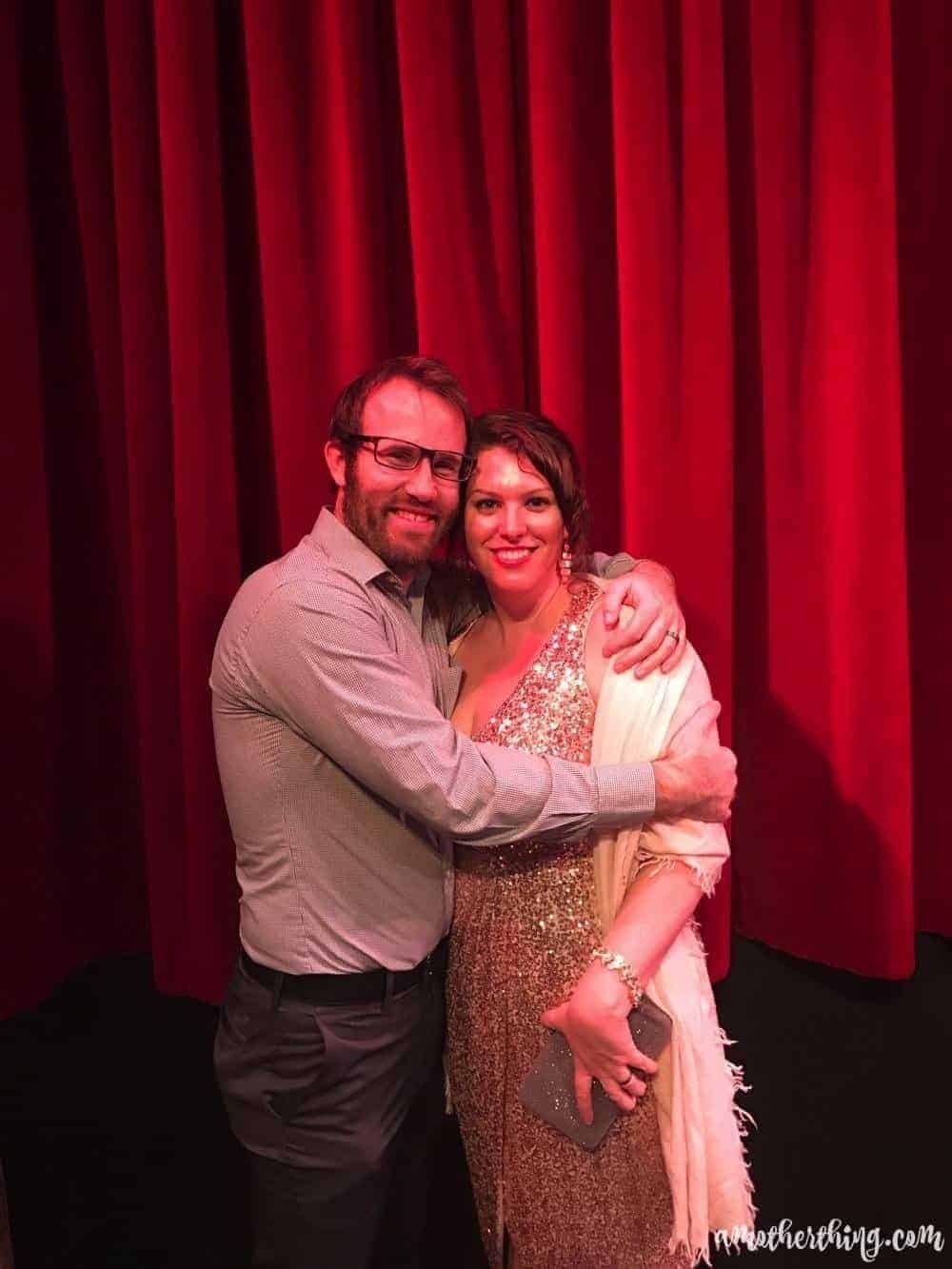 Sadly, I have no good photos of me in my dress. This is the best of the bunch. 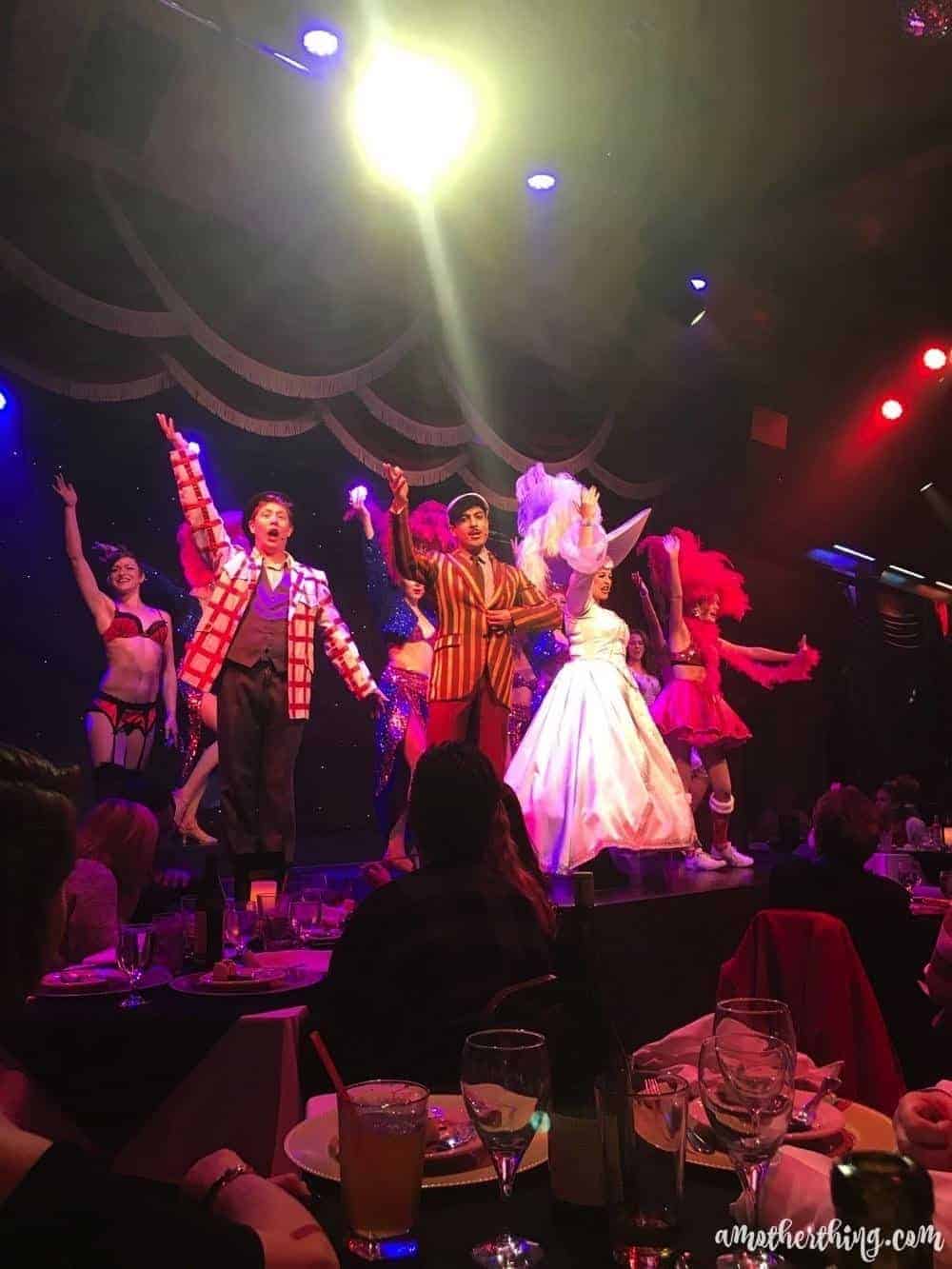 The finale of the show.

After the party, we were invited to continue on to karaoke with some of Mark’s friends/coworkers, but we decided to head back to the hotel and just go to bed. Mark had drunk a lot, and I was experiencing some dire heartburn and needed my meds. We knew we had a big day on Saturday, so a good night sleep was the only thing I wanted.

The next morning, we ate a quick breakfast with the rest of the crew before most of them took off back to Salt Lake. One of them, our friend Chavis, was staying with us to hang out. It was really difficult to decide where to go/what to do with our day, as we knew our flight home was at 7:15 that evening. Disneyland, as I mentioned, was minutes away, as was Knott’s Berry Farm. We had originally planned on going to one of them, but when it came down to it, none of us really wanted to do it. Chavis was too hungover, Mark gets motion sickness on roller coasters, and I don’t really enjoy amusement parks unless the kids are there. So we decided to head out to Hollywood and see the sights! 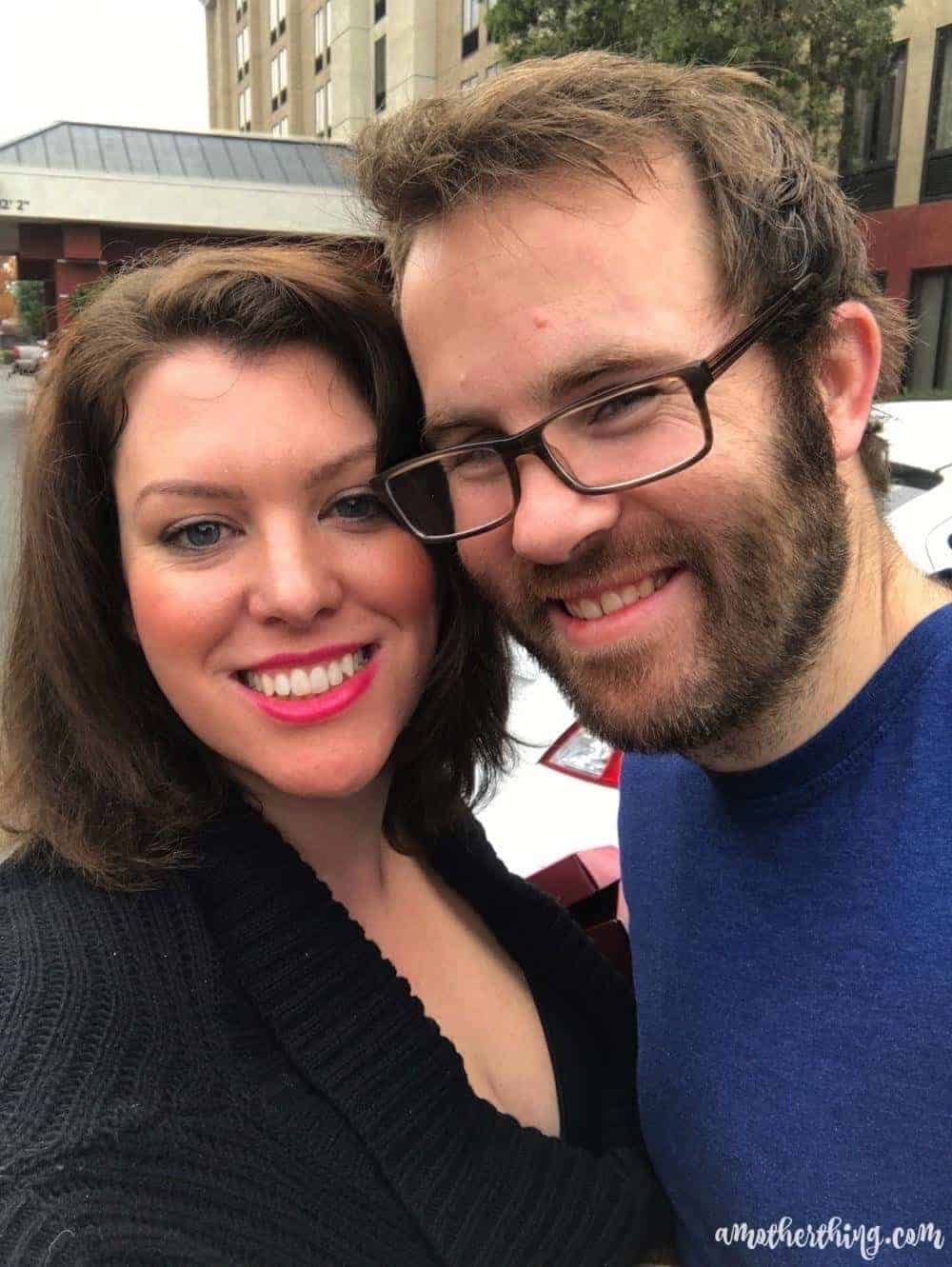 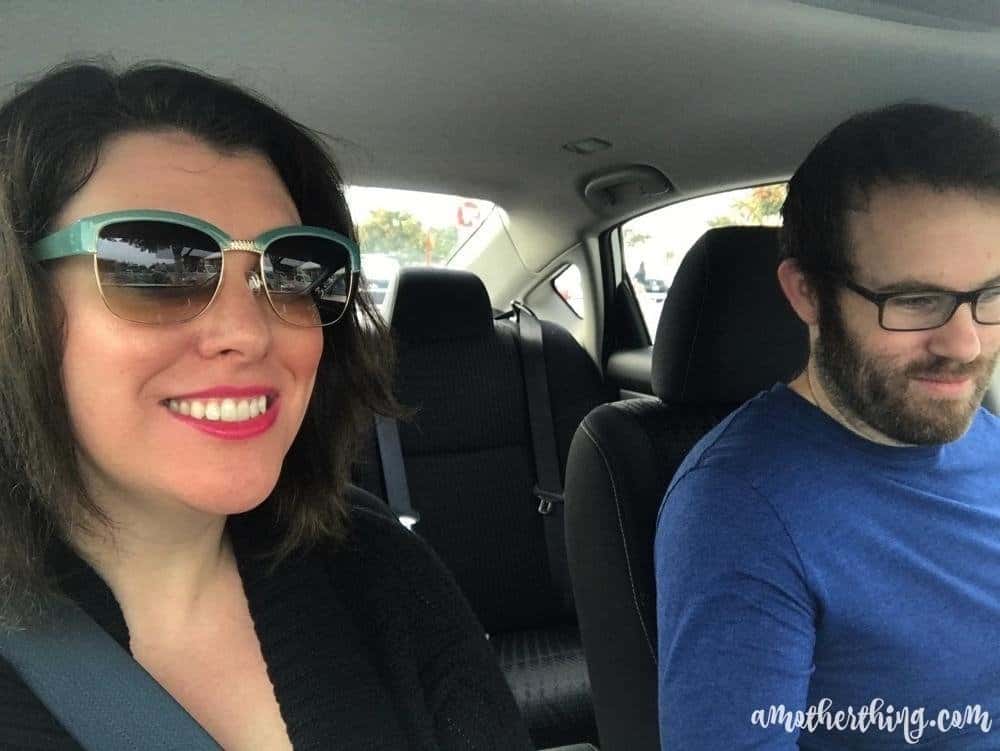 In the car, waiting to leave 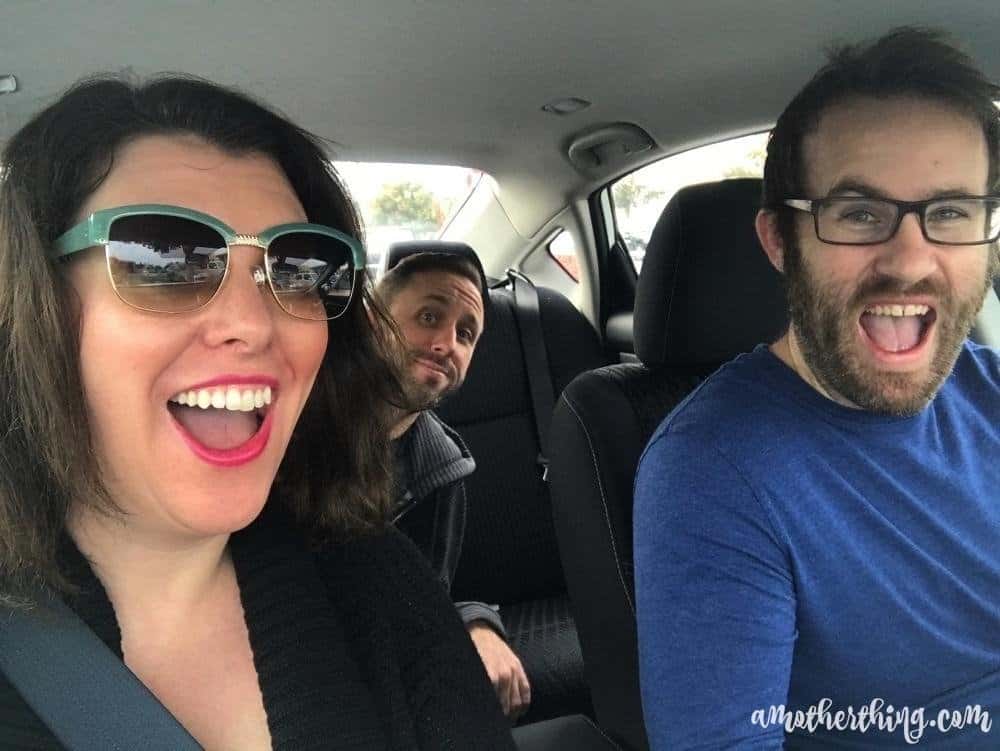 It was around a 40 minute drive, and we got there around 9:30 AM, and I could see the famed Hollywood sign right from the car, though I missed the opportunity to take a photo. Thankfully I later got one as we took a tour bus up Mulholland Drive. We parked in Madame Tussaud’s parking garage and headed off to explore. We looked at Grauman’s Chinese Theater and walked along the Walk of Fame, taking in all the stars! 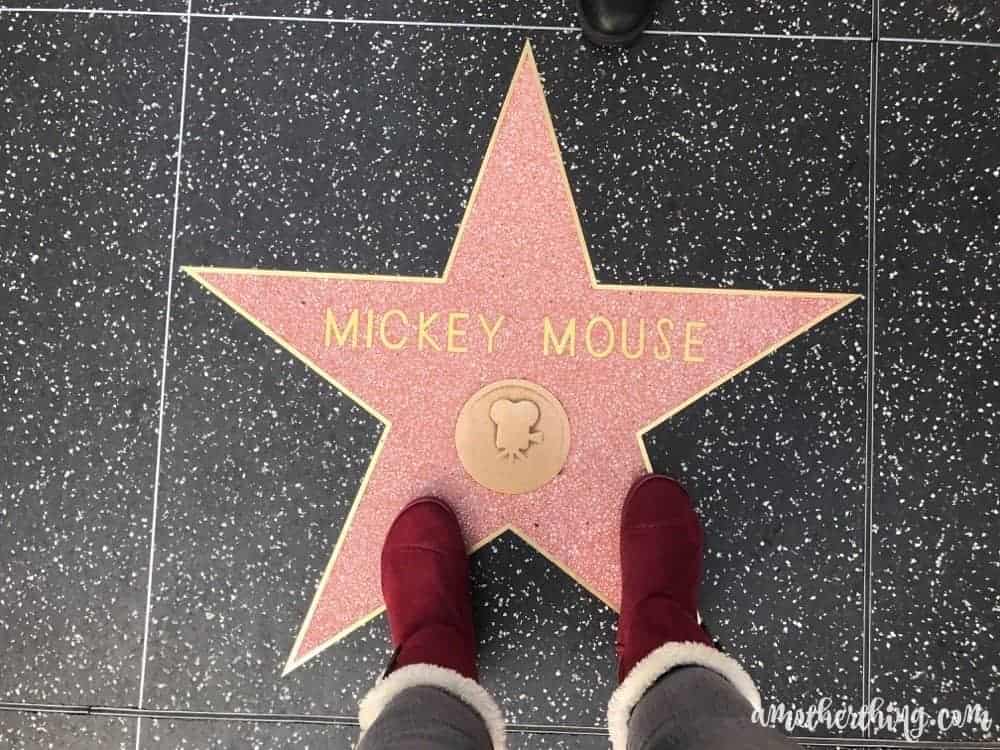 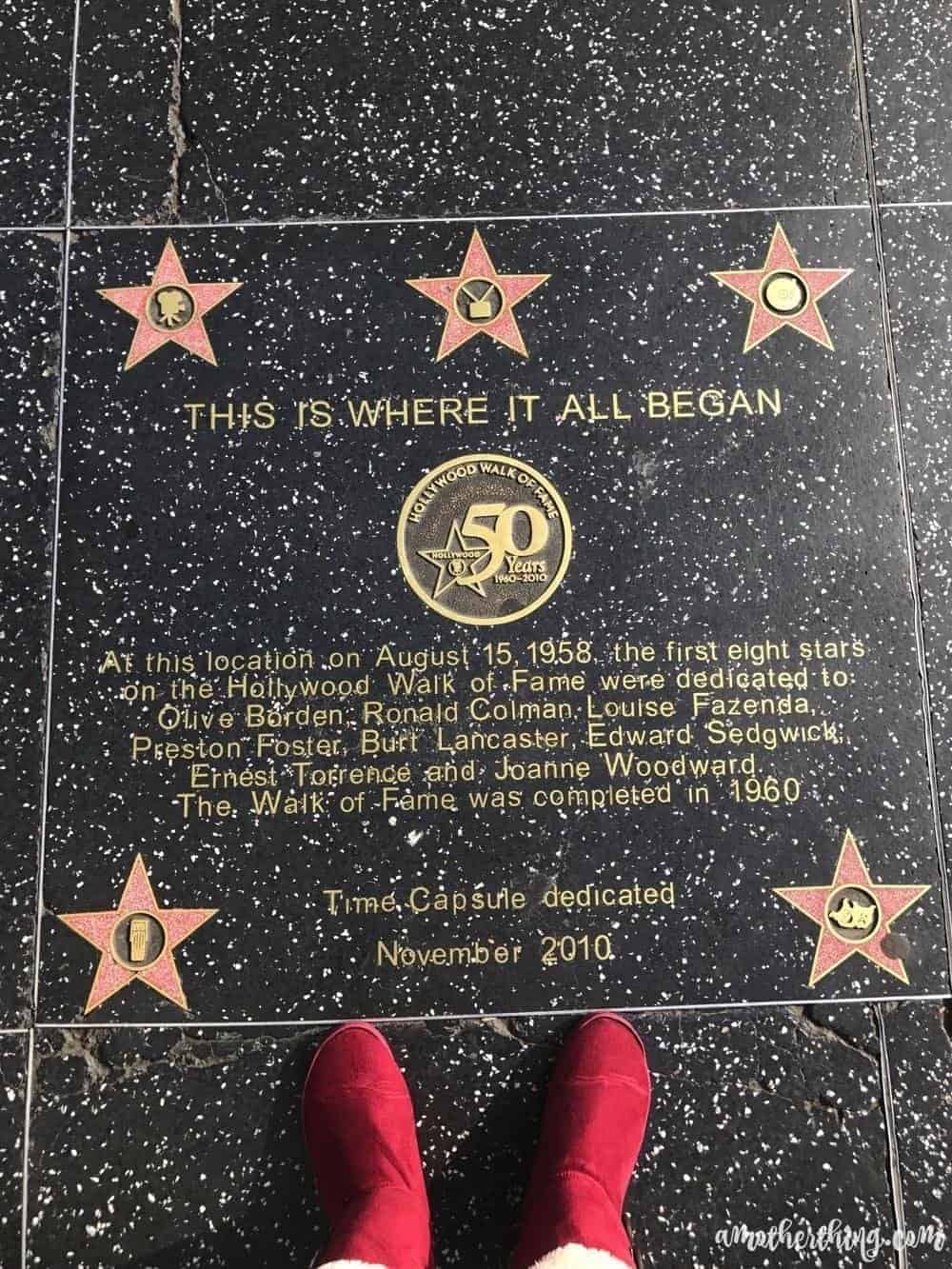 We had to deal with a bunch of of people at a pro-Trump rally who were trying to start drama with every passerby, and there were a TON of religious proselytizers yelling in our faces. Some Hare Krishna’s presented me with a copy of the Bhagavad Gita, which I was actually really happy to receive, it being on my book bucket list for years. 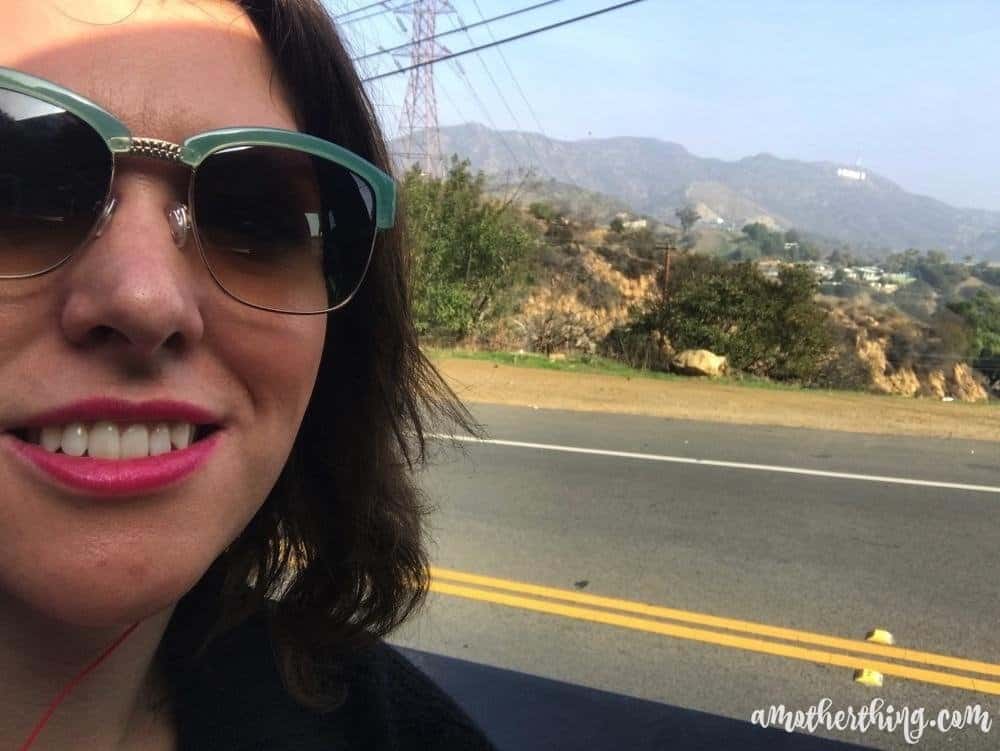 Really wanted a photo with the Hollywood Sign. Best I could manage. 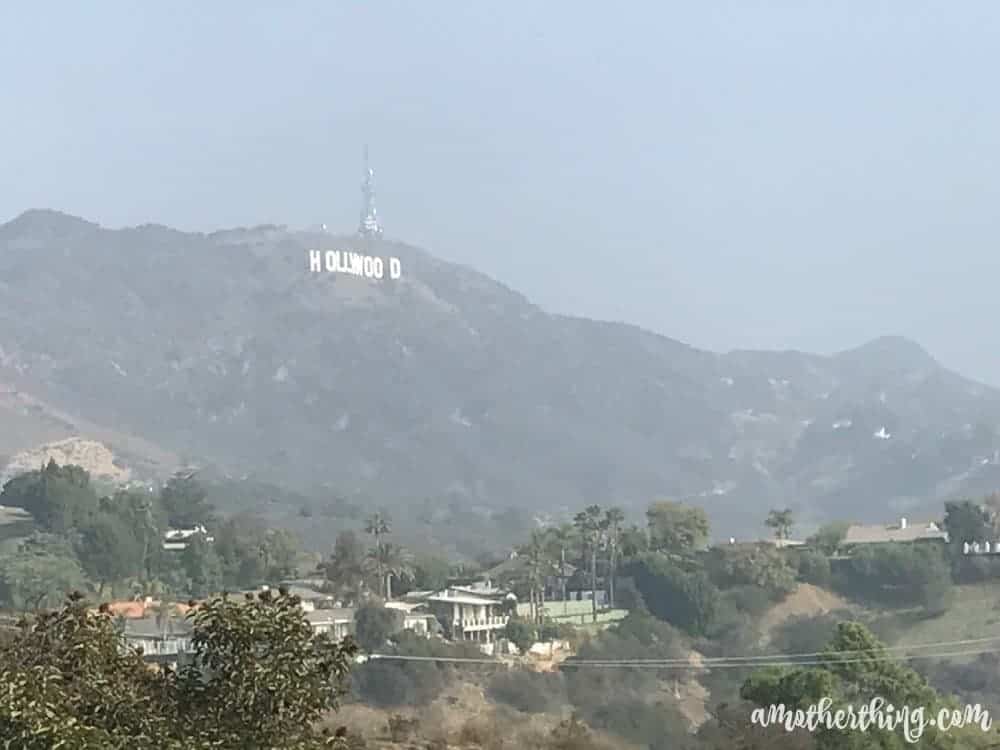 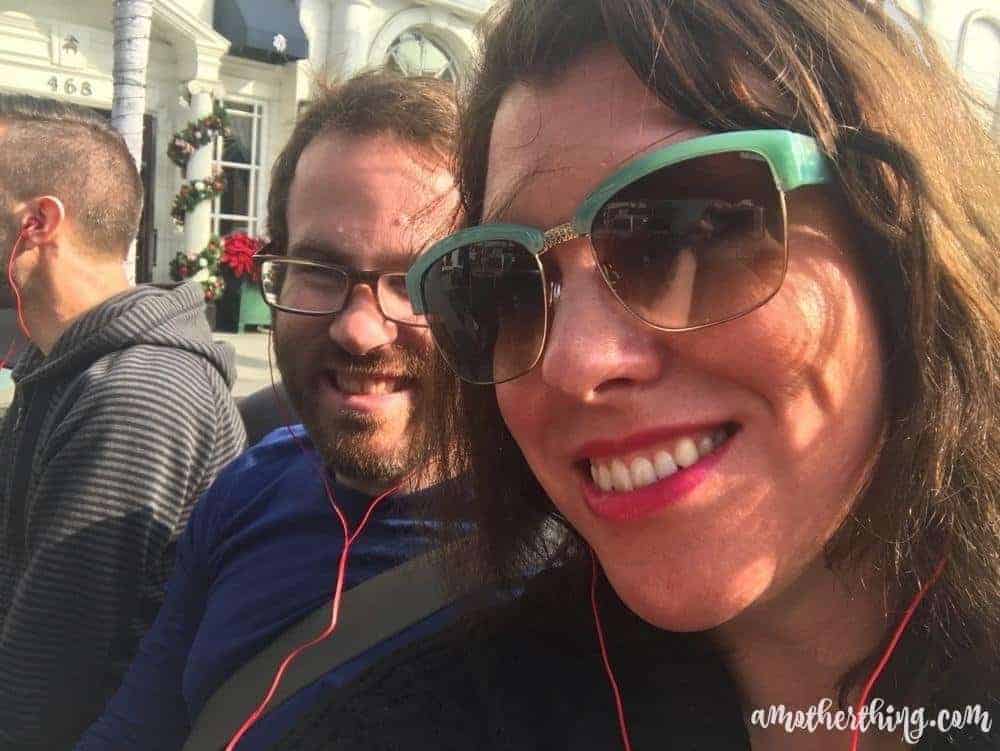 We ended up booking onto a Starline Tour, a two hour trip in an opentop Ford, where we explored the various Hollywood neighborhoods, including Mullholland Drive, Bel Air, Beverly Hills, Rodeo Drive and the Sunset Strip. We saw tons of the homes of various celebs, though I found it a little weird to be peering so closely trying to get a view inside someone’s gates. 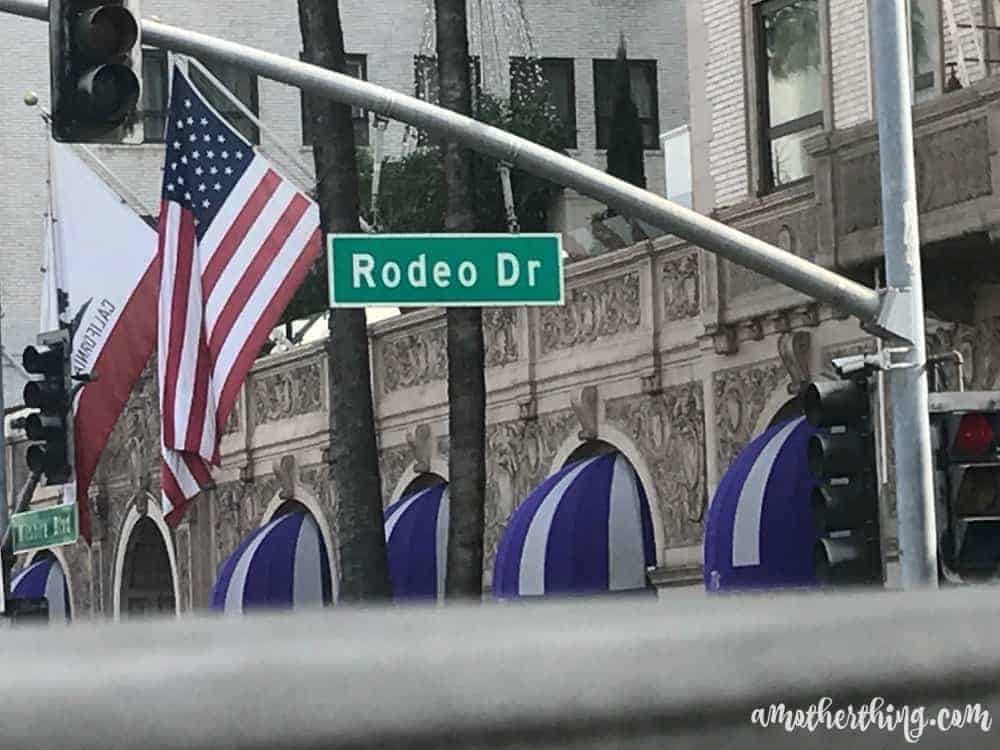 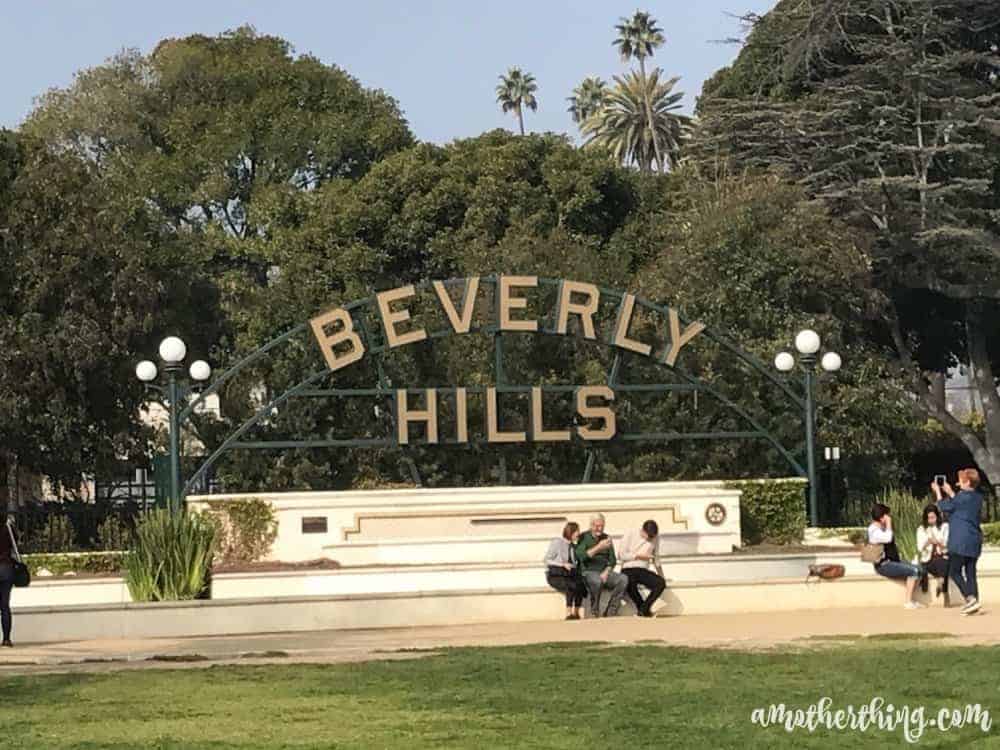 After our tour, we grabbed some lunch at Mel’s Drive-In after TRYING and failing to make it to Umami Burger on a friend’s recommendation. The food was not so great, unfortunately, and we all left feeling we’d paid $60 for something we could have eaten at Burger King, but the experience was fun! 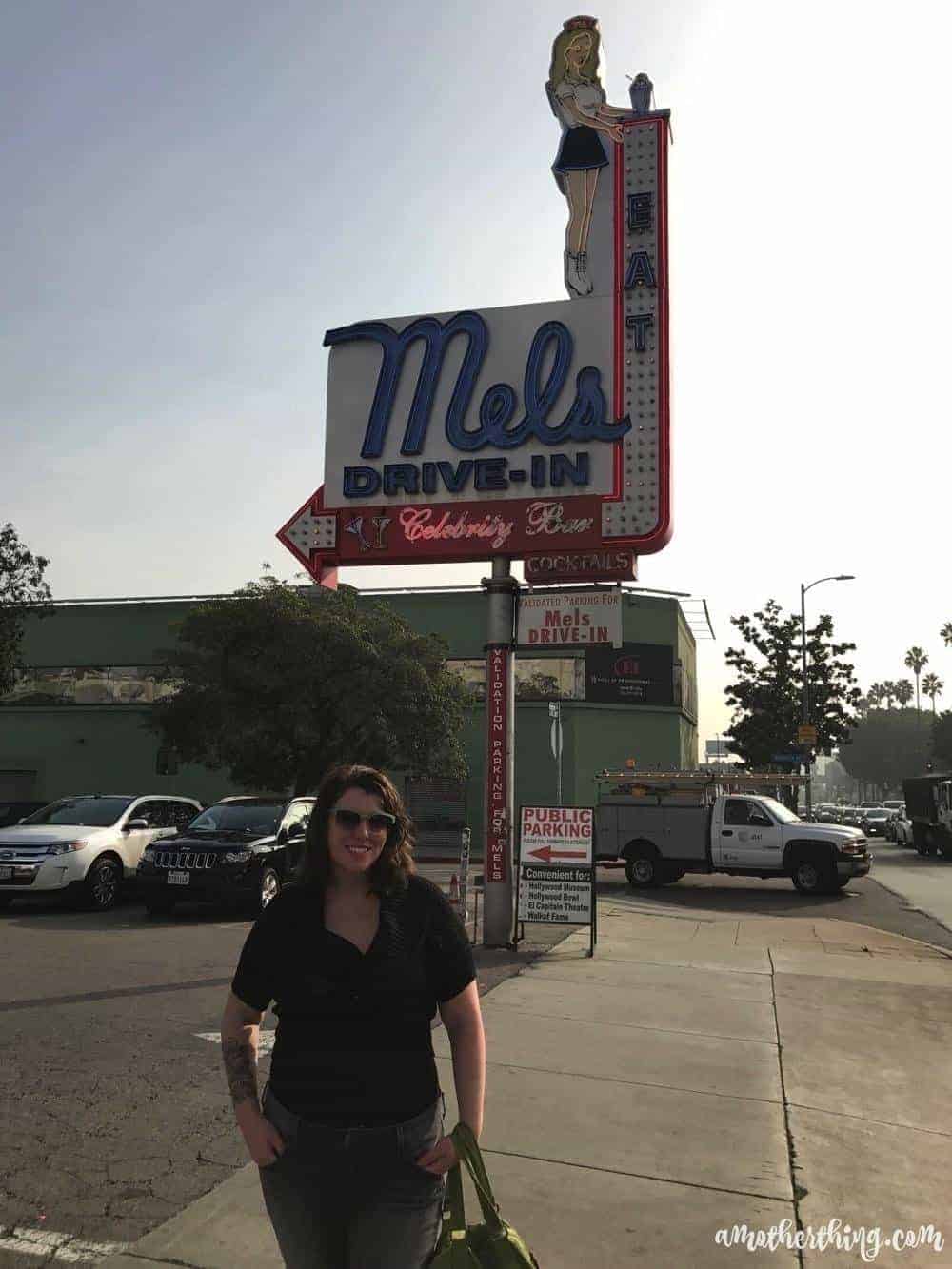 We were going to go buy some souvenirs and then hit the beach, but we ended up being pulled into a Game of Thrones special event being held nearby! After registering, we waited in line for quite a while before finally being allowed in to experience a behind the scenes look at season six. It was so much fun, and we spent around 90 minutes there, just doing the special photo ops and interacting with some of the fans who had dressed up in costume to attend! 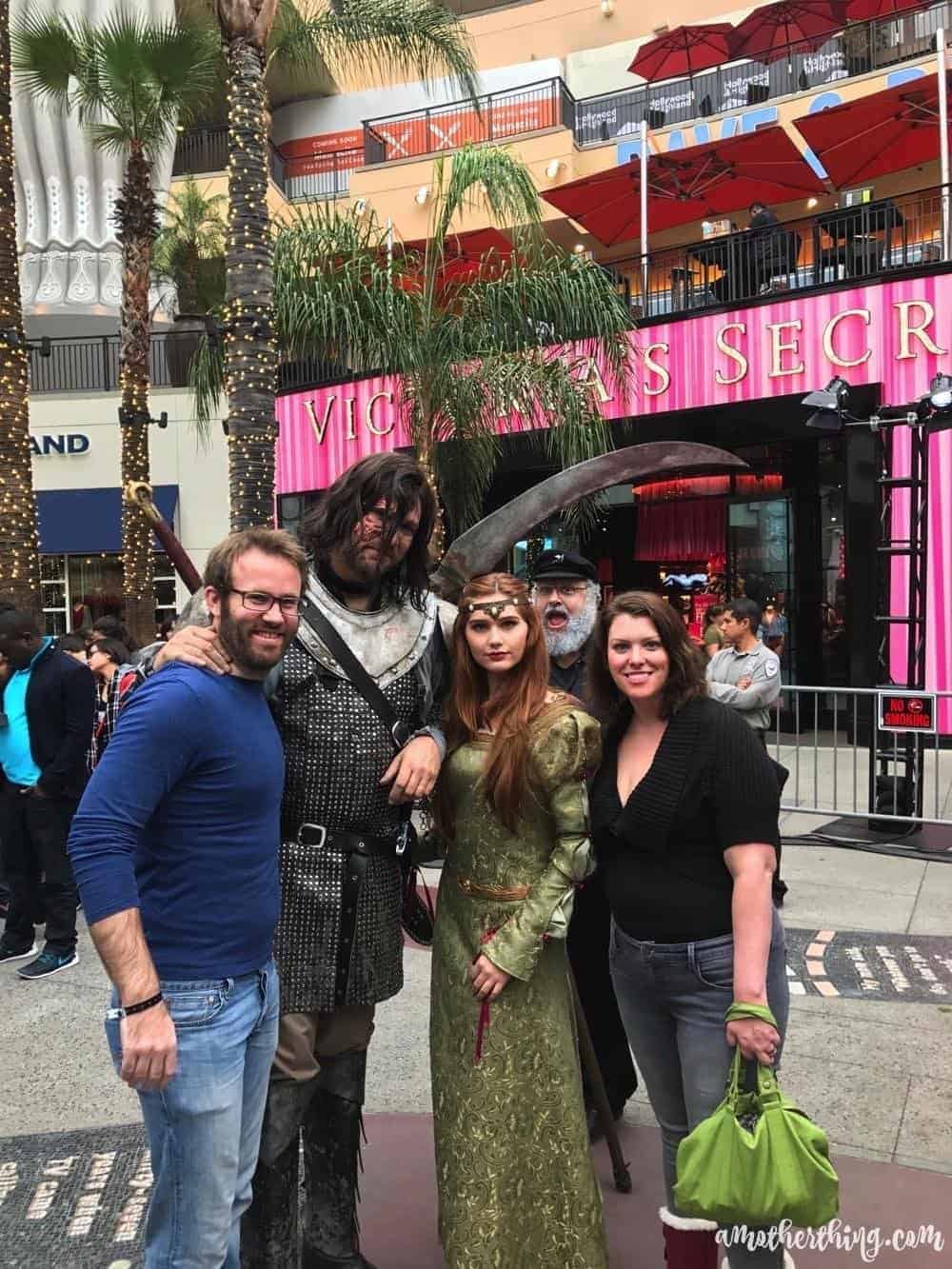 Finally, we were fairly exhausted. It was around 4 pm, and we wanted to head back to see the beach for a while before going to the airport. We drove another 40 minutes to Bluff Park in Long Beach, and we walked along the ocean for a bit. I took my boots off and walked into the Pacific for a few minutes, but it was seriously cold, so mostly I just kind of wiggled my toes in the wet sand and watched the sunset with my guy. 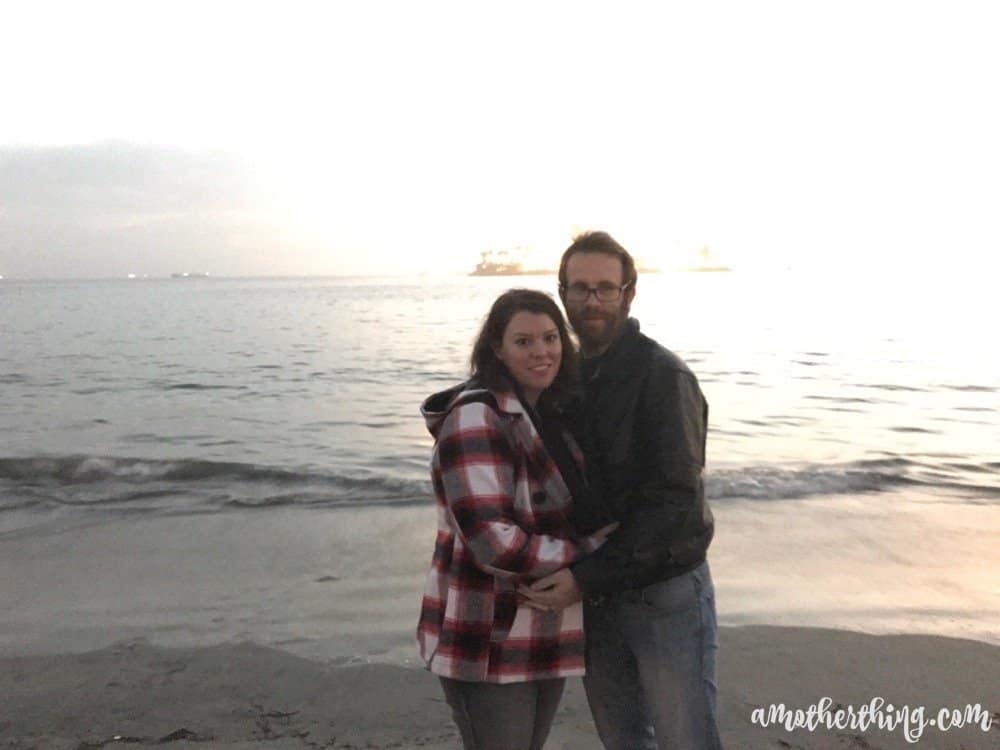 My awesome husband and me at the Pacific Ocean 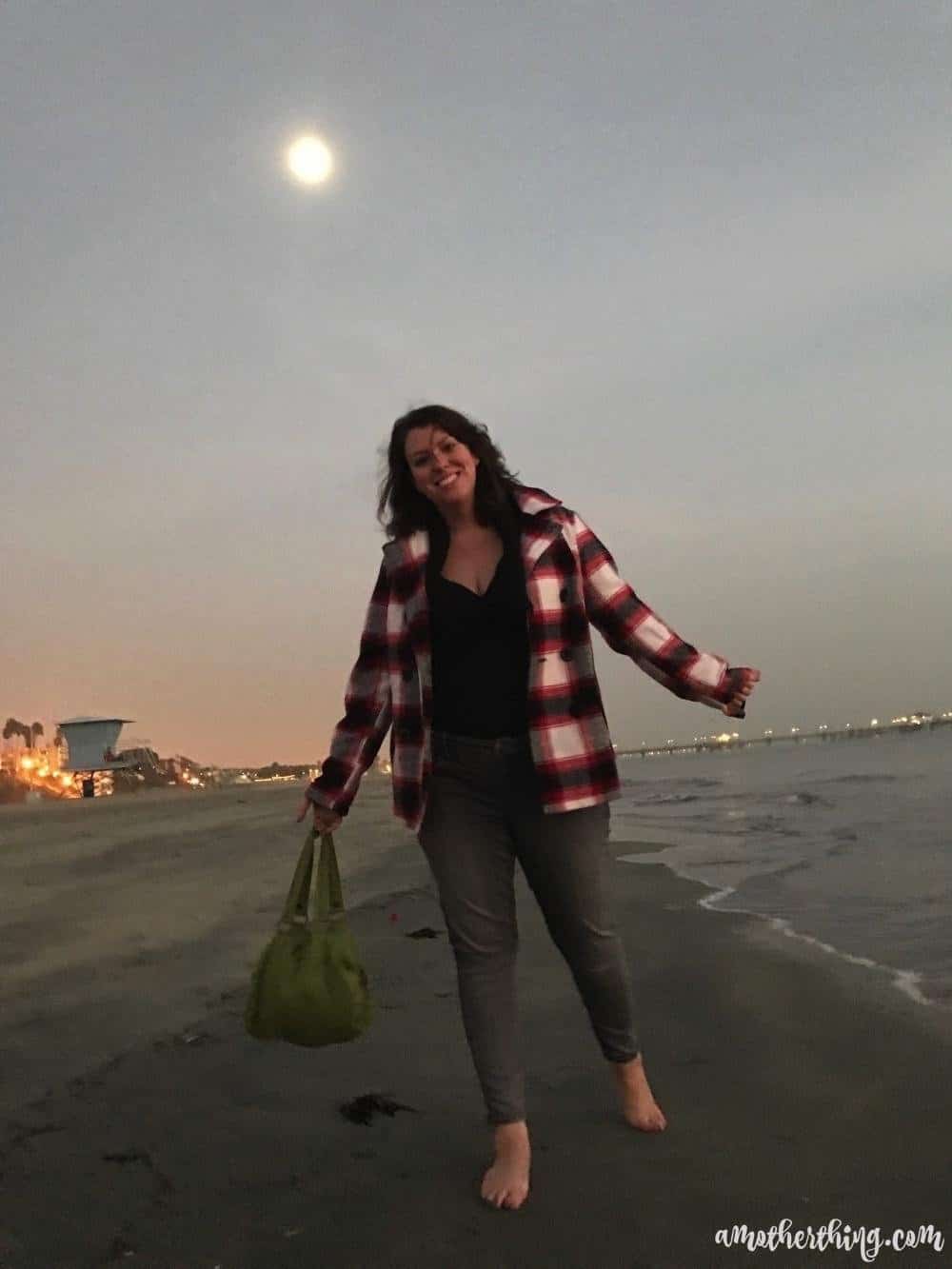 Walking along the beach

Finally, it was back to the airport. Our flight was slightly delayed, so we got some food next to the gate and eventually returned home, exhausted and elated. I can’t believe how much we fit into barely 36 hours away. It felt like we’d done SO much! 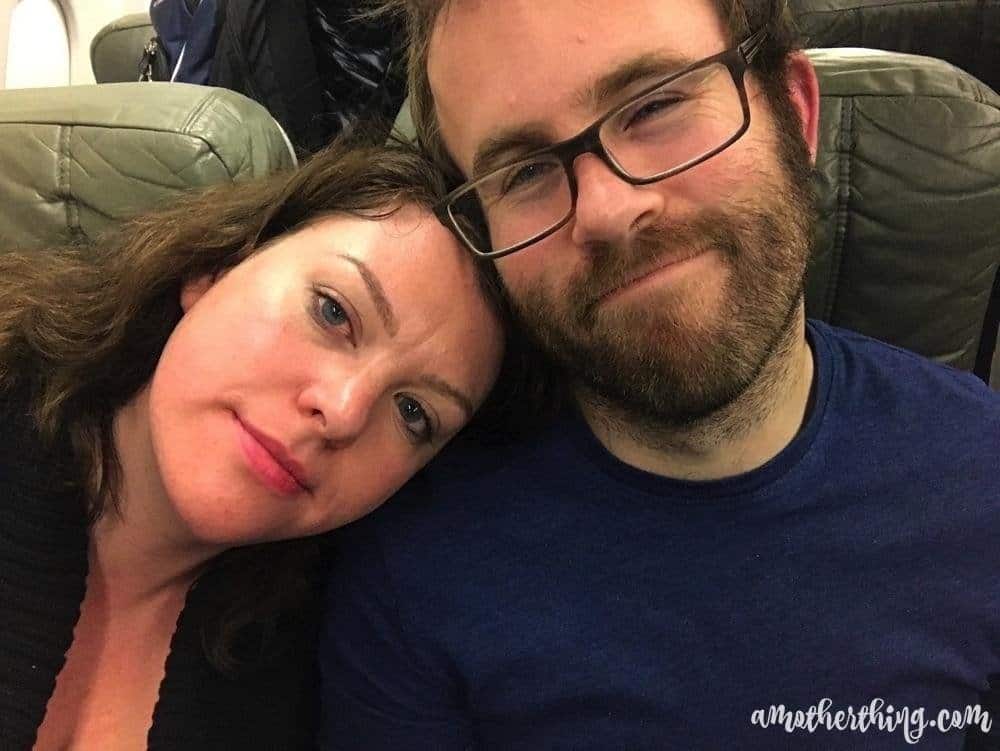 Can you see the exhaustion on our faces??

I have literally about 1500 photos to go through, and I plan on sharing them in individual posts over the next couple of days. I want to share some of the fun with you all, as it was really a weekend to remember. And I’m happy to report that all three kids were happy and had a great time at Grandma’s house! 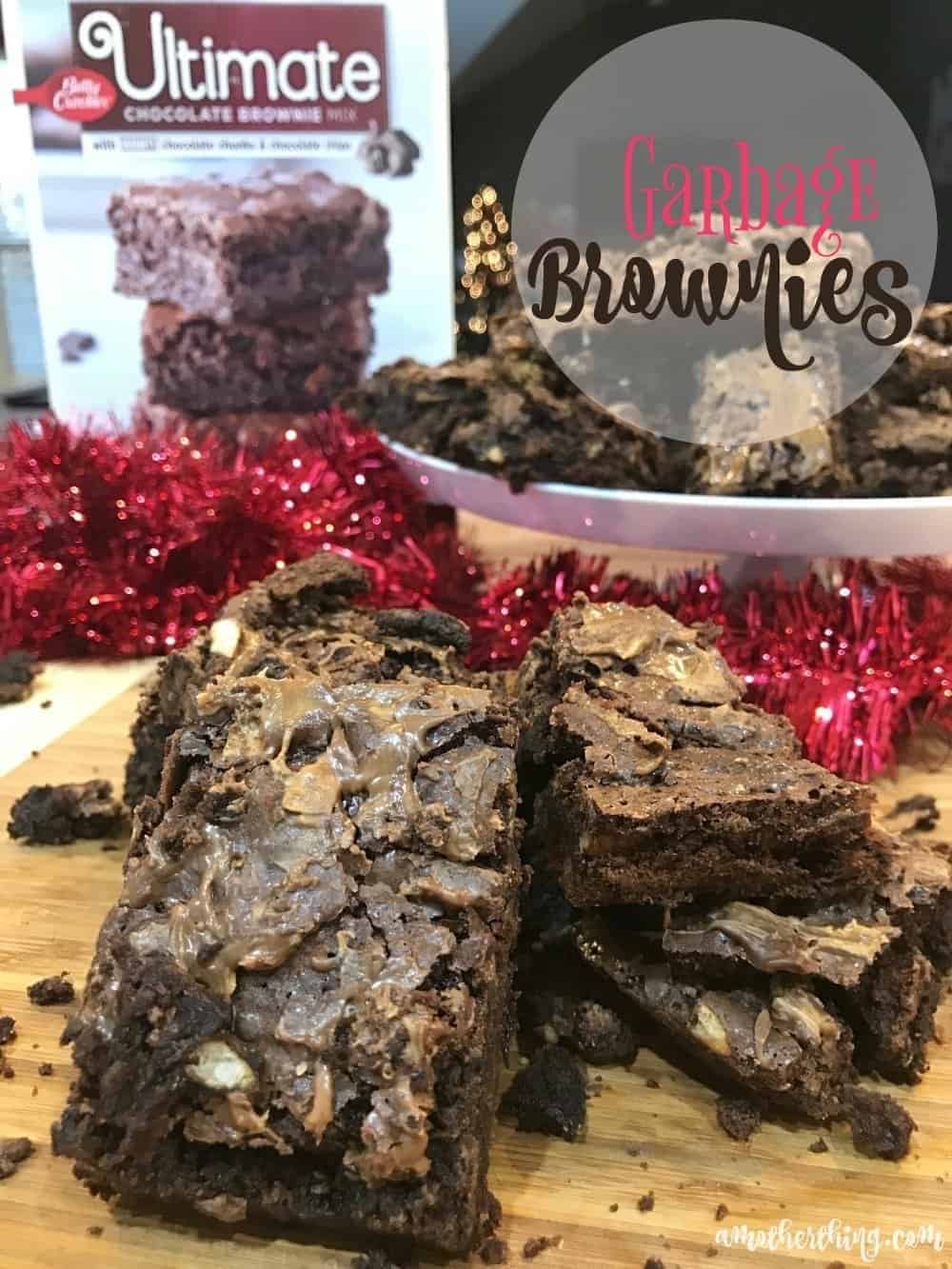 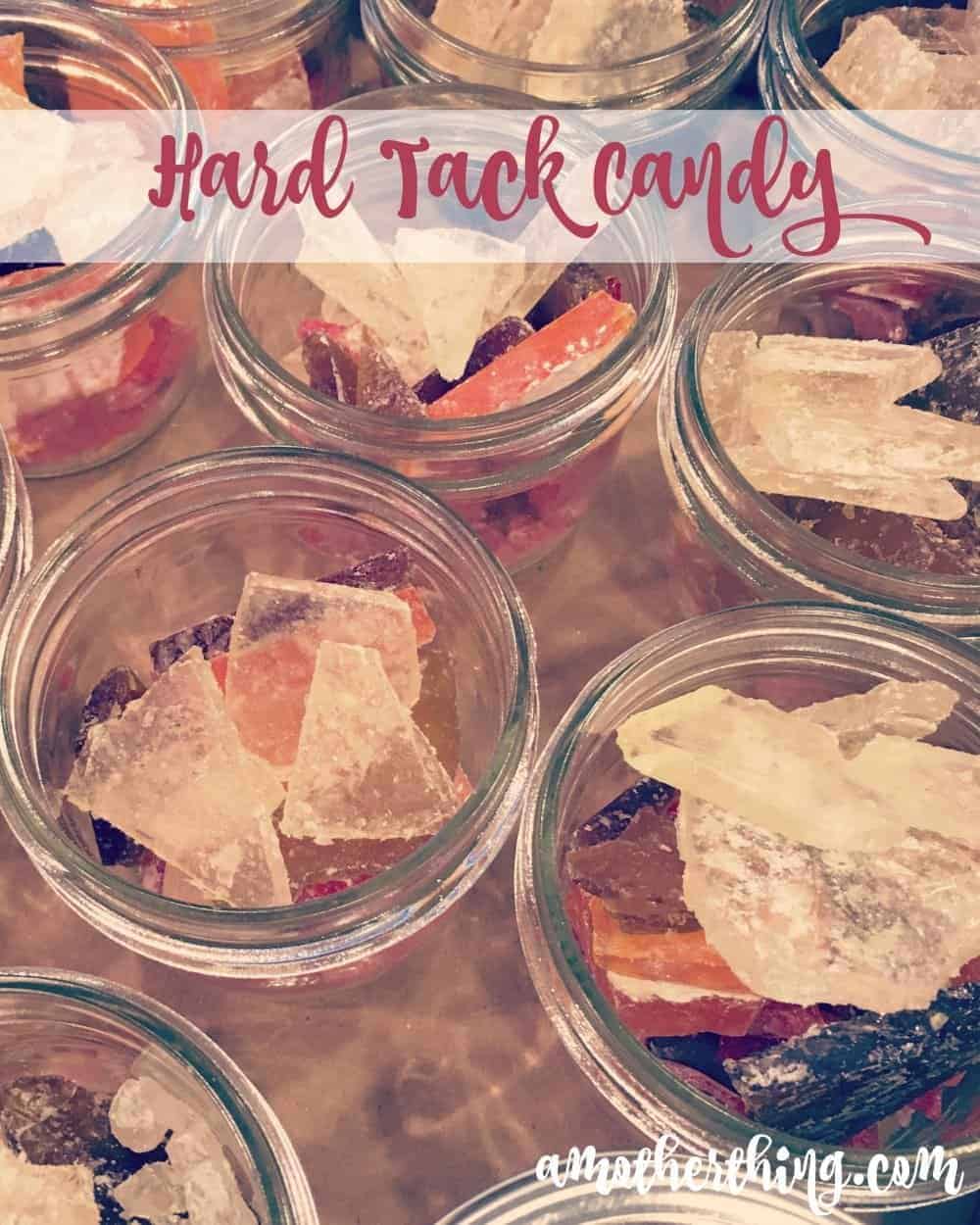