Poor poor Dexter. You may recall last week when I wrote about how his pediatrician perforated both of his ear drums and and the resulting drama. It was a difficult time, and the poor kid was in a lot of pain. To properly assess the situation, though, and to decide what to do regarding any potential legal claims, I needed to get him to a specialist. I called up our doctor’s office and asked for a referral to an Ear, Nose and Throat doctor.

Luckily, they were able to see us quickly. But unfortunately it was an appointment that didn’t go very well. Dexter was absolutely hysterically upset at the thought of ANYONE looking in his ears. I don’t blame him! He’s been traumatized!

We tried enticing him with kind words and sweet treats. But no amount of lollipops or fake giggles would stop him from screaming, kicking and crying when anyone came near. 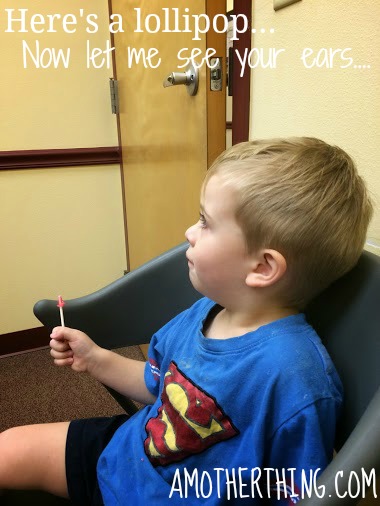 I was given instruction for the “ENT Hold,” which involves having the kid straddle mommy, chest to chest while pinning his arms under my armpits so he can’t thrash and holding his head still with my chin. That didn’t work either. So we were forced into something drastic. The papoose.

What is a papoose, you ask? Well it’s where the child is strapped to a hard plastic board, and his legs, torso and arms are held tight by velcro straps, while the head is forced forward by its own strap. Technically this is supposed to work well. But I think that Superman shirt my kid was wearing gave him super human strength because that kid managed to break his bonds over and over again. It ended up with FIVE people (including Mark and me!) holding him down while the doctor tried her best to look in his ear. 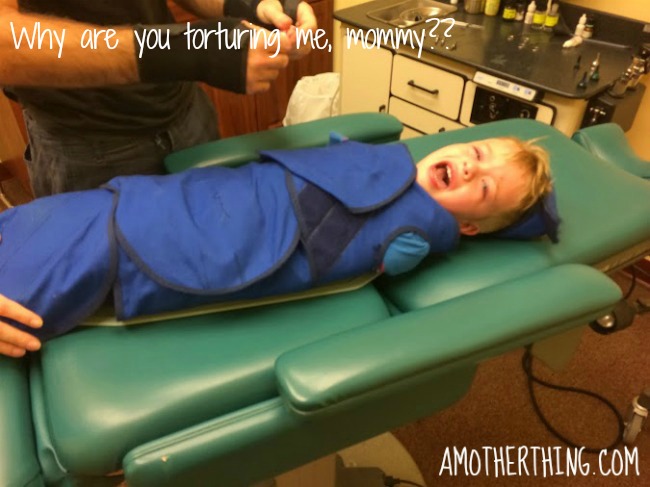 It took a while, but eventually we all had to admit crippling defeat. This kid was stronger than all of us, and there was no way she’d be able to do anything without putting him to sleep.

So we rebooked an appointment for a week later, and in the meantime they booked us an operating room. The doctor wants to knock him out and then go in and clean his ears properly and then insert tubes.

Today was the second appointment, and it was clear from the second we got in there that Dexter would never willingly submit to an exam, so we were sent home with a surgery date.

So now we have this to look forward to. My lovely not-yet-three years old toddler will be having his first general anesthetic. His first IV. His first surgery. We get to be there at 5:30 AM, and I’ll be honest – I’m nervous. I know kids have tubes put in all the time, but you just never know, right? It’s hard. So hard.

I’ve been warned that kids come out of this surgery either completely docile and like nothing happened or like raging bulls who are really PISSED OFF. I am prepared for Dexter to be the latter. I’m pretty sure he’s going to be a little angry at us. But hopefully it will improve his quality of life and we can all breathe a little easier.

Have you ever had a child go through surgery? What was it like? Did you feel totally helpless? How did they behave afterward?

You took photos of him while he was screaming in terror? Jesus.

It`s really hard to watch your child go through it, but it helps to know he`ll be better after the surgery. My daughter had tubes put in 2x, at 18 months and 3 years. Really hard to sit in the waiting room each time. Lots of popsicles and a disney princess balloon helped her to forgive me the last time. Hope Dexter does well!

I'm so sorry! Both of my bits had to be hospitalized when they were two yrs old due to really weird infections. The hardest part will likely be the IV insertion which they'll have to do before they knock him out. Ask them to put the numbing cream on the site and then wait for it to work. The IV is another one of those procedures that requires them to be absolutely still and it does hurt! But, it is pretty quick - faster than the ear exam. Once they have the IV in, they can easily give meds to calm him or sedate him completely, so it really is going to be the first big thing.

Oh my goodness Katie. This sounds so stressful and at a very stressful time of year. I hope everything goes smoothly and Dexter recovers quickly.

Oh my, that must have been so traumatising for him and you. I think I'd cry my eyes out, if I had to pin Amy down like that and see her so upset. I do hope Dexter's surgery goes well and that you have a pain-free and relaxed Christmas x