When we found out we were pregnant with this baby, Mark’s immediate reaction was to declare his intentions on getting a vasectomy. While he loves me and loves our children, he does NOT love pregnancy’s effect on his wife – neither physical  nor psychological. While initially we both were on the same page with how many children we wanted (we discussed it in depth on our first date), after Dexter was born, he admitted that he was a little nervous to have any more. Once Daniel came into the picture, he was quite happy to stop there. And so when we got the big news earlier this year that we had yet another on the way, he was adamant that there would be no more.

I admit, as much as I love my babies, I can’t imagine going through another pregnancy. As much as I mourned our last chance to have a little girl, I can’t ever put myself through this again.

So when my OB asked at last week’s appointment what my plans were after this, I laughed and said, “this is it. No more.” She asked if I was sure, and I told her that Mark was already planning his vasectomy for as soon as possible after the birth. She asked if I was interested in having a tubal ligation, commonly referred to as having my tubes tied.

Right up until the very second that she asked, I hadn’t ever considered it an option. My mother had had her tubes tied after her third child was born, and when he died of SIDS at 3 months old, she had had to go through the ordeal of having a tubal reversal.  Knowing this, I have always said I would never have my tubes tied, “Just in case something happened.” But lately, through many talks with Mark and with my own understanding of my body and its limitations, I have realized that pregnancy is not my friend. I am great at actually giving birth. Both my kids have basically walked out of me, with little effort on my part and no rips, tears or scars to show for it. But the 9 months leading up to that point? Not good…

My doctor explained that if I opted for this option, it would involve them making an incision into my abdomen (providing my uterus was in the right place after the birth), pulling through my fallopian tubes and snipping them. Recovery would be fairly easy, and I should be able to go home on the same time scale.

She asked about my periods and whether I was regular. I told her that I am not ever regular, having dealt with PCOS my whole life, and she said that I needed to consider other birth control options. She strongly suggested I consider an IUD, which would last for five years and could be inserted 6 weeks after the baby came. She said it would make my periods lighter, regular and may even get rid of them all together. She was very enthusiastic about it, and she said she thought it may be a better option. Mark, too, thought that this was a good idea.

I decided to take the literature home and read about it and think what I wanted to do. But inside, I kind of already knew which way I was leaning. 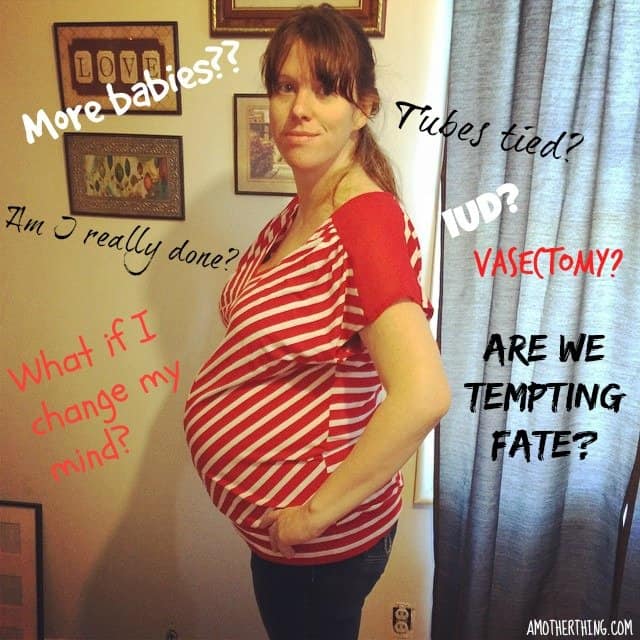 When I really think about it, there are pros and cons to each decision. Mark will be having a vasectomy either way, just as double insurance since we clearly are INCREDIBLY fertile together. But a vasectomy can take months to become 100% effective, and even then it may not take.

So here’s what goes through my mind as I consider my options.

The doctor warned me that tubal reversals are hardly ever effective, so if I changed my mind, I would probably still not be able to get pregnant. I had to laugh. I am the PRODUCT of a tubal reversal. My mother had hers done fairly immediately after my brother’s death, and while it took her a couple of years to actually get pregnant again, she did it. And after I was born, she even managed to do it again and have my little brother. It’s clear where my fertility comes from, isn’t it!?

At the end of the day, the worst fear I have about having it done is that something will happen to one of my children. This is a fear all parents have, and it’s horrible to contemplate. But I have unfortunately seen it happen to too many people to believe it can’t happen to me. And so I fear – if I’ve had my tubes tied and then the worst happened, would I want to have another baby?

The answer is hard… Of course I would WANT to, but I don’t think I would. I think I would be heartbroken and bereft, and I would try to convince myself that another baby was the way forward. But right now, I genuinely believe that I couldn’t do it. I know that I can’t go through it again, and the easiest way to ensure it is to have my tubes tied.

So next week, when I go back to the doctor, I will give her my answer. Unzip me and snip me! I am done.

Just found you via Ello! I've had an IUD and have also suffered with PCOS (Great for you not to have fertility problems with PCOS!!) and I have to say I loved my IUD. It was hurtful when they put it in and I was not expecting that but I loved it. I'm honestly regretting not just putting another IUD in instead of getting my tubes tied. I also have difficult pregnancies and we had decided after my last one that we were done. I've been having issues losing weight this time around and IDK if that has anything to do with it. I'm back on Metformin but no real weight loss. But google the issues women have been having after tying their tubes! I wish I would have done that before hand because there's no real reversing it for me. It's not covered by insurance so I'm stuck with my decision. At least an IUD if it doesn't work for you then you can just get it removed. I had mine in for 18 months and went right back to normal after removal and then I was pregnant right away. Just a thought!

This is such a brave topic to write about, especially when you are going through so much uncertainty. When I went for my first growth scan and was told that baby was most likely to be delivered at 34 weeks, be very small and weak for that gestation and require lots of special care, the doctor also asked me if I intended to have more babies after this one. Rather than tell her maybe, maybe not, I told the truth and said that 4 was our number, had always been our number. She then proceeded to advise me to have the same procedure as you are considering and told me that it could be done at the same time as my section. At the time a VBAC was still very much an option to me and I was so upset. But thinking about it, I knew it made a lot of sense. This pregnancy has not been kind to me and the chances of having another baby with issues will only increase if I were to fall pregnant again. But I couldn't, and still can't, shake the feeling if dread that comes with the option of no more. Especially when in one breath the dr is saying that our baby could be gravely poorly, and in another cutting off all chances of another one. ITs such a hard decision to make and I know that whatever happens you will make the right one. I still have not given my answer and not sure I will ever be able to x x x x

My first pregnancy was great. Miscarriage followed that baby. My next (and last) pregnancy was awful. I wasn't even sure I would make it the delivery room with my last pregnancy - super stressful. Bleeding through week 34 and the cause was never found. I had an IUD following that pregnancy and it was awful so I decided to have a ligation along with an endometrial ablation. BEST DECISION EVER. No regrets! Good luck to you!

#3 is going to be a year old next month and I am still trying to figure out what I want to do for birth control. I am definitely not having anymore. I had planned on the IUD but I just don't think I can do. The thought of something up there all the time, the possibility of it coming out, and I've heard it is extremely painful to have put in. Decisions, decisions.

I hady tubes tied 4 months ago when I had my 3rd baby... Everyday I am thankful I did it. Aunt flo is out of wack for me because I'm breastfeeding but I do get her so far its 36-45 days between and not bad. The only issue I have is I can tell what side I ovulate from because that side hurts for a day or two. Not oh my gosh i am gonna die hurt just twingy uncomfortable pain. Other than that its awesome. I do still wonder if its the reason my period came back so fast this time... With my other two I had 6 months to a year.

Thanks for sharing your experience. This is a tough issue every couple has to face when they are done having kids.