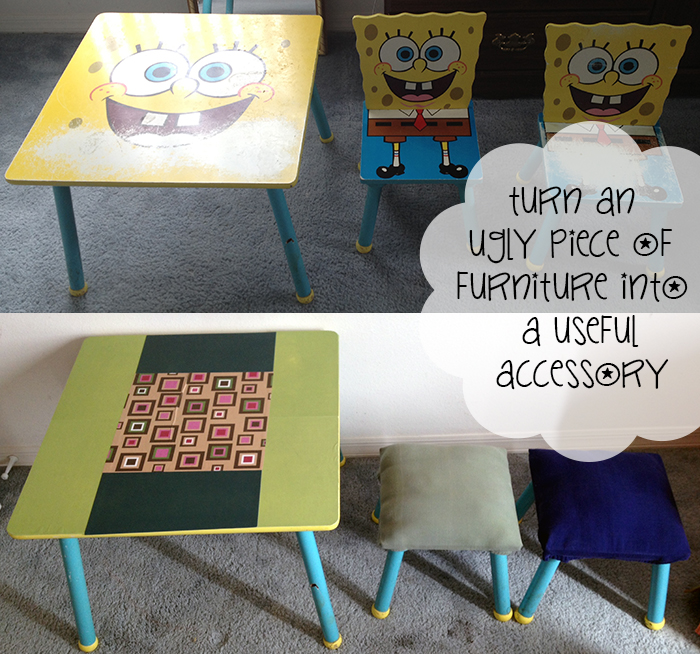 Those who know me know how much I LOATHE Spongebob. I don’t let my kids watch it, and I find it a really troubling fact that most parents think it’s fine. I guess I’m just old fashioned, but I see no need for the gross humor.

So when I found this Spongebob table and chairs in our local charity shop for $8, I was HUGELY divided on which side of me would win out – the frugal side who is all about making a dollar stretch OR the overprotective mom who worries that letting my kid play with it would make him inherently interested in the character portrayed on it. 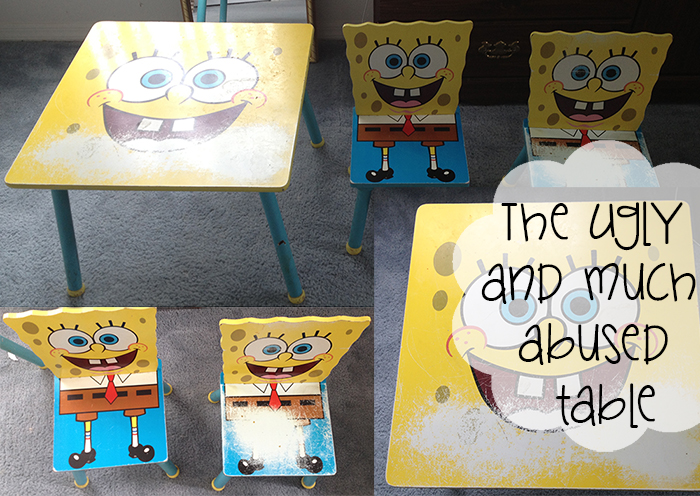 In the end, the frugal side won out, and I took it home with plans to make it over so that it wouldn’t fill me with dread every time I look at it. That was last November. Yikes.

So for about seven months, the kid has been playing with it and seeing those big eyes and gappy teeth every day, and when he started actually saying, “Pung Bog” out loud (his version of Sponge Bob), I realised I needed to GITTERDONE!

So I formulated a plan for the table top, which was basically as easy as it could possibly be: mod podge! To accomplish the task, I needed three sheets of 12 x 12 scrapbook paper, some mod podge, and a paint brush.

Of course, you have to figure out a pattern for the paper that works for you. I had wanted to have the outside border one solid color, but for the life of me, I couldn’t find two solid colored pieces! I was frustrated, but I improvised. I cut the two solid pieces in half and then used them as a border around the more exciting center square. I was lucky as this table was about 2 ft by 2 ft, so this all worked really well. 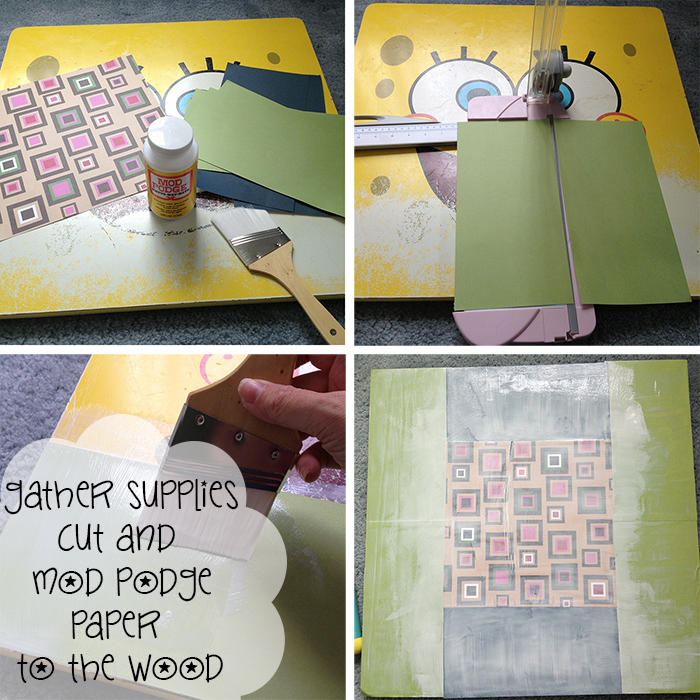 I worked with one piece of paper at a time, using the modpodge to glue the paper down to the table and then brushing more of it over the top of the paper. In this way, it makes the top durable, acting as a sealant for the paper. Once it is dry, I added another coat, making sure to run it over the sides of the table, as well so it is good and waterproof.

While that set, I turned my attention to the chairs. Originally, I intended to paint or mod podge them as well. But the table top actually took a lot longer than I anticipated, and Dexter kept coming in asking for his furniture back. So I had an inspiration.

In my box of craft junk, I found a couple of cloth napkins which I’d collected when we moved into this house. I found one in green and one in blue, and they matched the color scheme of the scrapbook paper quite well. I also had some polyfil stuffing on hand, so I figured – why not do padded stools?

I quickly removed the backs of the chairs and then tried to figure out how exactly one goes about connecting the material to the top… I don’t own a staple gun, nor do I have any furniture tack things (I don’t even know what they’re called, obviously!) so I improvised again.

Flipping the stools over, I set them on top of the napkins and then proceeded to use wood nails to affix the napkins to the bottom of the stool. Once I’d done three sides, I added my stuffing between the wood and the napkin and then stretched and nailed down the fourth side. 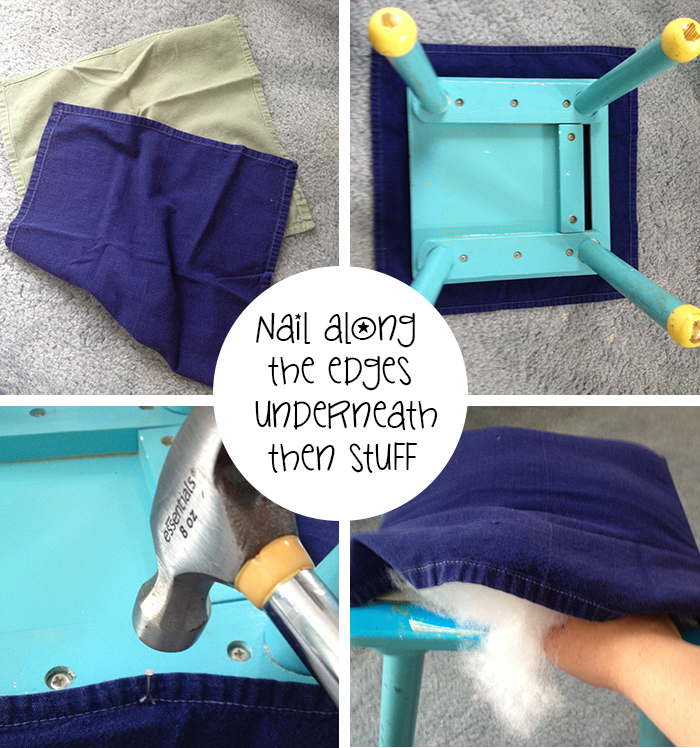 The first stool was difficult, especially the corners! But by the second one, I’d figured it out. It isn’t perfect (that’s an understatement!) but it worked!

In the end, I was left with a really cool little set. Dexter LOVES it, and when we gave it back to him, he was thrilled. Spongebob who?? It is now a cute little play table for his bedroom that eventually he’ll be able to share with his brother. And since I had everything on hand already, the entire project only cost us $8 and seven months of our lives.

Sure I could have (maybe should have?) painted the legs, but when time is short and your kid is whining about his lack of STUFF, you just want to give it back and have done with it. At least there are no obnoxious cartoon characters on show. Right? Right?

Anyway, hope you enjoy my little DIY walk through. I’m loving being able to craft again, even if it turns out not quite as good as expected.

Great inspiration! I watched sponge Bob as a kid and definitely won't be letting mine watch it. It's amazing I turned out this well haha. I love the padded stools! Quick thinking with the napkins!

Great inspiration! I watched sponge Bob as a kid and definitely won't be letting mine watch it. It's amazing I turned out this well haha. I love the padded stools! Quick thinking with the napkins!