This last week has been hard. Last Monday, we put the kids back into daycare. Dexter for two days a week and Dash full time. This all in an effort to make sure they both get social skills and interaction. Daniel, in particular, needs to be around other people. He’s had mama full time for nearly ten months, and the kid is ADDICTED to me. Not that I’m complaining, mind.

So when it comes to daycare, as we learned earlier this year, daycare is a breeding ground for germs, and it doesn’t take long at all for a kid to get sick.

So when Daniel started getting all sniffly and full of mucus, we were prepared. He’s had his flu vaccines already, and while it sucks that he’s miserable, it’s nothing we can’t handle. He has a check up later this week, so if he’s not better by then, we will get some help. The worst thing about it is that the blocked tear duct he had when he was born is back with a vengeance. His poor eyes are pink and puffy and constantly gummy. He’s got yellow “eye boogers” which are constant. Literally I can clean them with a warm wet rag and in seconds they are just as bad.

His nose is very crusty, as well, and it seems to be causing him pain. He fights like a wildcat if we try and wipe it. Poor boy. Luckily he is a VERY happy baby, and he has been in great spirits, despite his obvious discomfort. You can’t keep that kid from smiling.

But this week was hard for more than just Daniel’s cold. We have had some drama with Dexter, as well. I wrote last week about our visit to the audiologist, where the doctor told us that his ears are so blocked with wax that the tests are not accurate. She advised us to go to our pediatrician and ask him to thoroughly clean Dexter’s ears, making sure there isn’t a sign of wax. She wanted us to do it right away and then work with the doctor to develop a good regime where we can do it ourselves.

So on Thursday, I took Dexter to the pediatrician (an appointment that was already in the books) and asked our doctor to clean his ears. The doctor seemed put out to be asked. I told him what the audiologist had said, and I said that we could go to an Ear, Nose and Throat doctor if he thought it was necessary. He asked why I didn’t just do it myself, and I said that his associate had told me last time that it’s best if a doctor does it, as they are professionals and more careful.

Our doctor then asked if I shop at Publix (which is next door to his office). I said that we did. He said that if I wanted to ever shop at that Publix again, I shouldn’t have them clean his ears too often, as he will just associate that Publix with pain. He proceeded to tell me about taking his dog to a kennel and every time they went over a certain bridge on the way, the dog would start freaking out, as he knew where they were going.  I must have looked a little weird, as he then grabbed his tools and said he’d be right back.

Now I have to say that Dex had his ears cleaned about 6 weeks ago at this same office by the other doctor on staff. We were warned then that it is not a comfortable procedure, but it wouldn’t hurt him. At that time, Dex actually smiled through the whole thing. The doctor and the nurse holding him down were amazed. He was totally unfazed, and a TON of wax was removed. Once again, my kid was super hardcore.

So I didn’t expect this time to be any different. The doc had me hold Dexter’s arms down by his side, and he held up his tool. At the last second he looked at me and said, “Now I shouldn’t have to tell you that some red stuff is normal and doesn’t mean I’ve poked through his eardrum.” I got a little nervous, but nodded. Yes, of course. But that wouldn’t happen because last time everything was fine.

He set to work, and it was only SECONDS before Dexter began to scream. Tears poured from his eyes, and he begged for mercy. “STOP! Mommy! HELP! OWIE!”

Every part of me was in agony watching his little face. But I know he can get very upset very easily these days, and I assumed that he was just making a big deal out of a tiny bit of discomfort.  The doctor was pulling a LOT of red lumpy wax out, and there was an obvious amount of blood. I swallowed hard. Okay, maybe it was more painful than I thought ,but still… the doctor had warned me. Sometimes we have to suffer a little pain for the greater good. I soothed my baby and gave him all the comforting words I could think of.

Then it was time to change positions to do the other ear. But as soon as I set him down, he was frantic. He begged me to stop the doctor, and though I was extremely sympathetic, I still thought I was doing the best thing. The doctor dug into the other ear, and while Dexter again screamed in agony, no blood appeared this time.

Finally it was over, and I grabbed him up and held him to me. He clung on to me, sobbing. I felt like the worst mother, but again, I thought it was going to be okay. The doctor told me that the first ear might bleed a little for a couple of hours but would then stop.

God, I can’t even write this without crying.

Over the next 24 hours, I sopped up so much blood from that ear. It didn’t stop. I vowed that if it was still bleeding in the morning, I would take him to Urgent Care. But the next morning, the blood in his ear was mostly just dried and it looked much better. Though he complained of pain, I still took him to daycare, warning them that he’d had his ears cleaned and that there was dried blood.

Hours later, when I picked him up, we realized there was a big problem. That first ear still had some blood coming out, but more worryingly, the OTHER ear was leaking great globs of green pus mixed with blood. I was frantic.

We took him immediately to the Urgent Care center. The doctor there diagnosed him with TWO perforated eardrums!  I was LIVID, as you can imagine. I’ve never been in this situation before. The urgent care doc said that they don’t even clean ADULT’s ears with those tools, preferring to flush them with water. He was amazed the pediatrician had done it.

I am completely floored. A weekend full of antibiotics has helped, and this morning the pus is gone. He’s got a 10 day course, though, to be sure they heal properly.

If you ever wondered what a perforated eardrum looks like, here you go. If you haven’t got a strong stomach, look away now! 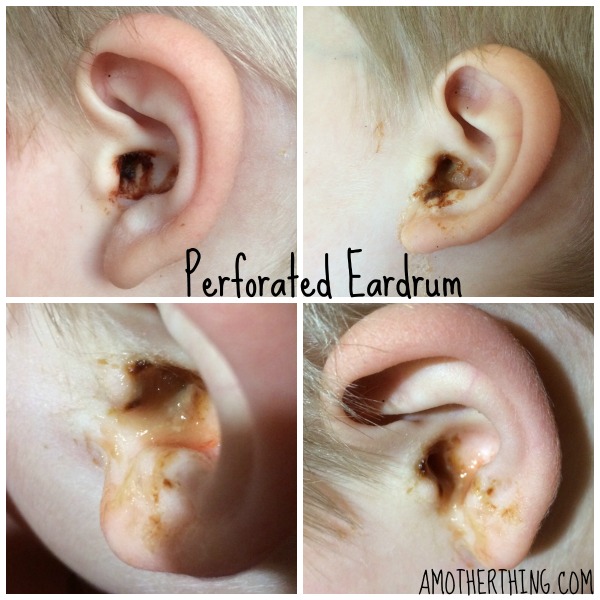 I am so angry at the doctor, as I think he was rushing and didn’t want to be doing it, and this awful thing happened. But more than that, I am angry at myself for letting down my son. I should have taken his cries seriously and stopped the procedure at his first scream. I blindly trusted the doctor because he is a professional, but I didn’t trust in my son that he needed my intervention.

I will never make that mistake again.

Many people have urged me to sue the doctor and to report him to the AMA. I intend to go in there this afternoon and make a formal complaint, but I am still thinking things through. I am angry on behalf of my child, but I am also a pragmatist, and I know that even if the doctor had taken his time and been very willing, an accident could have happened.

I wonder what you would do if you were in my position?

PrevPreviousIce Cream, You Scream
NextA Letter to My Accidentally Famous SonNext
On Key