When I was a kid, we used to save our popsicle sticks and use them to build towers, forts and even birdcages. Nowadays, though, you don’t have to eat eleventy-million popsicles. You can just buy craft sticks! And since there are literally thousands of activities to do with them, they are a GREAT way of keeping kids occupied.

One of my favorite things to do with them, which also happens to be my kids’ favorite thing, is to make Exploding Rainbows. We use jumbo colored craft sticks to create a chain reaction that gets them super excited. Today I want to show you how we do it. 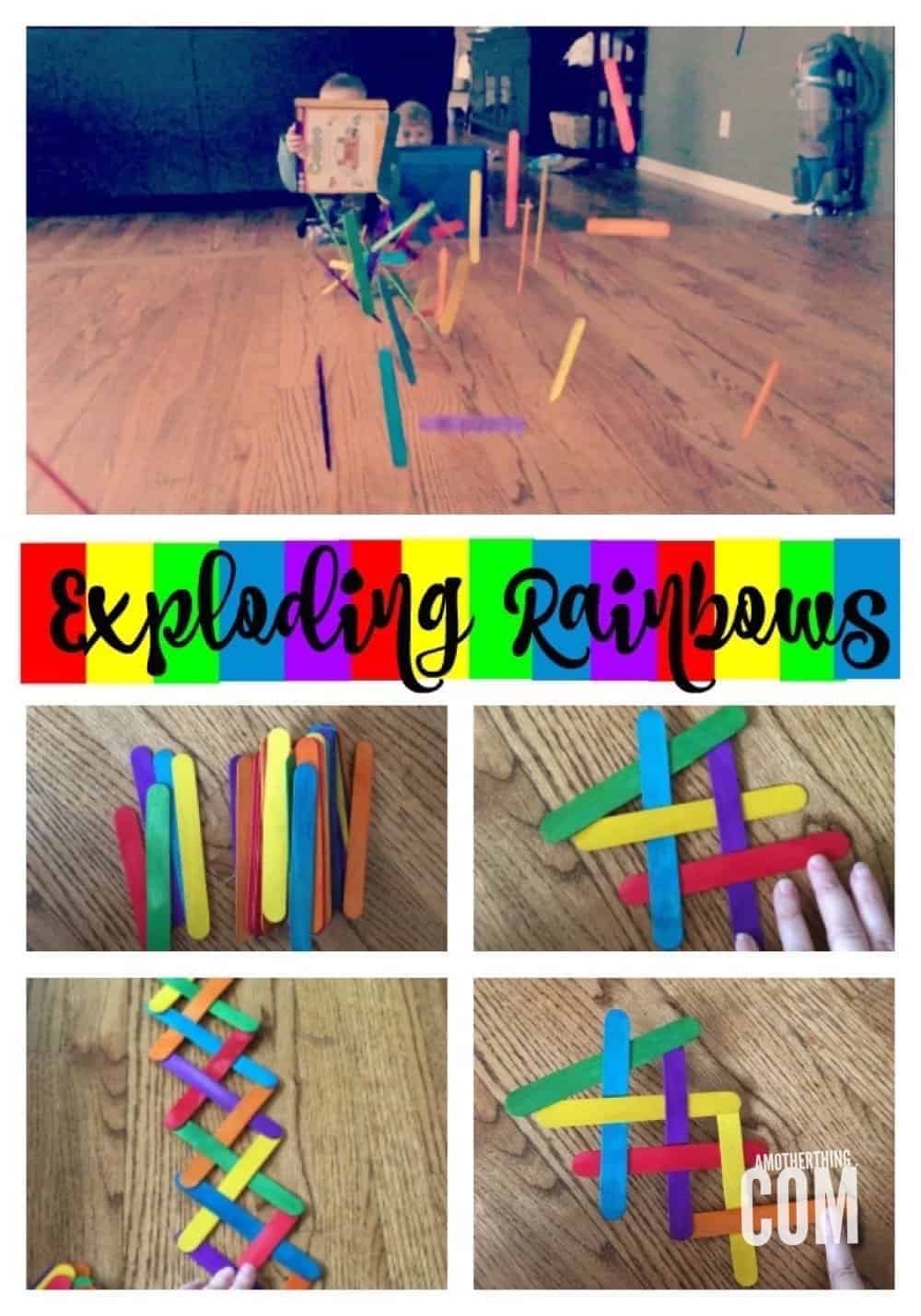 Building your chain can be slightly difficult for little kids, so until they are dexterous enough to do it, you’ll want to be sure to help them out. My kids are 1, 3 and 5, and they aren’t really able to get the hang of it, yet. But it is seriously so much fun that they don’t mind waiting for me to do it. With a little guidance, you can let them help with the occasional stick.

We begin with about 50 colored sticks. You can use more or less depending on how long you want your chain to be. But 50 makes about 8 feet of chain and is impressive enough for the kids. 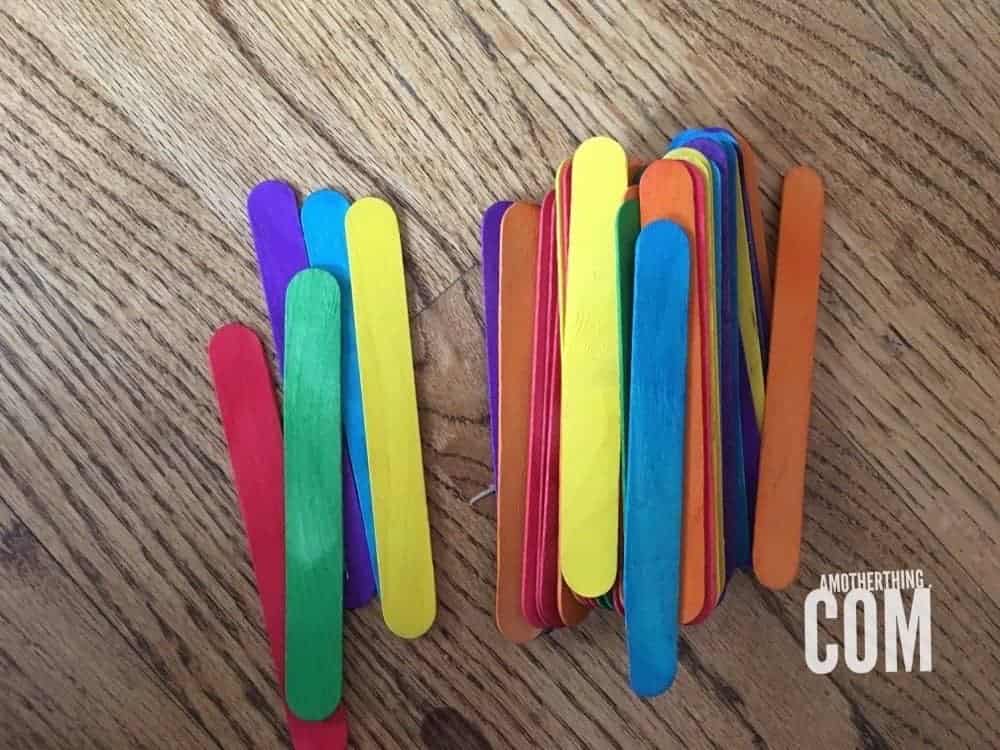 To begin, you need to set your first four sticks as so: 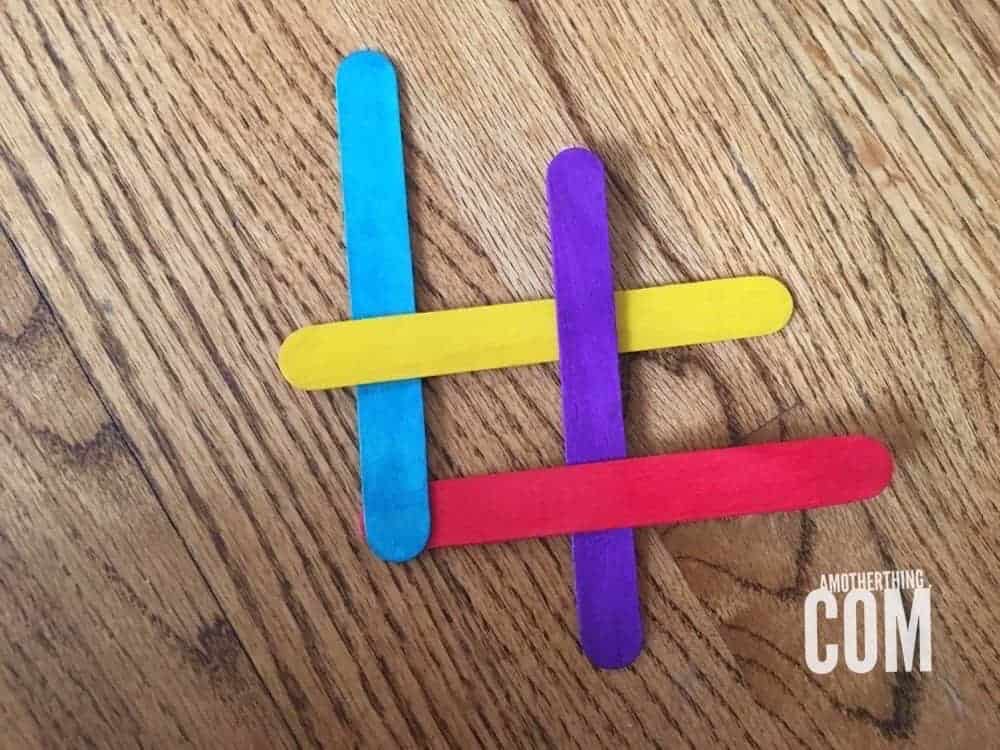 If you’ve ever braided hair, you should be able to get the hang of this, as it’s very similar. It’s a basic weaving pattern. Once you get started, it is important to hold down each craft stick as you add it to the chain. But since there are two ends, you’ll need to set an “anchor” piece at the top to hold one end safely. A diagonally placed stick will do the trick, though it is slightly fiddly. In fact, it’s probably the hardest part of the whole thing. It should look like this: 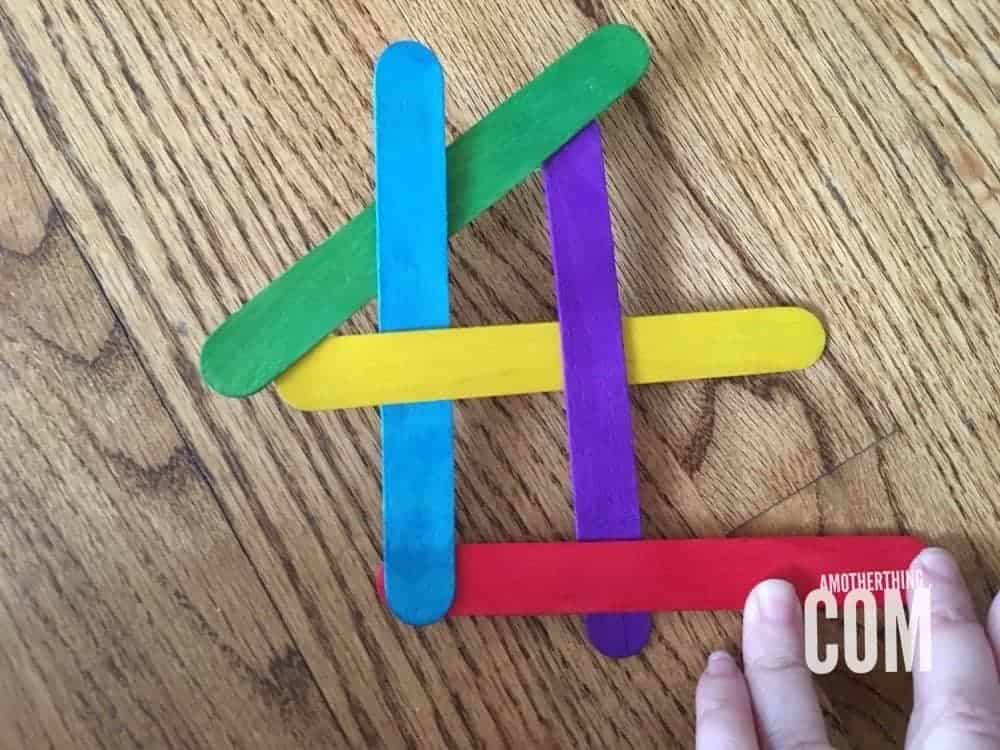 Now, it’s simply about adding new sticks! In an over/under pattern, you will make your way down. 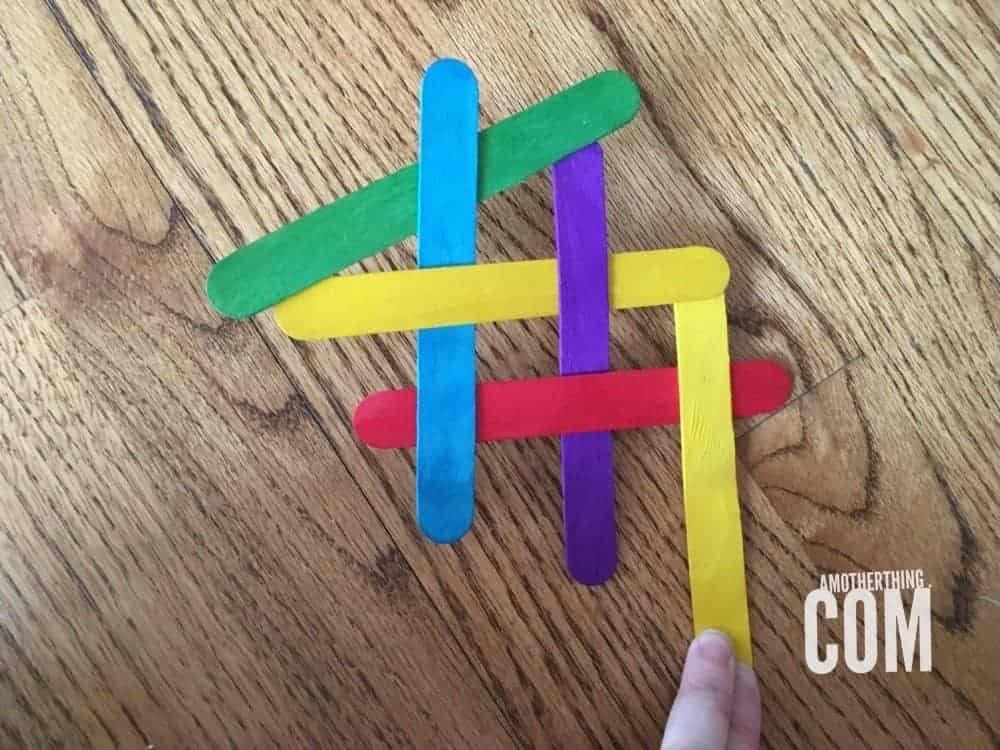 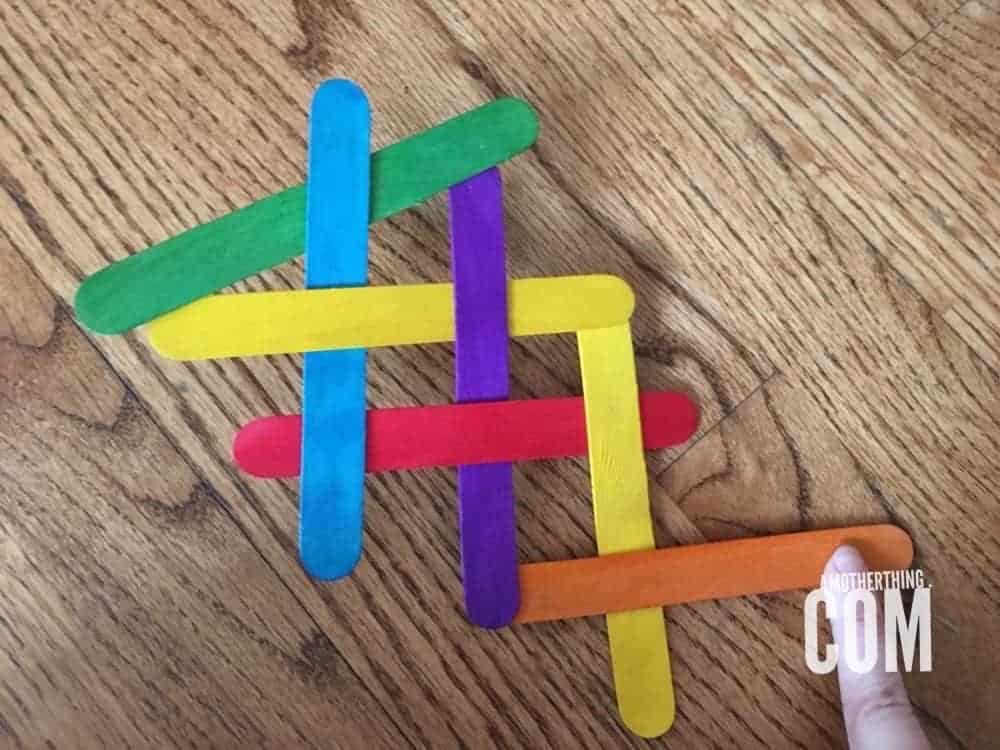 Each single craft stick will have three other sticks perpendicular to it. One at the top, one in the middle and one on the bottom. But you’ll only be adding each new stick to the end of the other. I promise that it sounds more confusing than it is. Once you get the hang of it, it goes very quickly. Just be sure to keep a finger on it or it’ll explode before you’re ready! 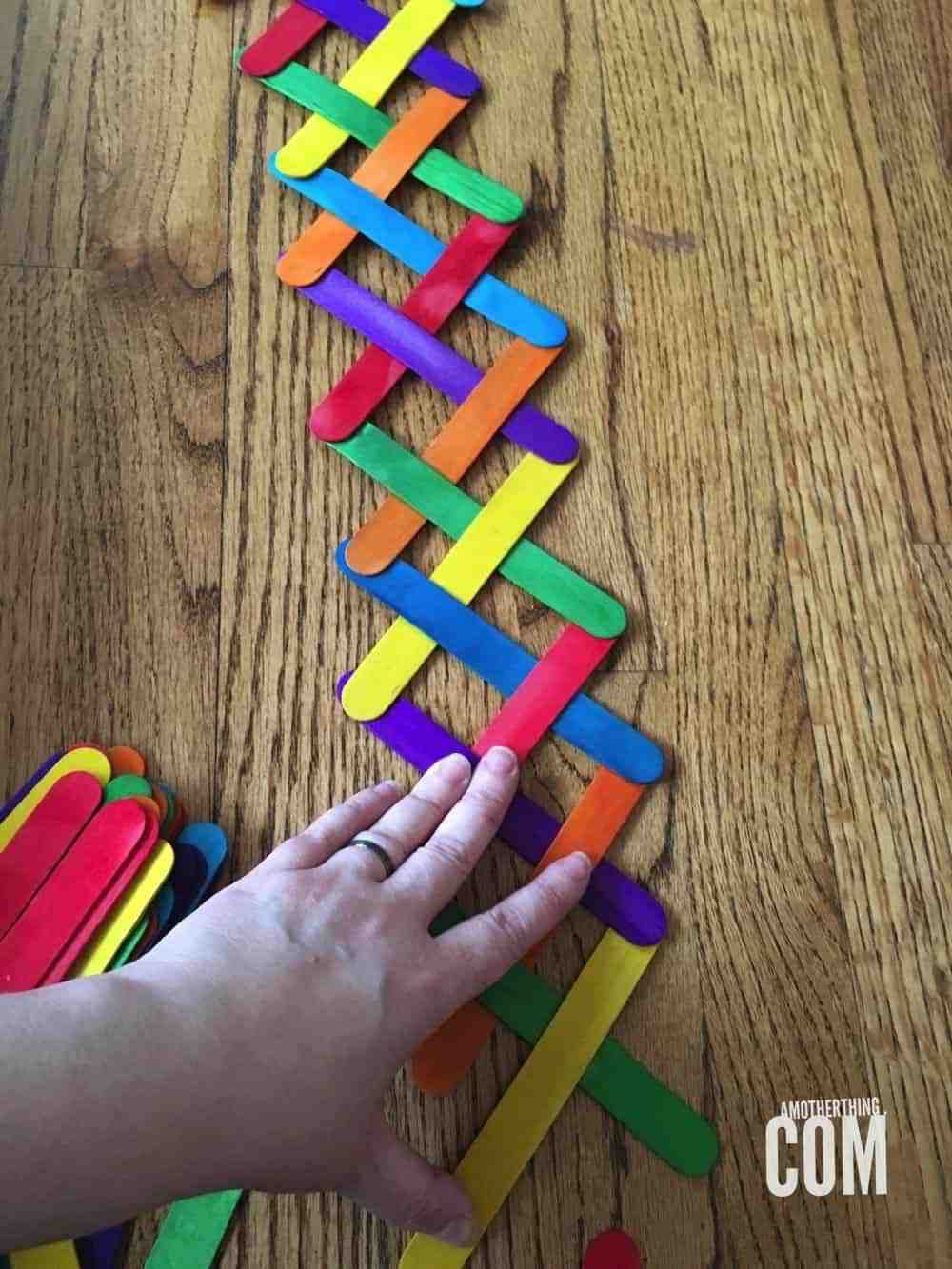 Eventually you’ll have a nice long chain ready to go. That’s when you gather the kids around and finally let go of your end. The sticks will each release the pressure and go flying into the air one after another. It’s amazing. 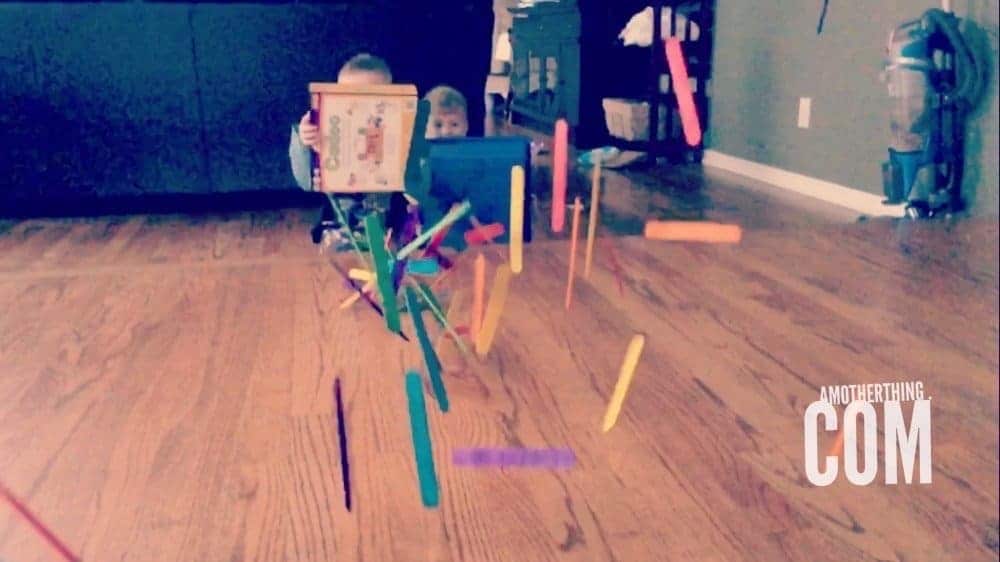 All in all, it’s one of the most fun things you can do with your littles. And it’s so much fun to see colors exploding everywhere! You won’t mind rebuilding it again and again. 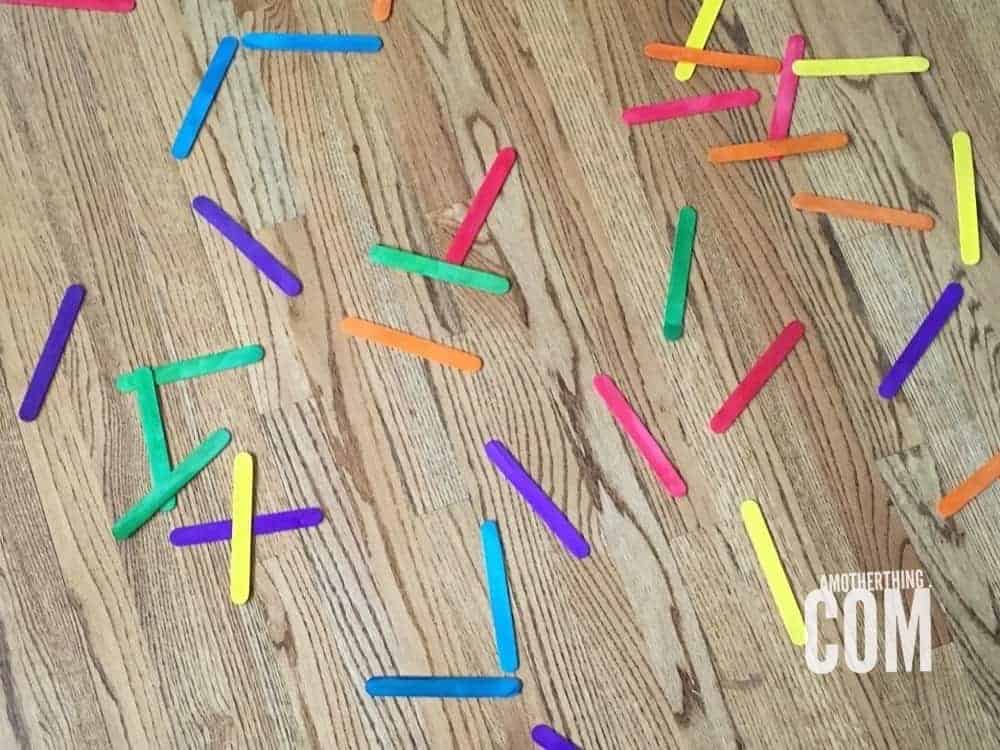 Popsicle Stick Crafts: 35 Fun Things for Kids to Make & Do - How Wee Learn

[…] Exploding Rainbows by It’s a Mother Thing. This cool STEM activity uses just large popsicle sticks to create a fun chain reaction that is very exciting! It will teach your kids some patience to set up but once it’s finished it is sure to get a big reaction! […]