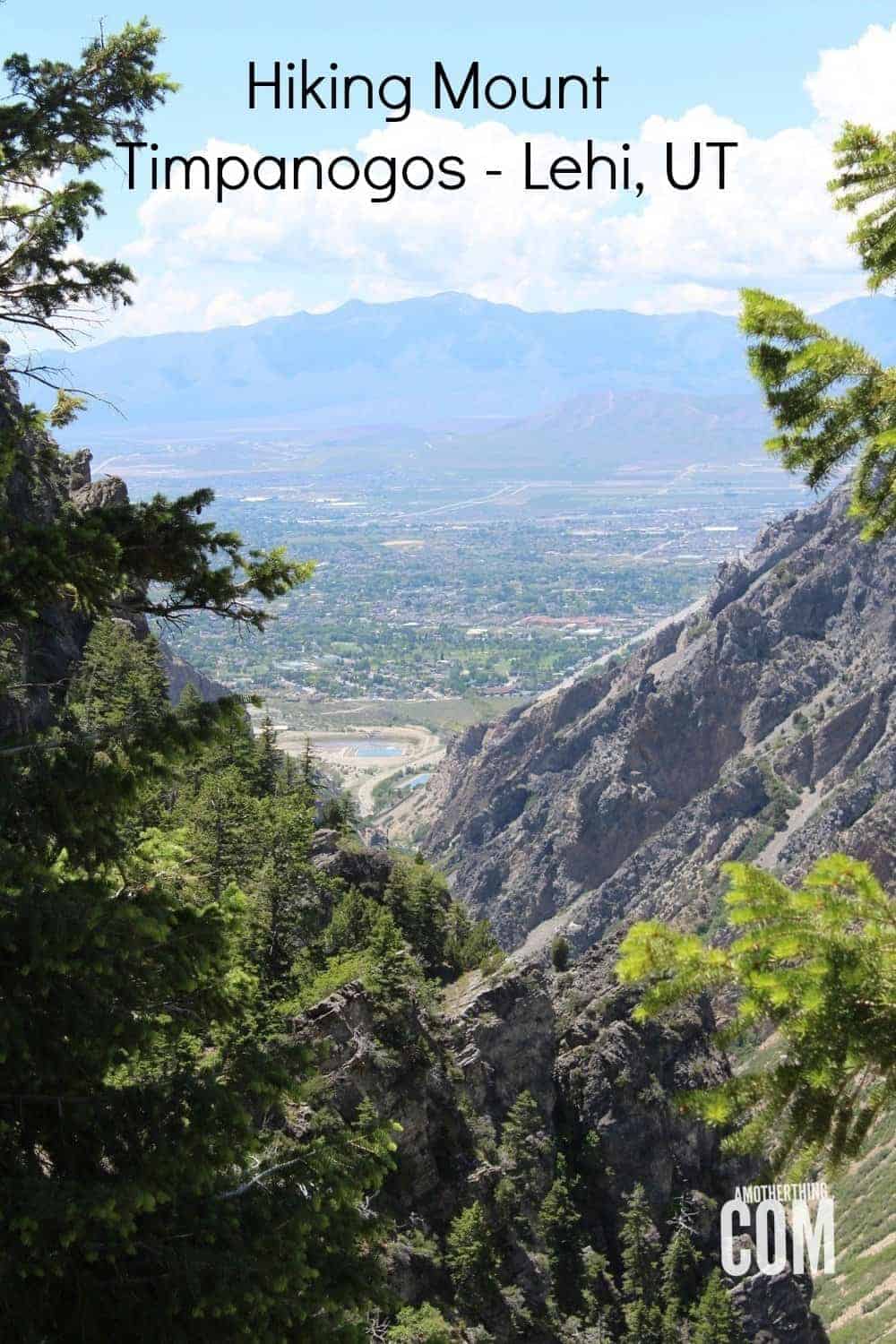 One of our favorite things to do as a family is go hiking. While I may be an overweight lazy person, I truly enjoy getting out in nature with my family. Utah has some AMAZING vistas if you are willing to put in the work to get to them, and one of my absolute favorites is the moderate hike up Mount Timpanogos. Once you reach the top, which involves hiking about a mile and a half up dozens of switchbacks, you come up to Timpanogos Cave, which is an amazing thing to see and explore. Guided tours lead you through these gorgeous formations, and then you can hike back down the mountain.

Mount Timpanogos is the second highest mountain in Utah’s Wasatch Range. Timpanogos rises to an elevation of 11,752 ft (3,582 m) above sea level in the Uinta-Wasatch-Cache National Forest. The exposed portion of the mountain is made up entirely of limestone and dolomite from the Pennsylvanian period, and it is about 300 million years old!

The word Timpanogos comes from the Timpanogots tribe who lived in the surrounding valleys from AD 1400. The name translates as “rock” (tumpi-), and “water mouth” or “canyon” (panogos). 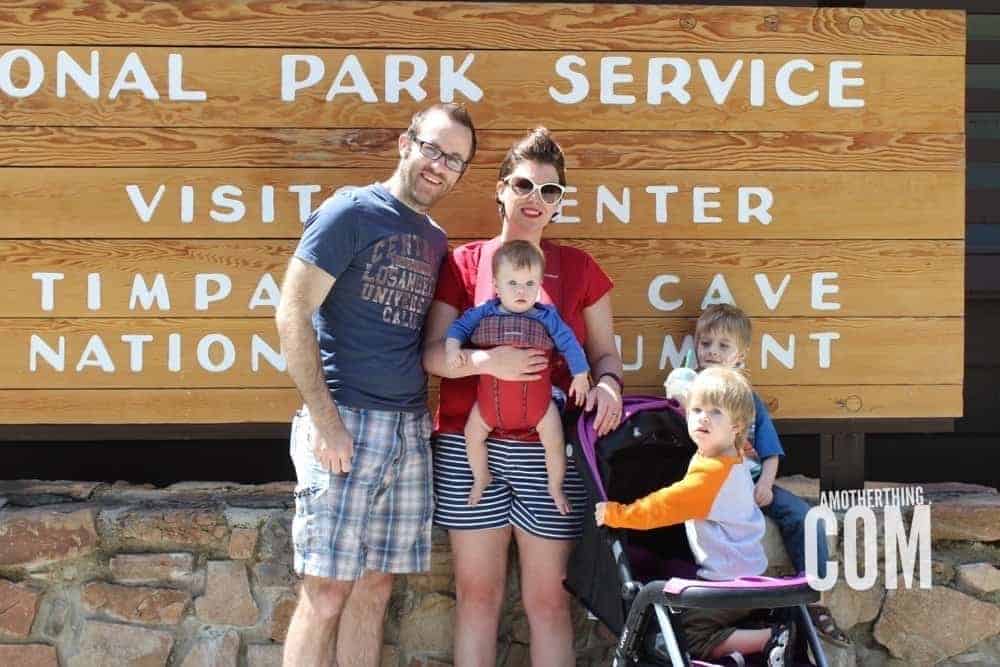 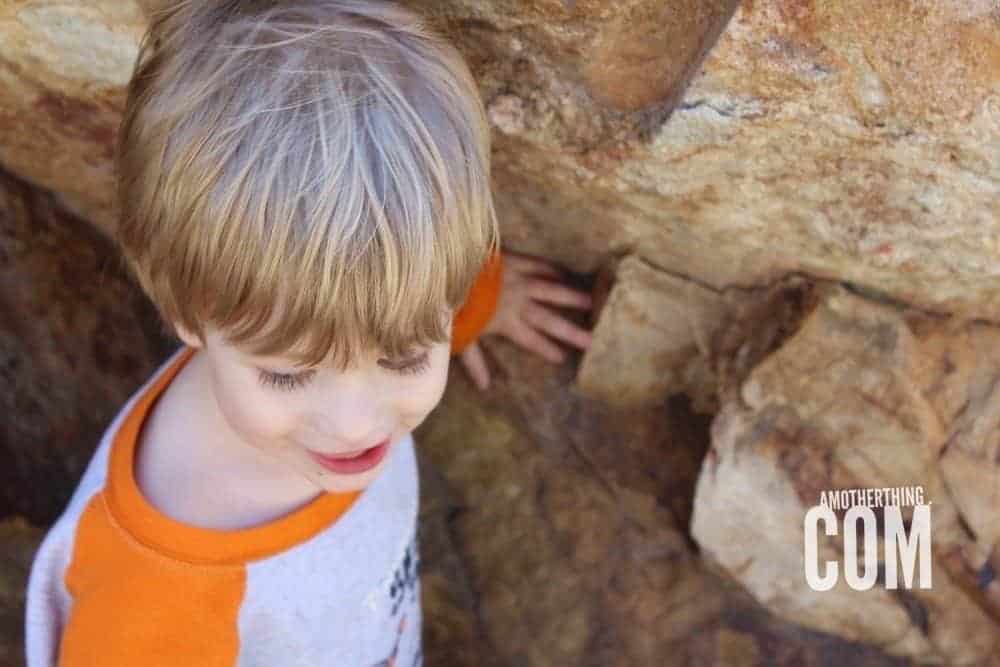 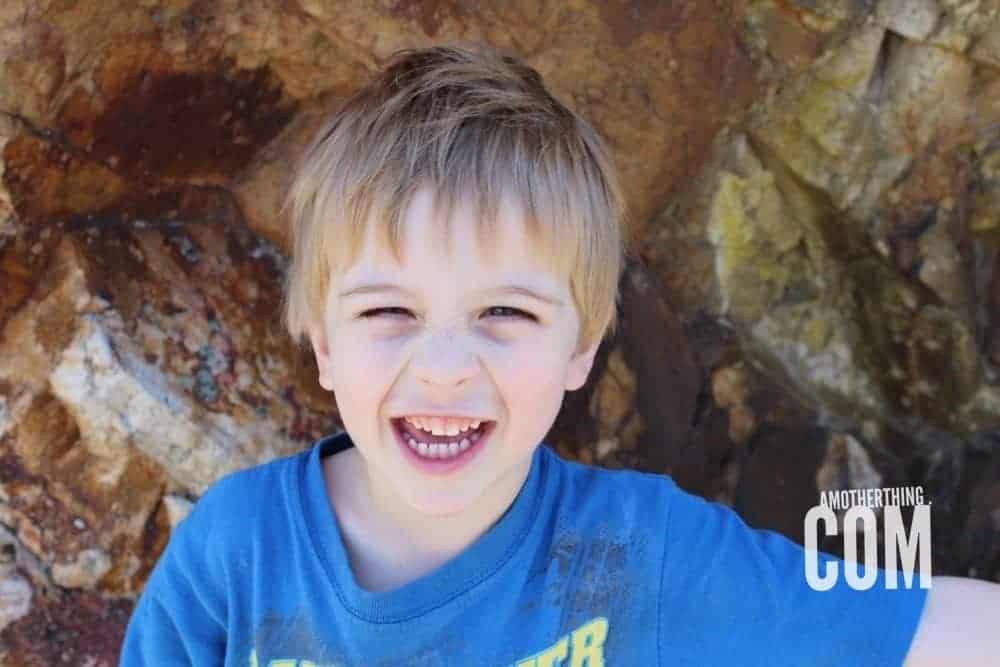 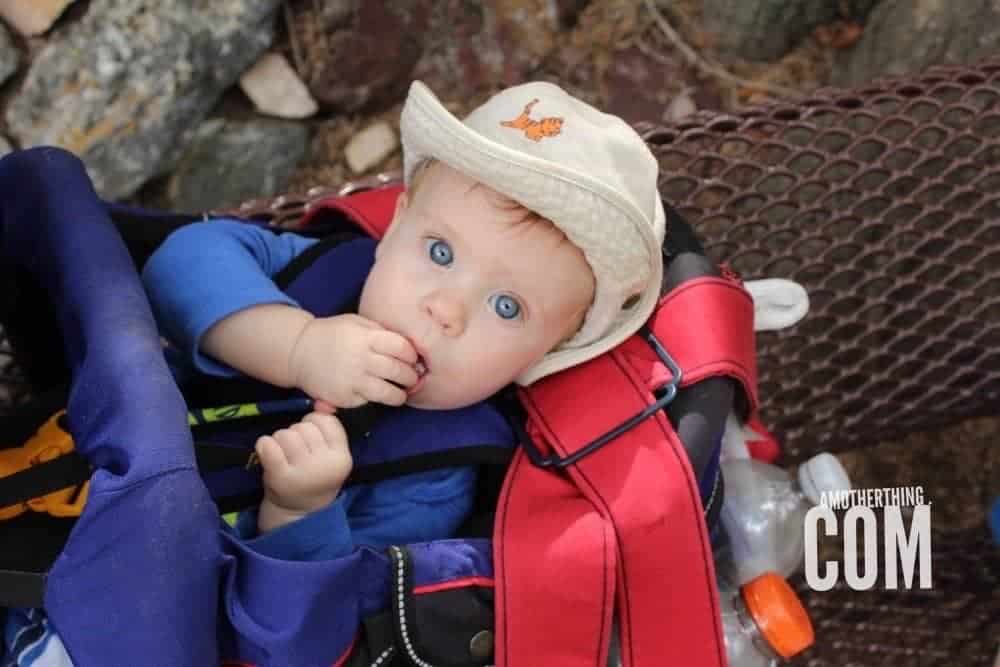 As mentioned, this particular hike is not “easy.” But it is totally doable with kids as long as you take it slowly. Dex is 4 and Dan is 2, so they were able to walk it by themselves, as long as we took many breaks. Baby Chester, at 8 months old was carried by either Mark or me, and we traded off every so often as the heat made it difficult.

There are tons of switchbacks as you make your way up the mountain, and there are some spots (usually the bits where you REALLY need a break) where you are not allowed to stop, as it can be dangerous. So be sure to break frequently so that you have the energy to make it through the harder parts. 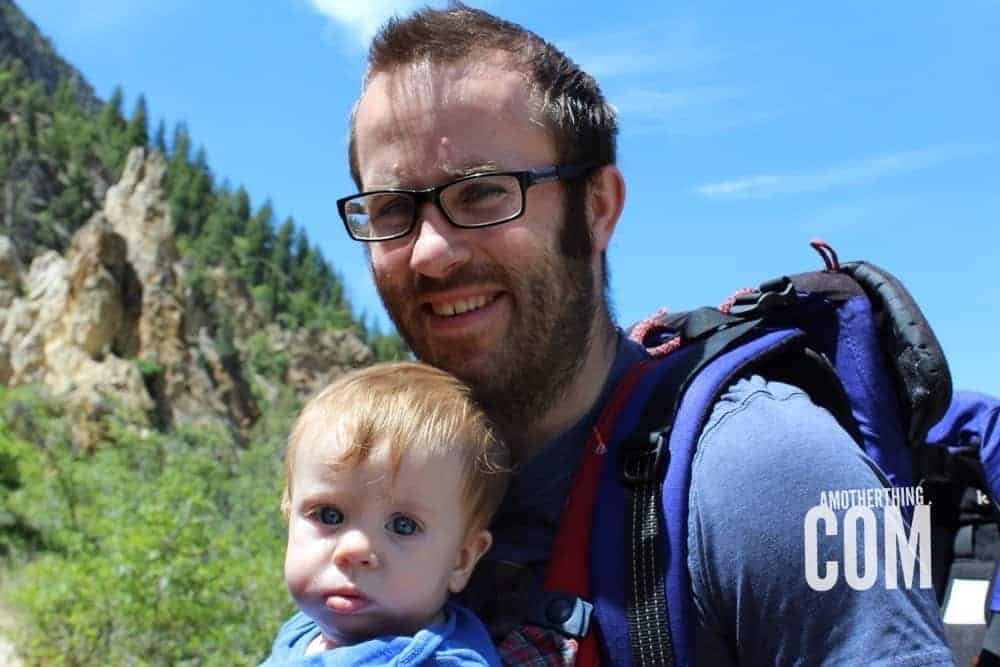 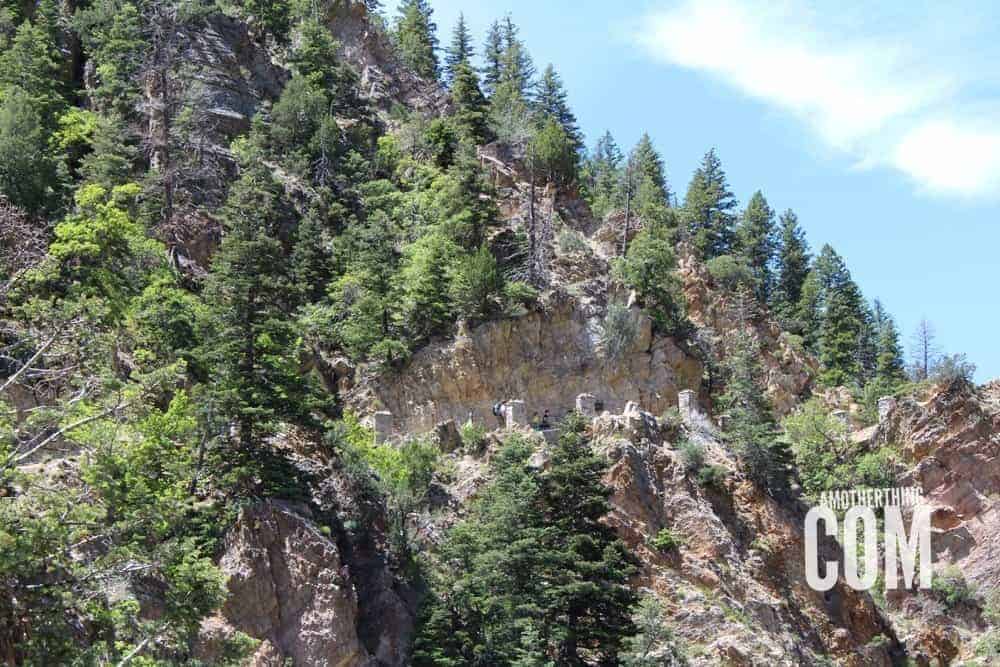 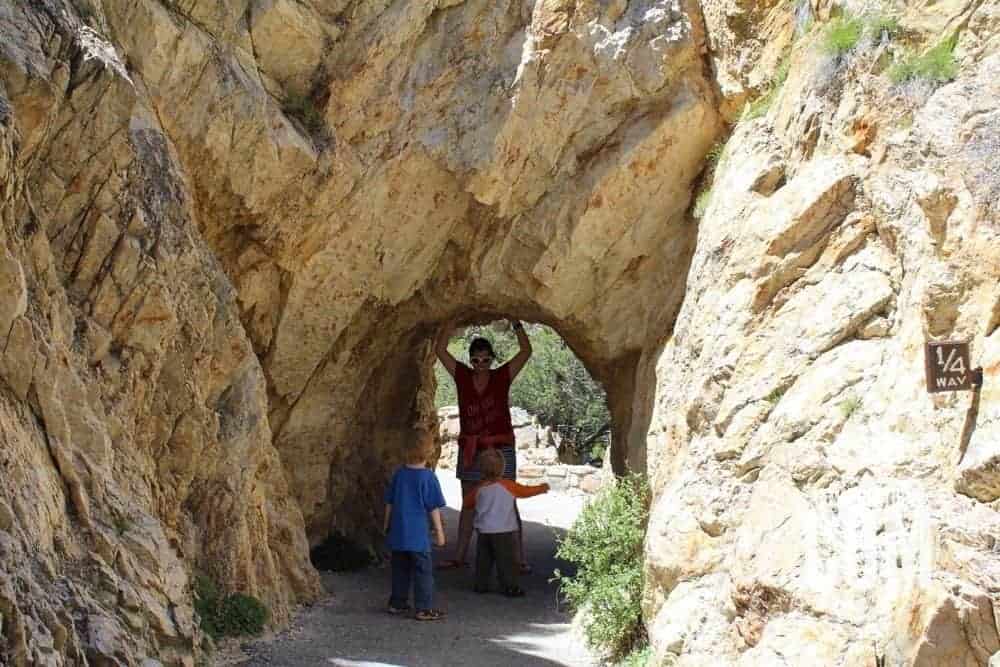 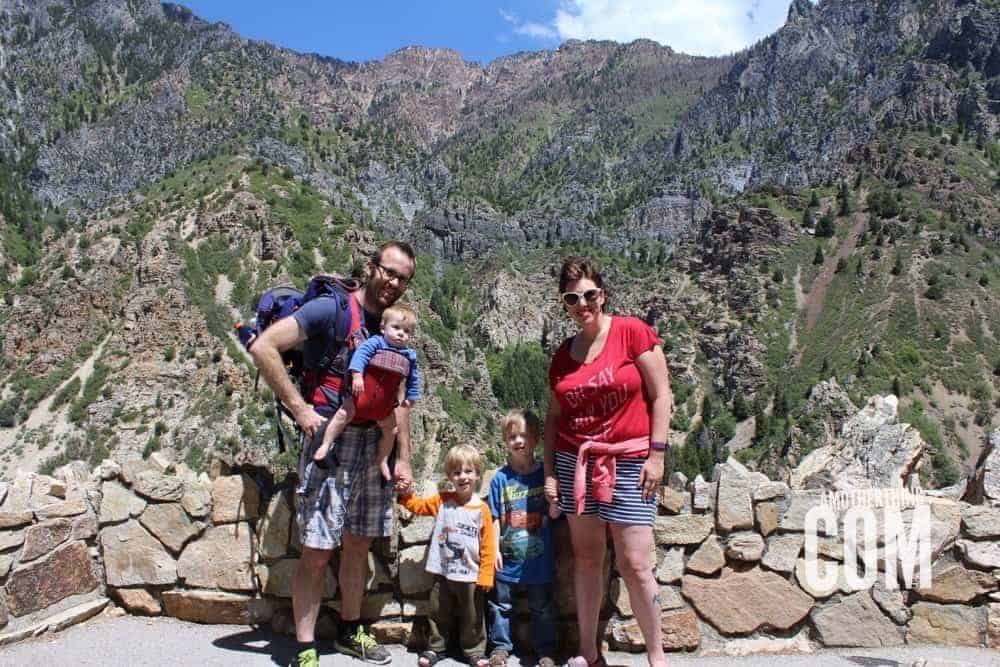 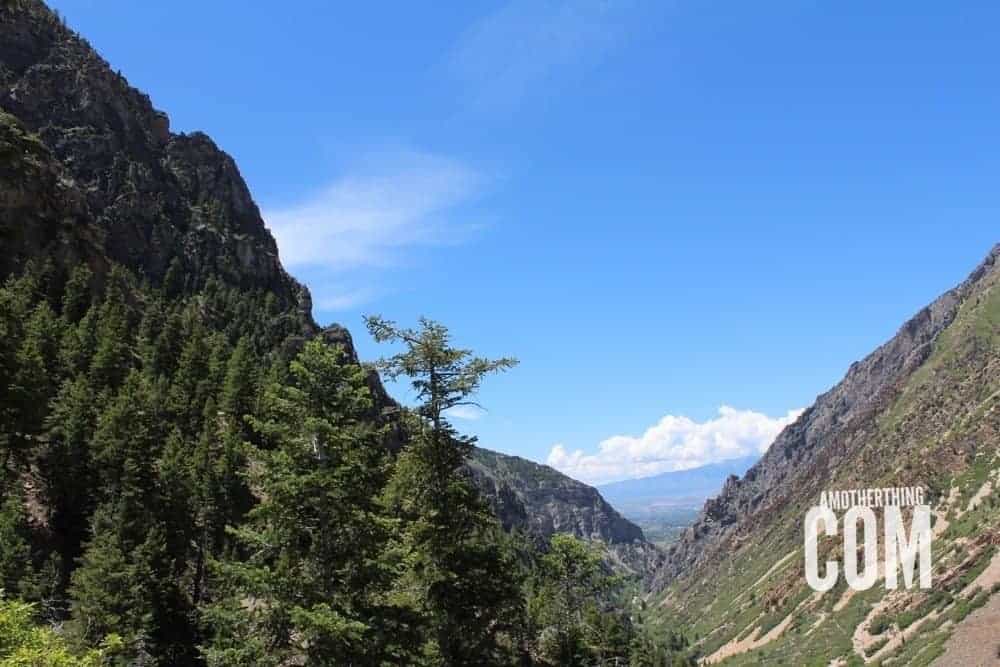 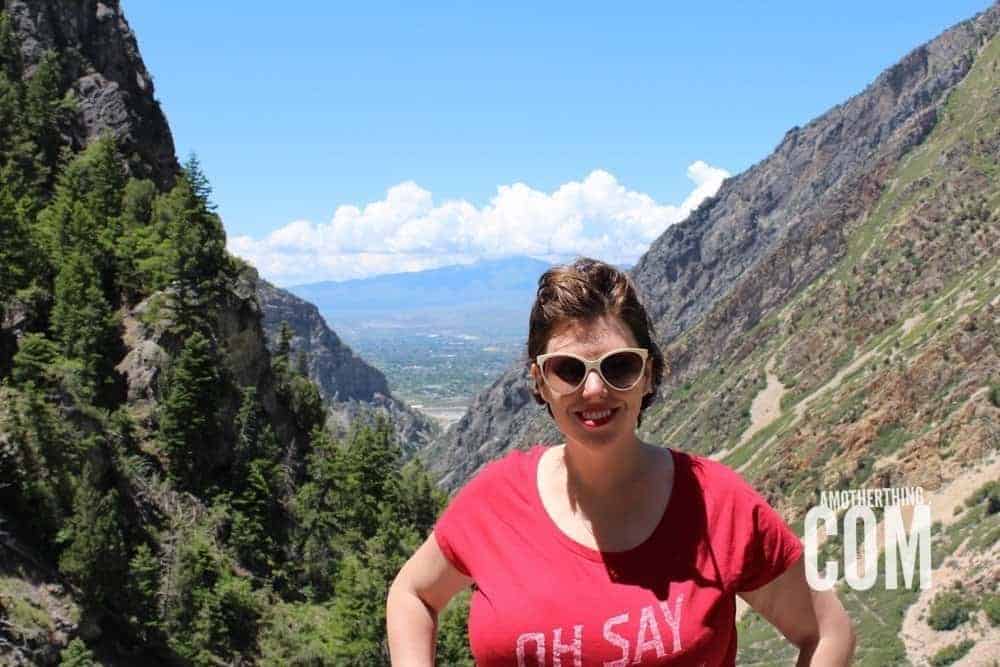 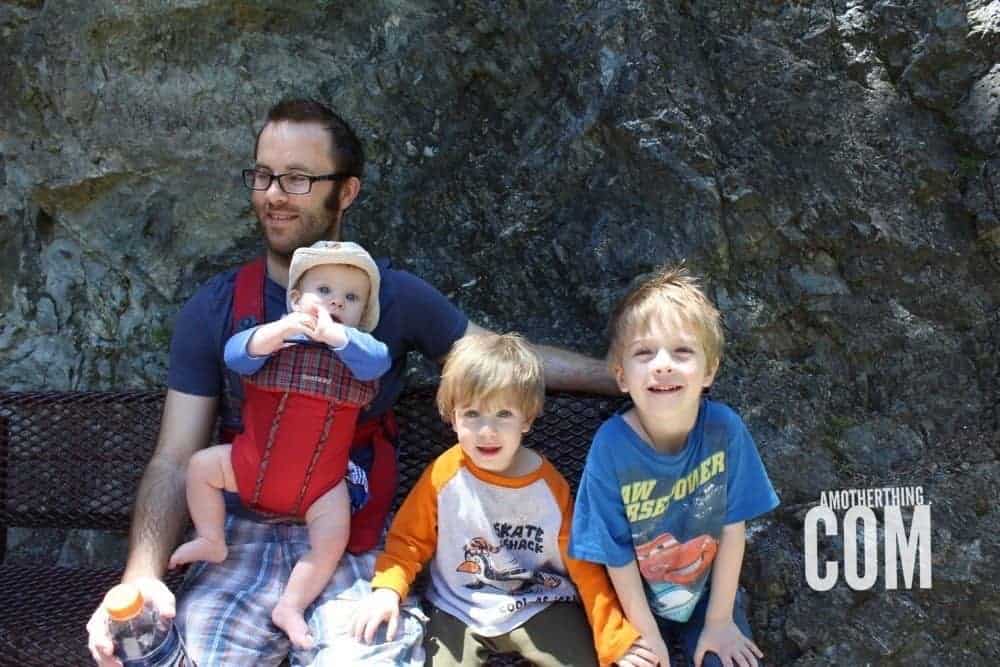 Remember to bring plenty of water to keep hydrated. You’re exposed to the elements at all times – including the hot sun and strong winds, so snacks and fluids need replenished often. We were all sweaty before we’d even made it 1/4 of the way up the mountain.

There are so many beautiful views that make great photos. Stop and take some as you go! Don’t forget your camera!

Remember, too, that there are real animals living in this wilderness. Rattlesnakes are out and about, and while there are signs to warn you of this in certain places, be aware that they can show up ANYWHERE.

Once you make it to the top (it took us about two hours with our three kids), there are a couple of toilets that you can use if you need them. Bear in mind they are outhouses and so they are not lighted nor do they smell very nice. If you’re unlucky they may even be unusable as sometimes people aren’t that respectful and leave a big mess. Thankfully, when we went they were gross but not unusable.

Before the cave, you will also find a big locker to leave your gear. You can’t take bags or equipment into the caves, so you place them in the locker beforehand and pick it up when you leave. This locker is not locked nor guarded, so it IS a risk. Don’t leave valuables. 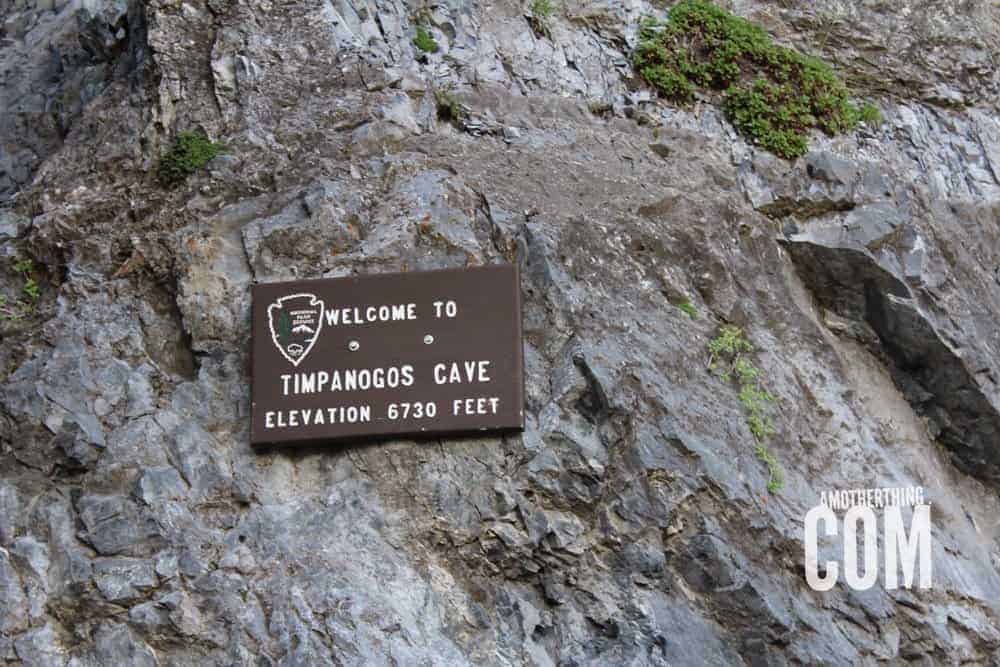 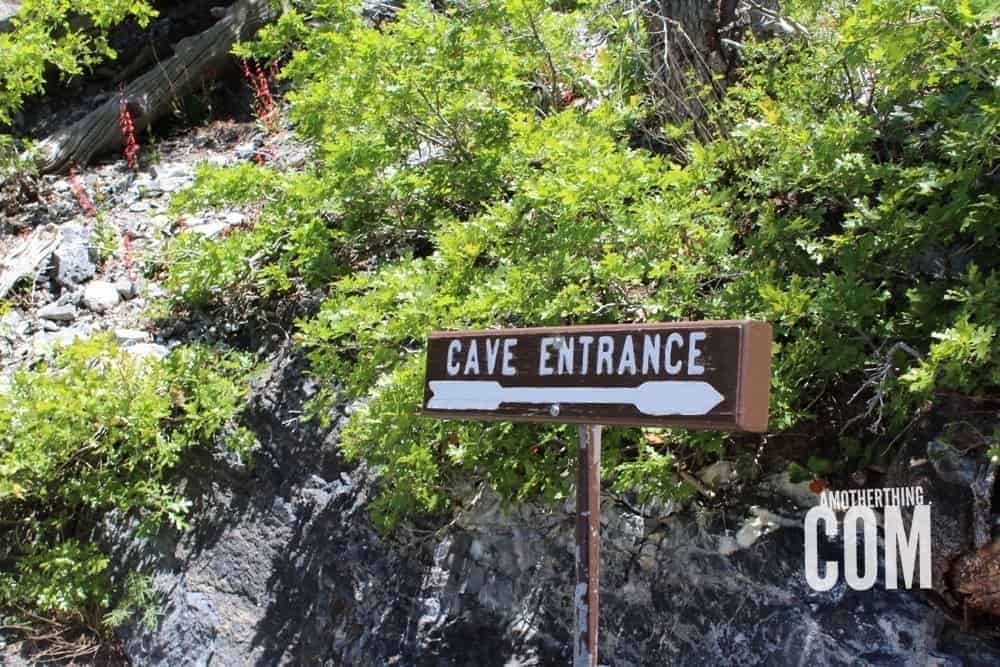 The cave itself is amazing. The three caves of the system, one of which is specifically called Timpanogos Cave, are only viewable on guided tours when the monument is open, usually from May through September. There is the standard tour going through the cave system and an Introduction to Caving tour which teaches Leave No Trace and goes further into Hansen Cave.

The three caves of the Monument that are tourable are: Hansen Cave, Middle Cave, and Timpanogos Cave. The three caves are connected by manmade tunnels blasted in the 1930s. It is VERY cold inside the caves, so make sure you bring a warm hoodie – especially for young children. I actually bought one from the gift shop before we hiked so that I could keep me and Chester warm enough.

Many colorful cave features can be seen. Among the most interesting are the helictites, which are like hollowed, twisted, spiraling straws of rock. They are thought to be formed when water travels through the tube and then evaporates, leaving a small mineral deposit at the end, but there is no scientific consensus yet. Other speleothems found in the cave include: cave bacon (which is a nickname that becomes VERY obvious when you see it), cave columns, flowstone, cave popcorn (again an obvious nickname), cave drapery, stalactites and stalagmites. 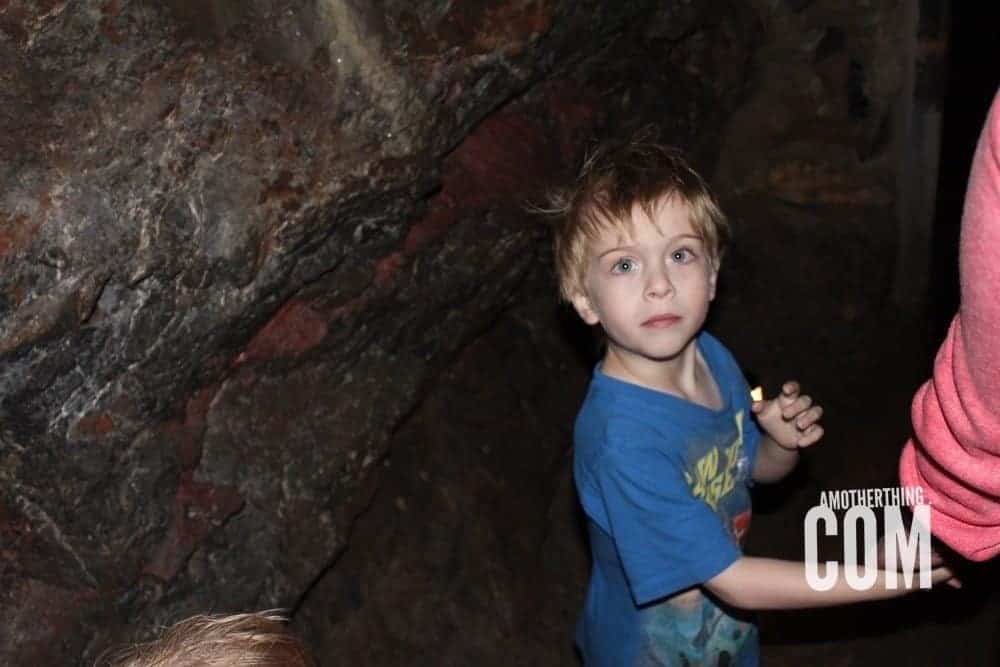 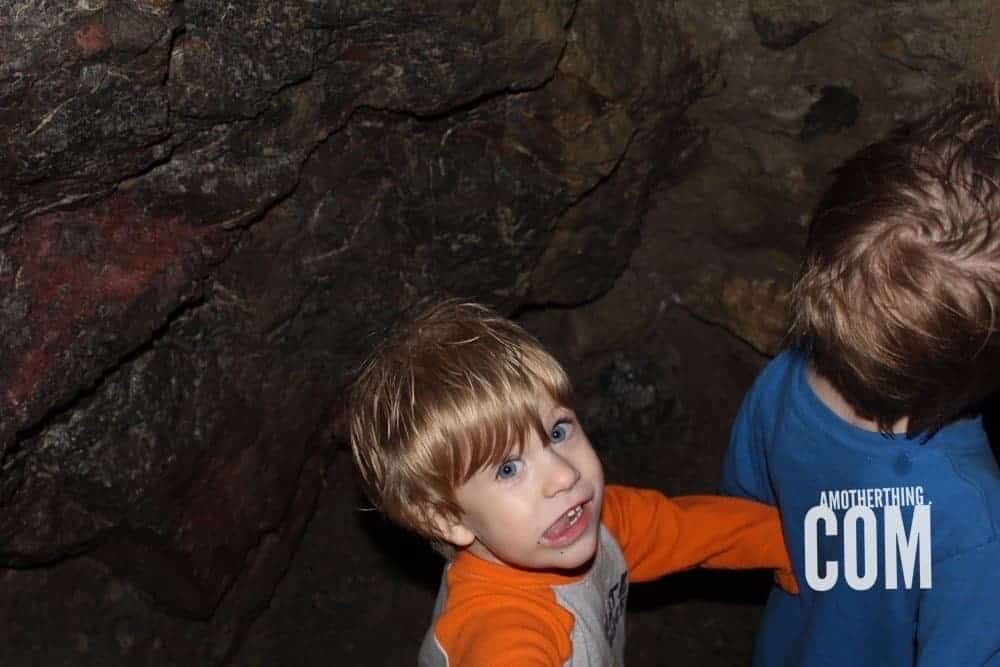 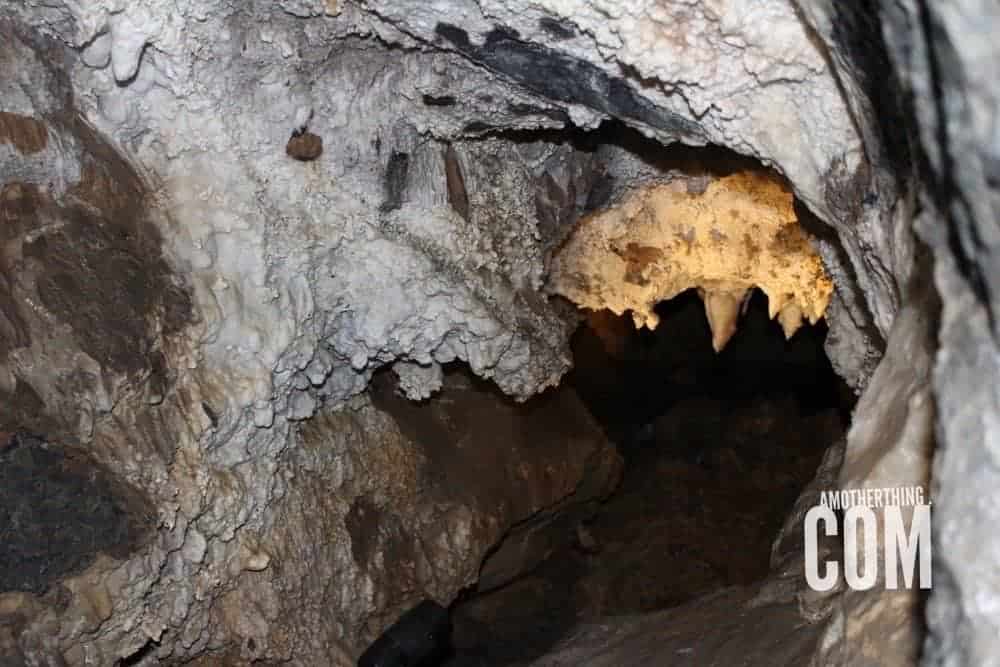 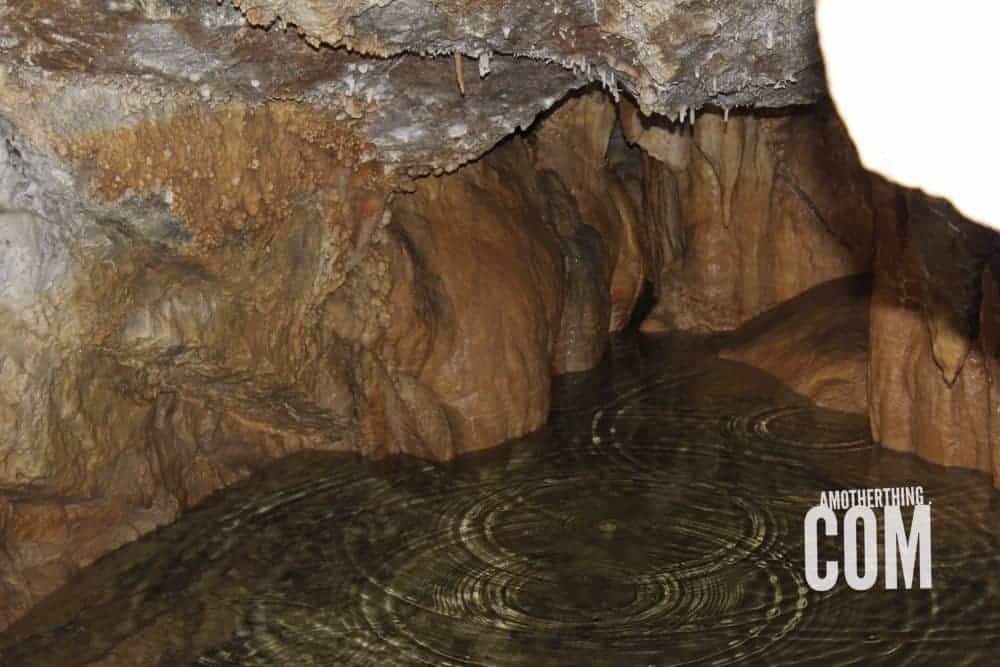 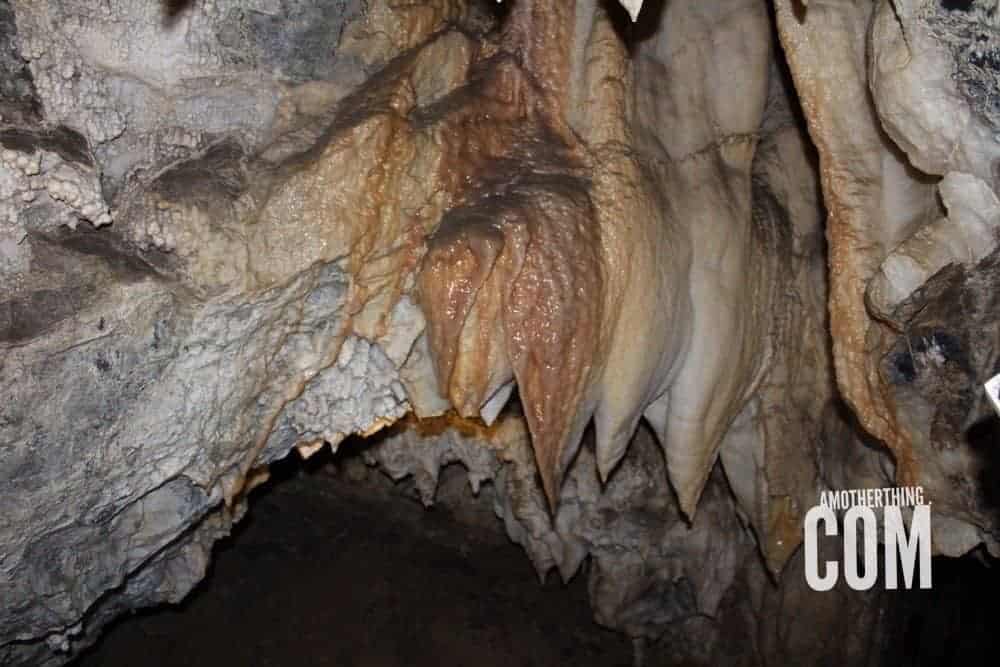 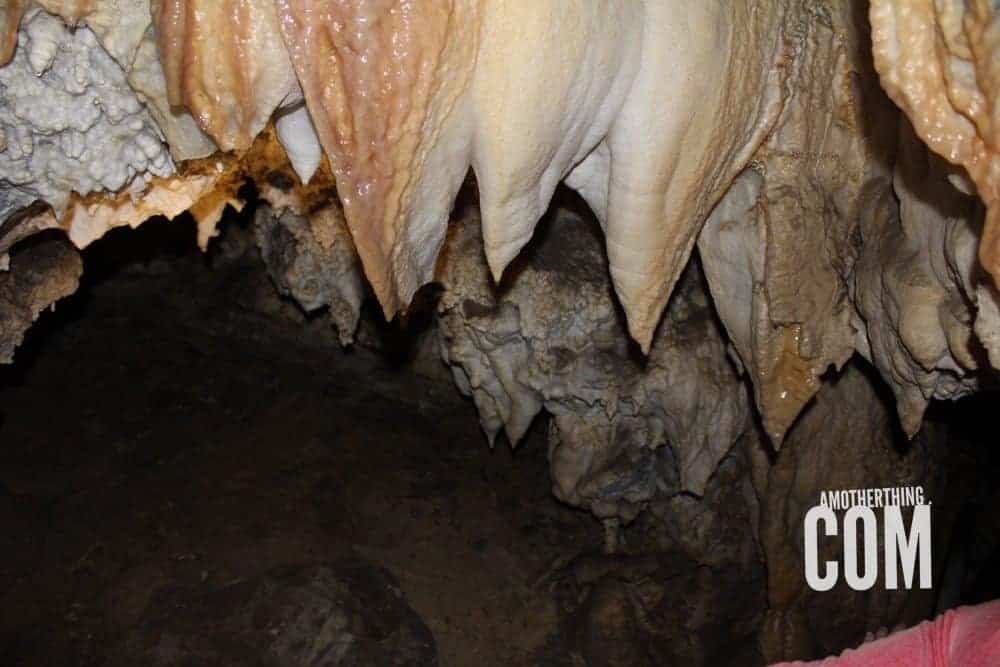 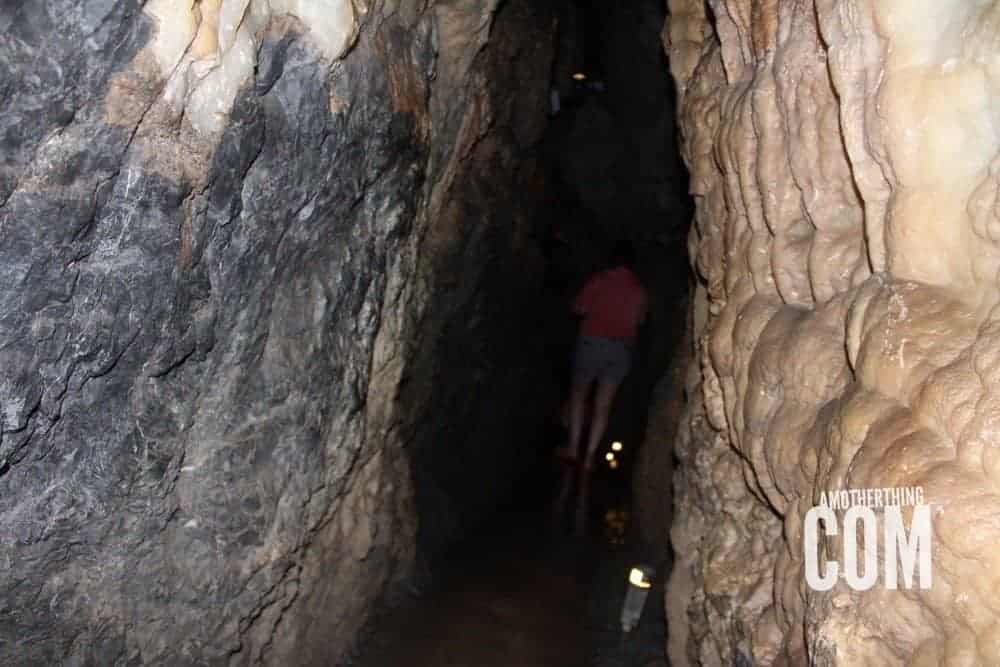 Our tour guide was seriously awesome, giving out treats when anyone hazarded a correct guess about anything she was explaining. Hearing the stories about how each cave was discovered was so interesting, and seeing the actual formations and understanding just how old they really are was incredible.

We even got to see the Great Heart of Timpanogos, an important part of the Legend of Timpanogos. The Great Heart represents the hearts of Utahna and Red Eagle joined together forever. The formation itself occurred when multiple stalactites grew together to form one big stalactite. It is 5 feet 6 inches in length and weighs ~2 tons or 4,000 pounds. It is made up of the mineral calcite, which allows for a translucent quality to the formation when light is shined upon it. 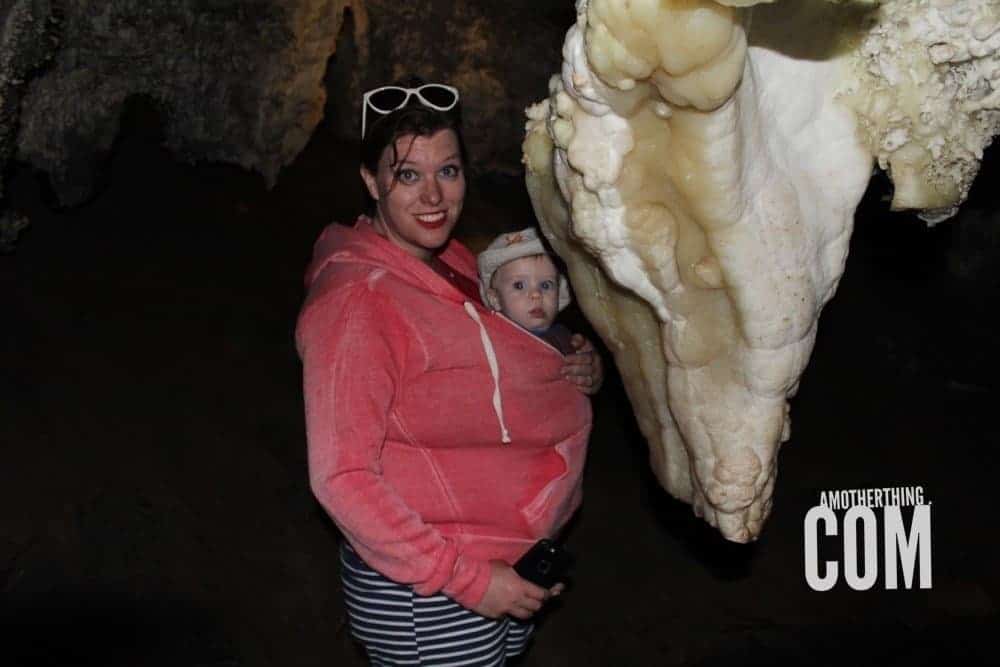 All in all, the cave tour took about an hour or so, and the kids LOVED it. They thought it was super cool (literally and figuratively!) and were talking about it for days! 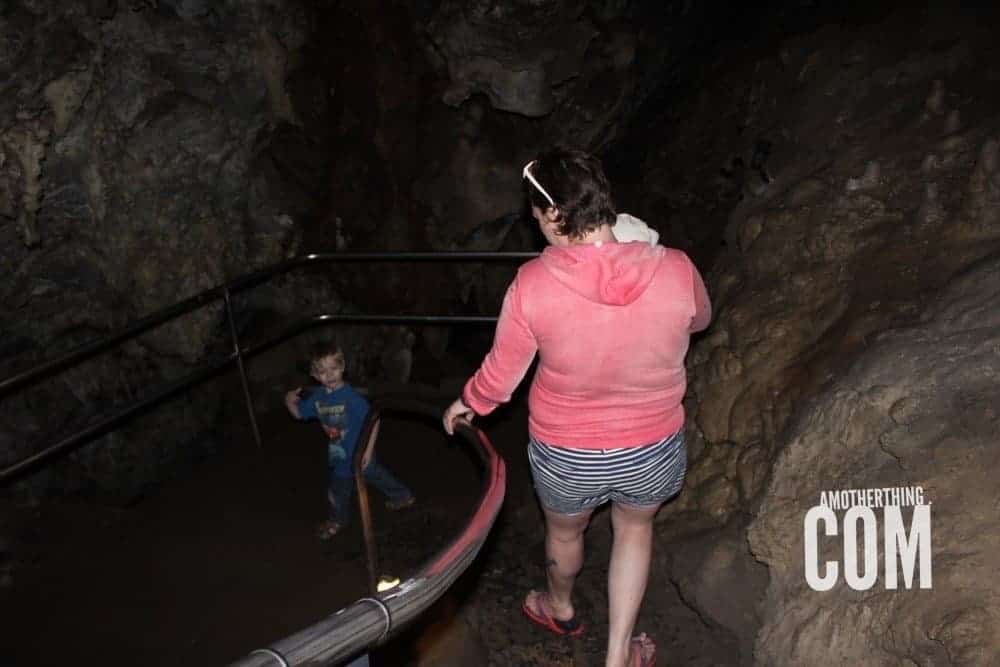 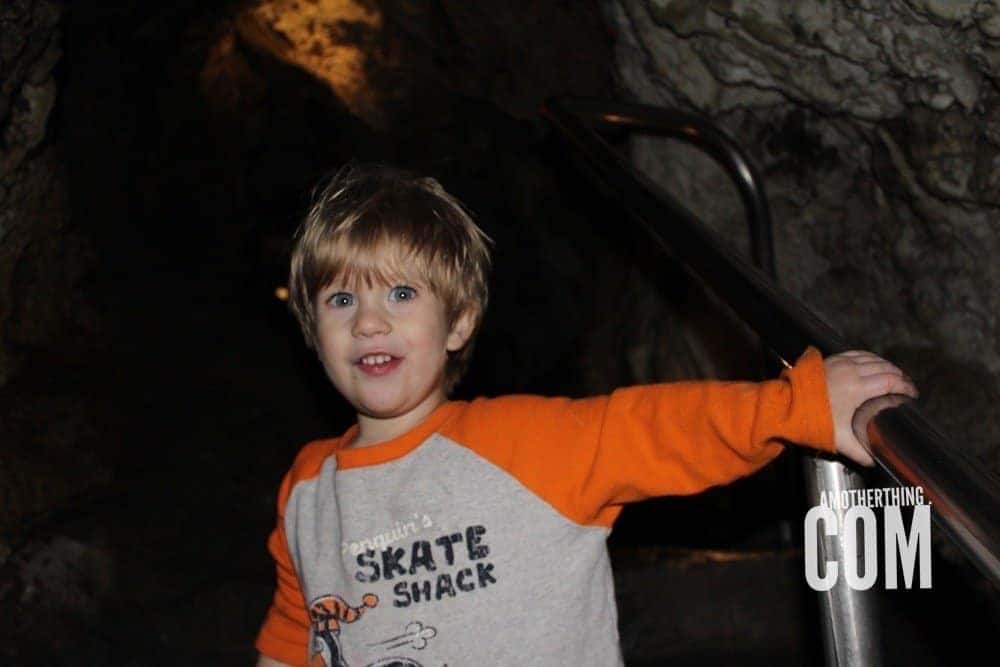 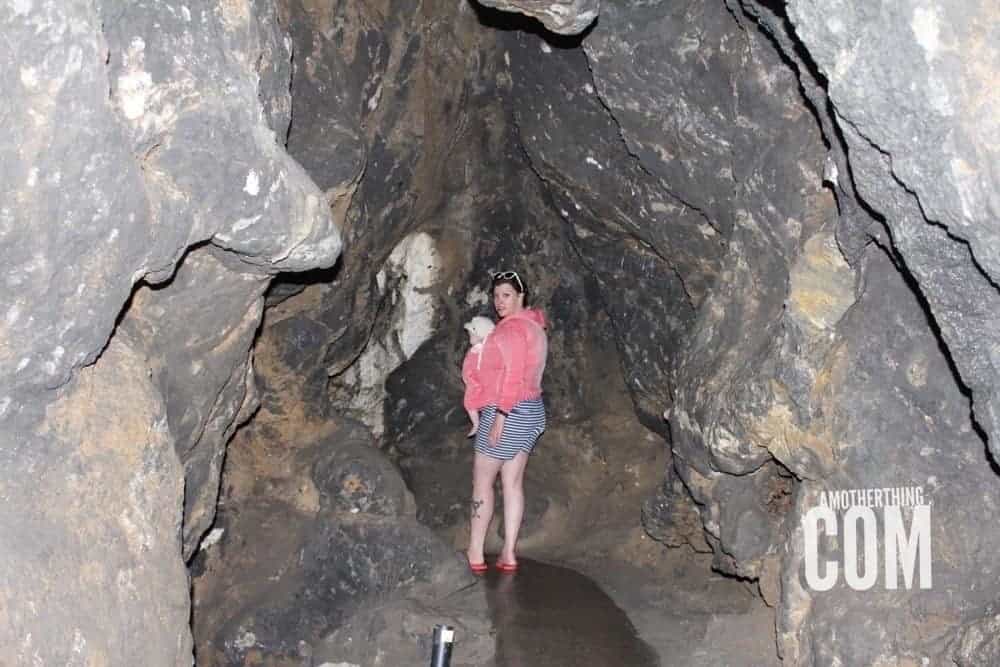 Once we were finished, we came out and took a few more photos and then made our way back down the mountain. While it was a lot faster going down, I have to say that it KILLS your legs trying to keep safe on the way back. Of course, I was wearing flip flops, so possibly this is my own fault. 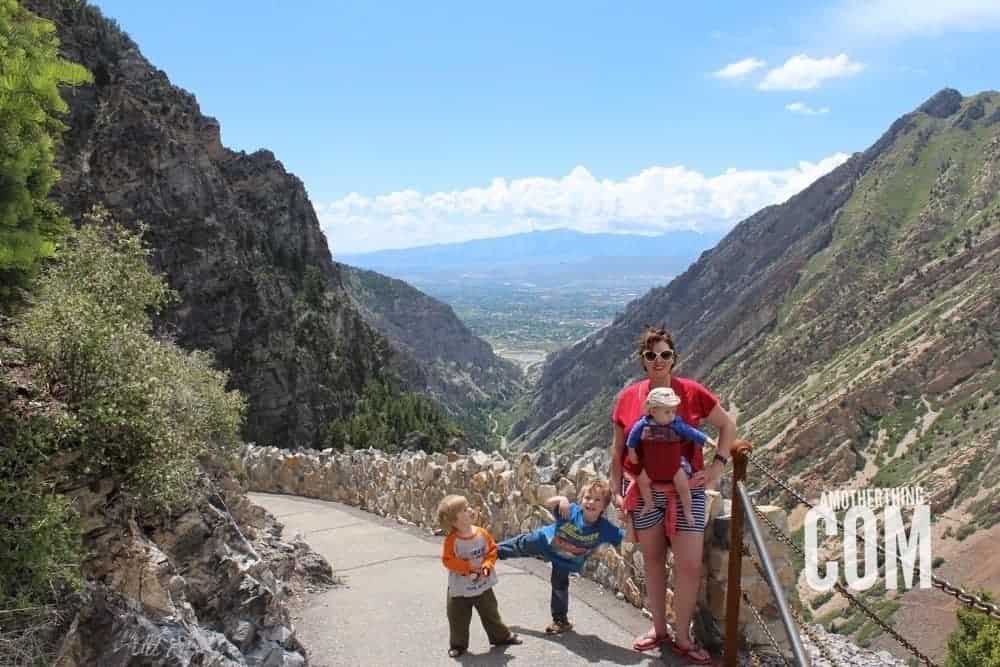 If you’re looking for a fun day out, I promise you can’t do better than Mount Timpanogos. It’s even perfect for strollers or wheelchairs, as it is completely paved the whole way up. And while it is a pretty steep rise, with a little effort, you’ll be able to experience some absolutely amazing views from the top.

Have you ever been to Timpanogos Cave? What are your thoughts?

Hello this is not in Lehi it’s in American Fork

[…] through Uinta National Forest into Provo Canyon on U.S. 189. It promises stunning views of Mount Timpanogos and other beautiful peaks. It’s free if you’re just driving through, but […]