At a party recently, a soon-to-be first time father told me, “Your son needs a hair cut.” I laughed. What else can I do? My kids are not well known for their patience, and getting a hair cut takes an awful lot of effort. Believe me, I started them young. All of my kids have been blessed with gorgeous flowing locks that are the envy of moms everywhere. But the upkeep on these lovely tresses is obscene. And since they refuse to sit still to let me wash, brush or cut it, you can usually find them looking rather like mini Albert Einsteins.

This isn’t to say that they are totally unkempt. They are super adorable boys, and even when I do manage to run a comb through their hair, they are pretty quick to reach their hands up to muss it again. They LIKE looking like feral cats. But obviously a good mama has to make sure that her kids are somewhat groomed from time to time. So about twice a year, I take them to the barber.

We have had some… interesting situations arise from these trips. From screaming and crying to half-finished cuts, we’ve seen it all. It’s no fun when your littles are thrashing about and screaming their heads off in public. But it’s somehow worse in a crowded salon.

A couple of months ago, I knew that Dan’s hair was a little out of hand. Since he’s been the better-behaved child when it comes to hair cuts, I figured we could get through it pretty unscathed. I took him to our local Supercuts. This was where I usually took my kids, though this branch was new to us. I did it right after we’d gone to see a movie (Pixar’s Home, if you care). So he was in a great mood going in.

We got in the salon, and he was happy to sit in the chair. He asked for his “cape” to wear, and the woman wrapped it around. She then grabbed for her scissors. Within half a second, Dan began to cry. It wasn’t terrible, but he was obviously scared. I suggested may I should sit in the chair and he could sit in my lap. The hairdresser got really testy with me. “I can’t cut it if you’re in the chair.” I was surprised by this, as usually it’s the hairdresser that suggests this. She finally relented, and I sat down, but Dan was still scared and crying. The woman refused to cut his hair. I was a little shocked at her not even trying, but before I could think too hard, Dan had stopped crying and said, “I’m ready now, mommy.” I smiled and went to put his cape back on.

But the hairdresser was rude, and she said again that she would not cut his hair and asked us to leave. I was completely shocked at her attitude. I know kids can be kind of difficult, but I’ve never had ANYONE refuse us service. Especially as he was now calm.

I felt humiliated, and I gathered the boys up to me and took them out. Dan started crying again because he was ready for a cut that was no longer coming.

When we got back to our car, I calmed myself down and grabbed my phone to google other places. I was delighted to find a listing for Cookie Cutters – a hair salon that caters to kids, only a couple of blocks away.

We drove over there, and I was immediately impressed. The place was completely set up to make kids happy. 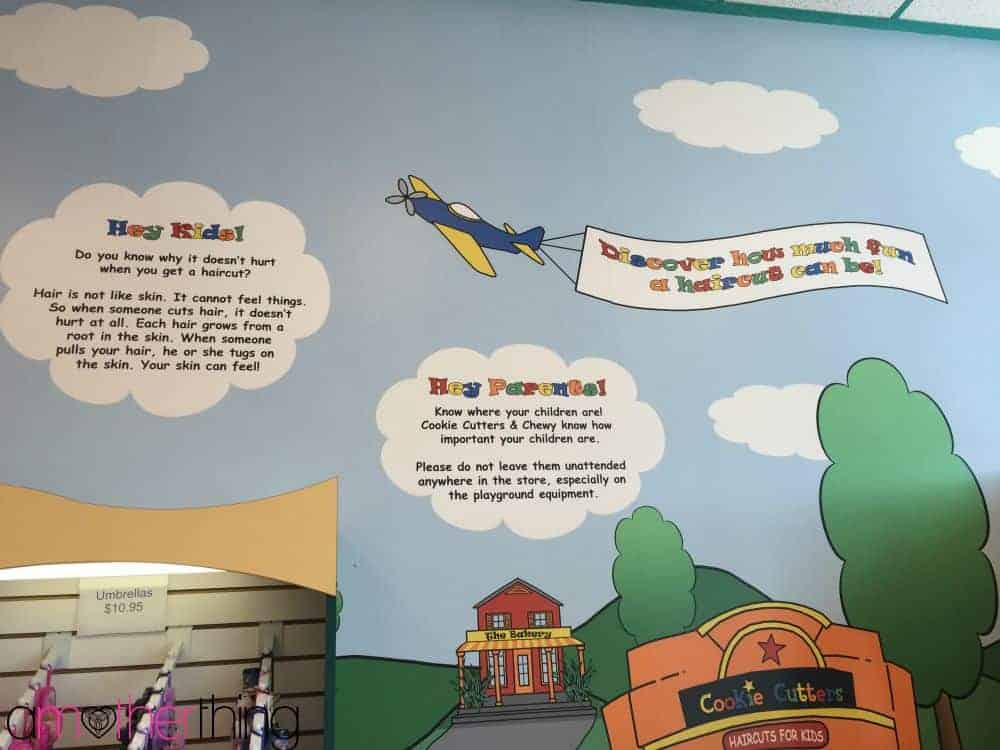 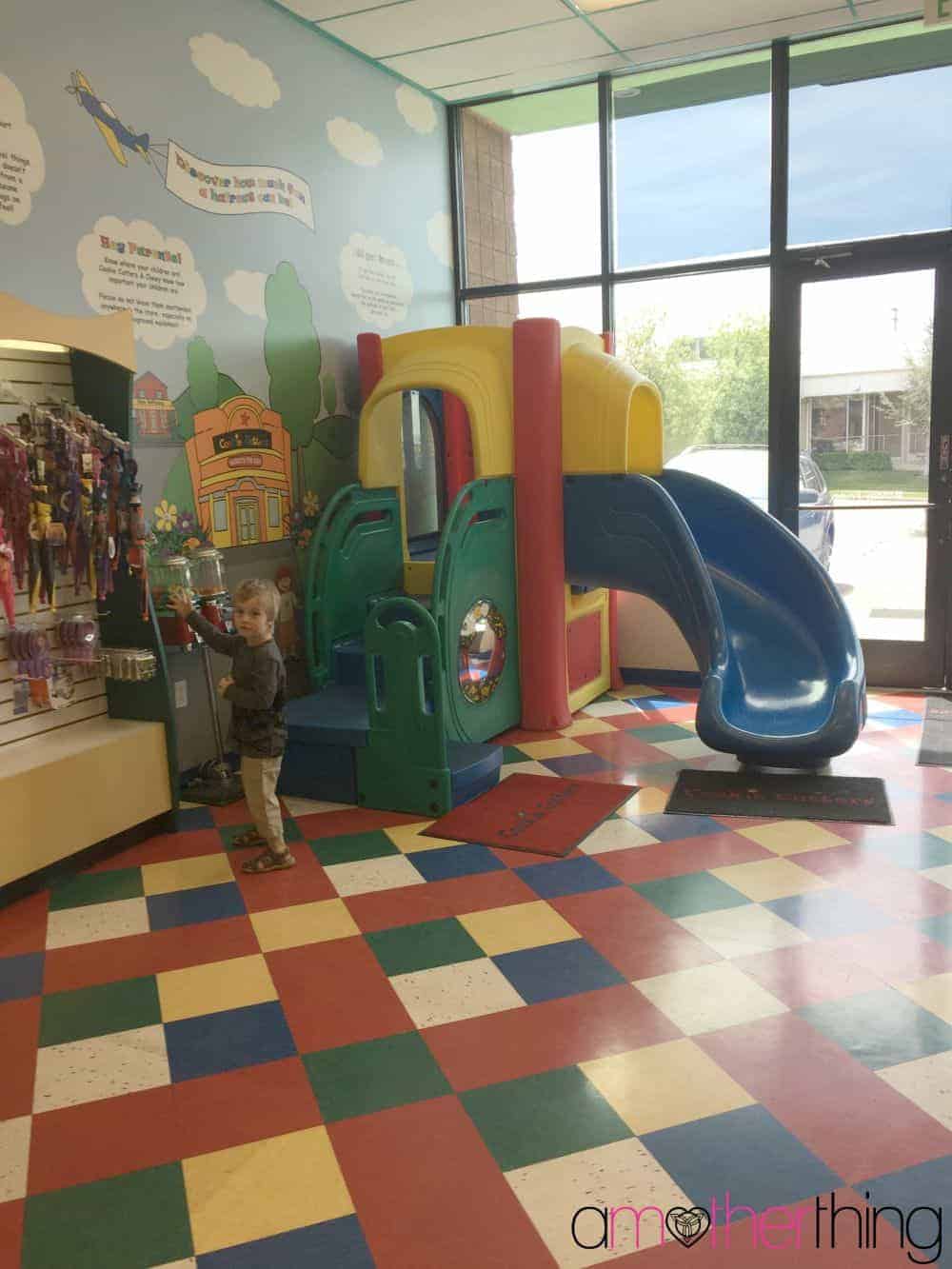 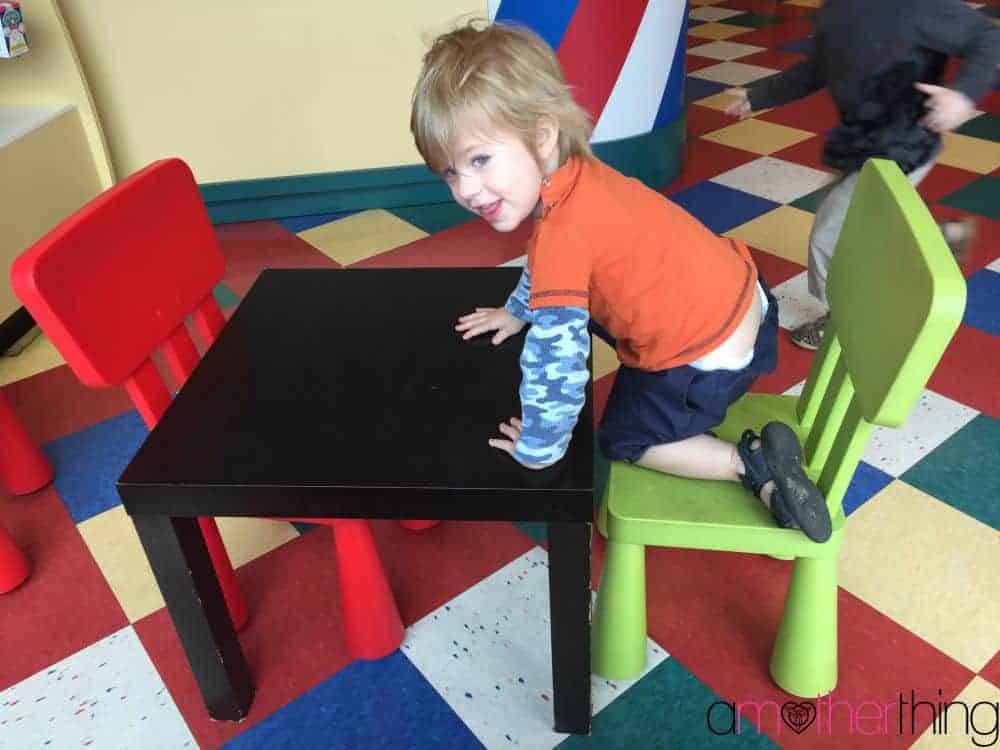 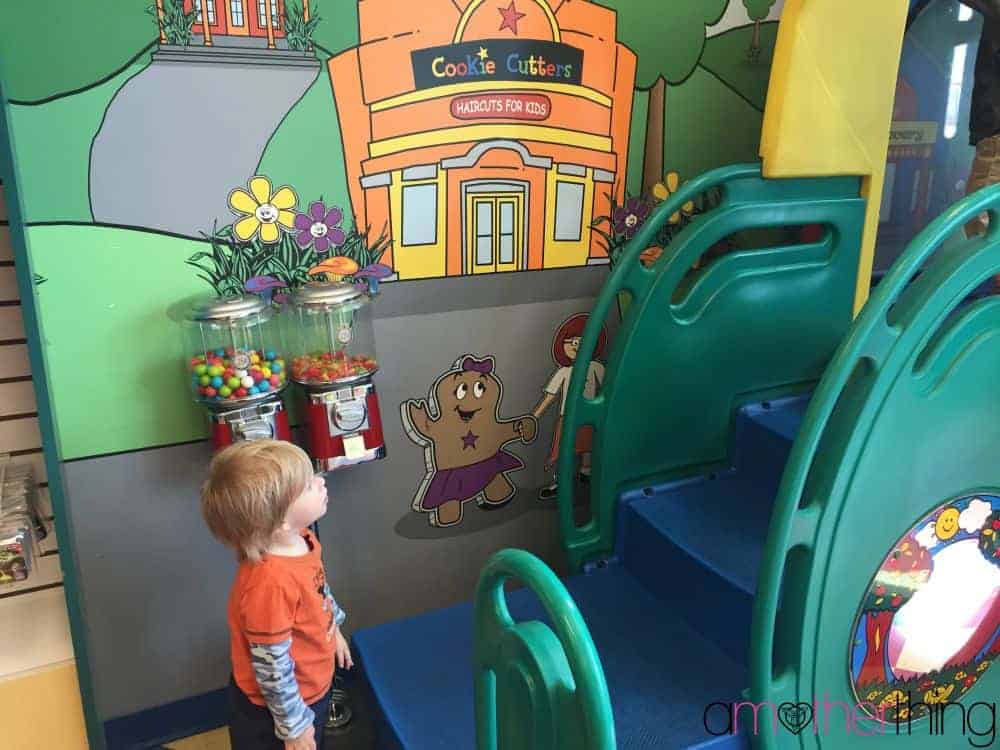 Inside they have a lovely little playground slide for the kids to play on while they wait. The walls and floors are vibrant and colorful. There’s a table and chairs with magazines and children’s books. There’s even a little computer on the wall for older children to engage with. 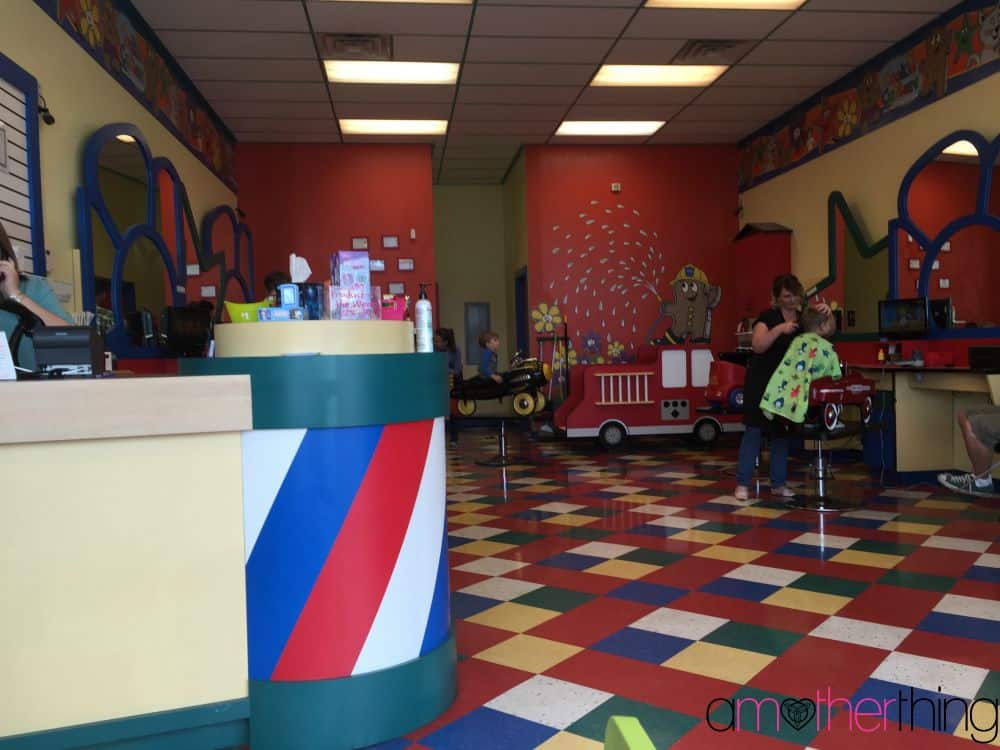 After we’d signed in, Dexter said he was in need of the toilet, so we headed back. Once again, I was thoroughly impressed. The best I could say about any salon I’ve been to is that he bathrooms were clean. But this one was so much more. Clean, yes, but again totally set up for kids.

It began with a baby changing table, always a plus. Then, it had two different sized toilets so that kids and adults could both be comfy! The sink had a step stool so children could reach the taps by themselves. And even the door to the rest room had a smaller door set into it so that kids could get in and out. They thought of everything! 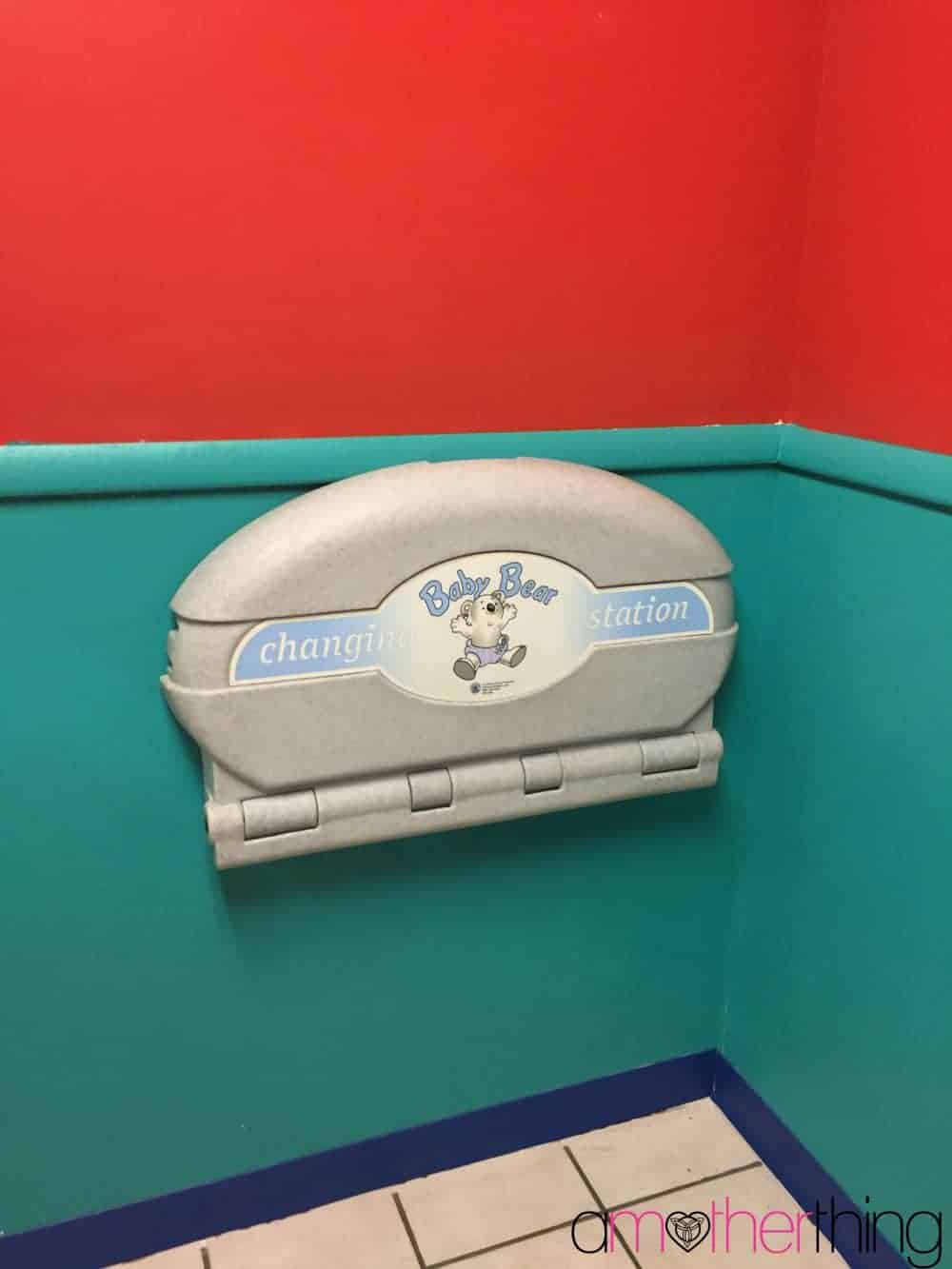 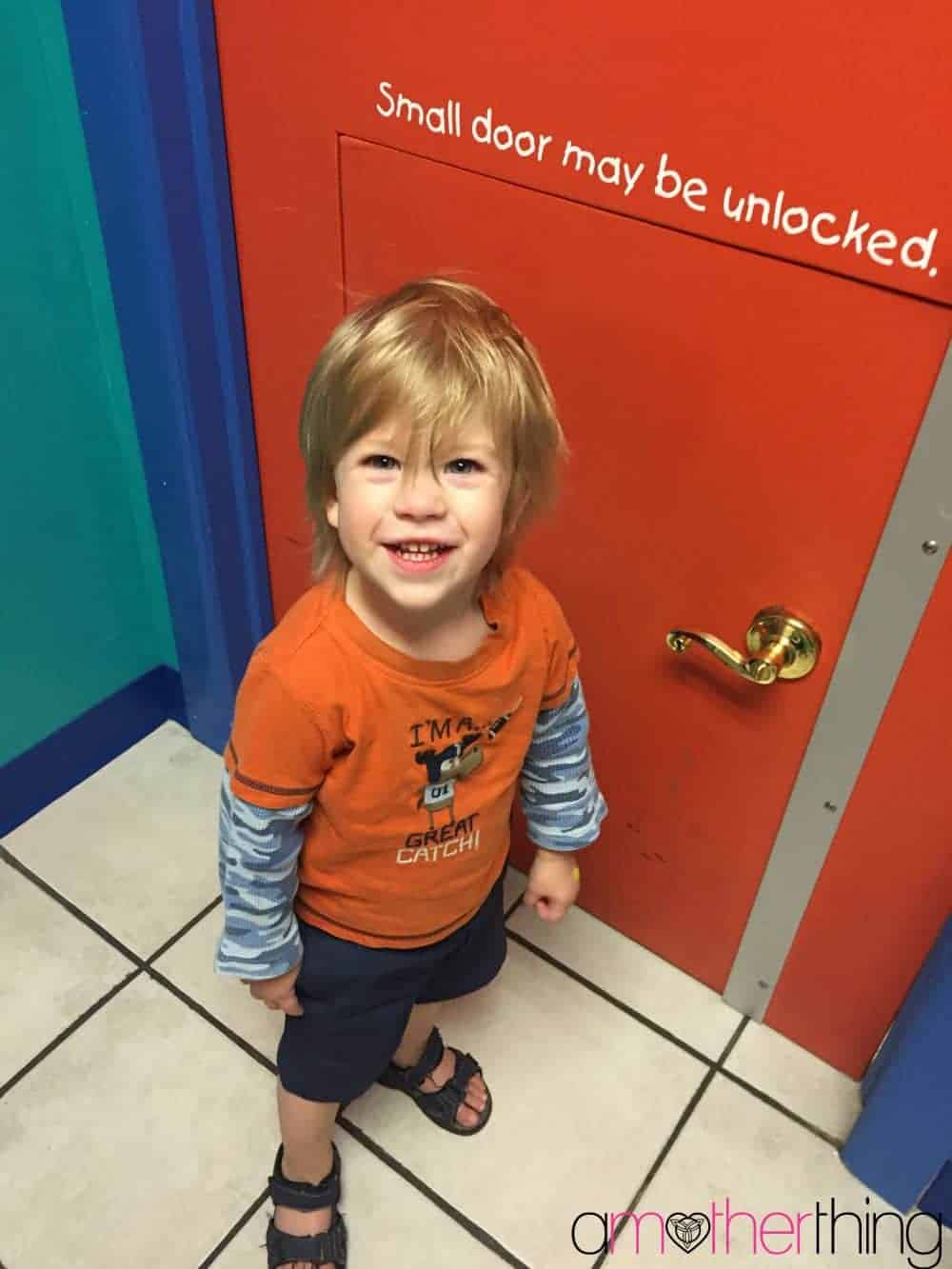 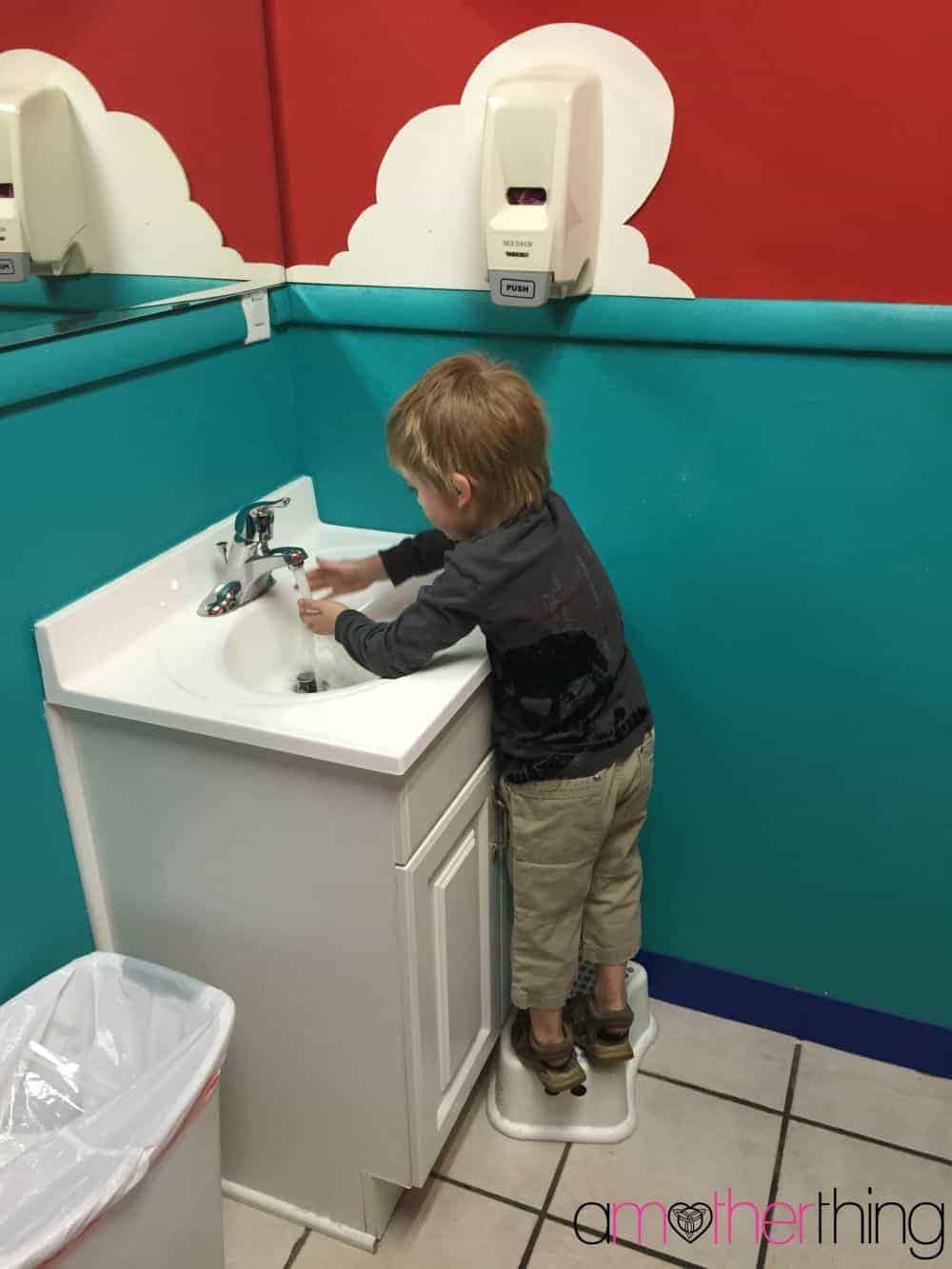 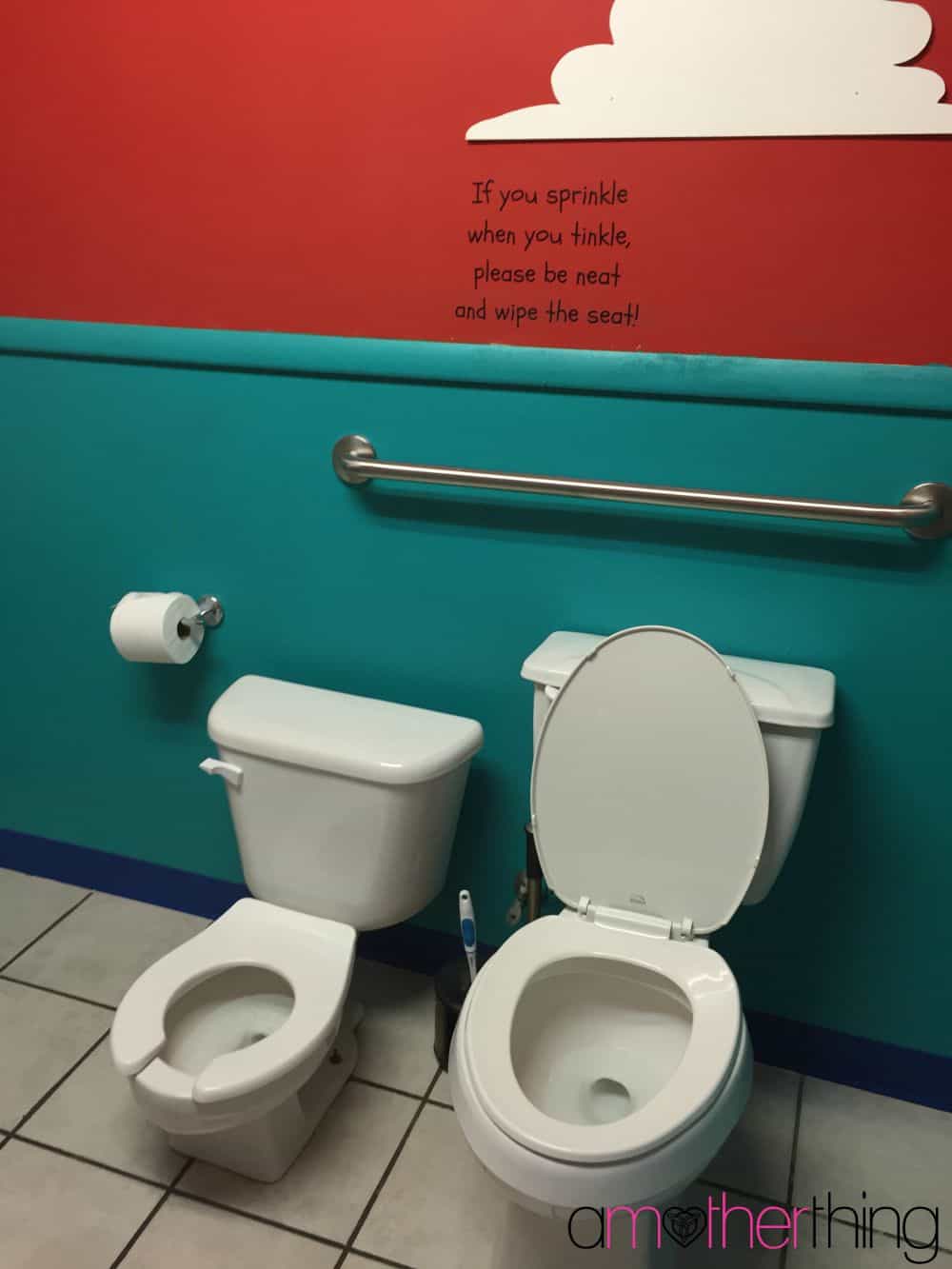 After we’d finished up in the restroom, it was our turn to get seen. We headed back, and Dan was allowed to pick his favorite seat to sit in. They had airplanes, racecars and choo choo trains in various colors. Dan was so happy. They even let Dexter sit in one while he waited for his brother! 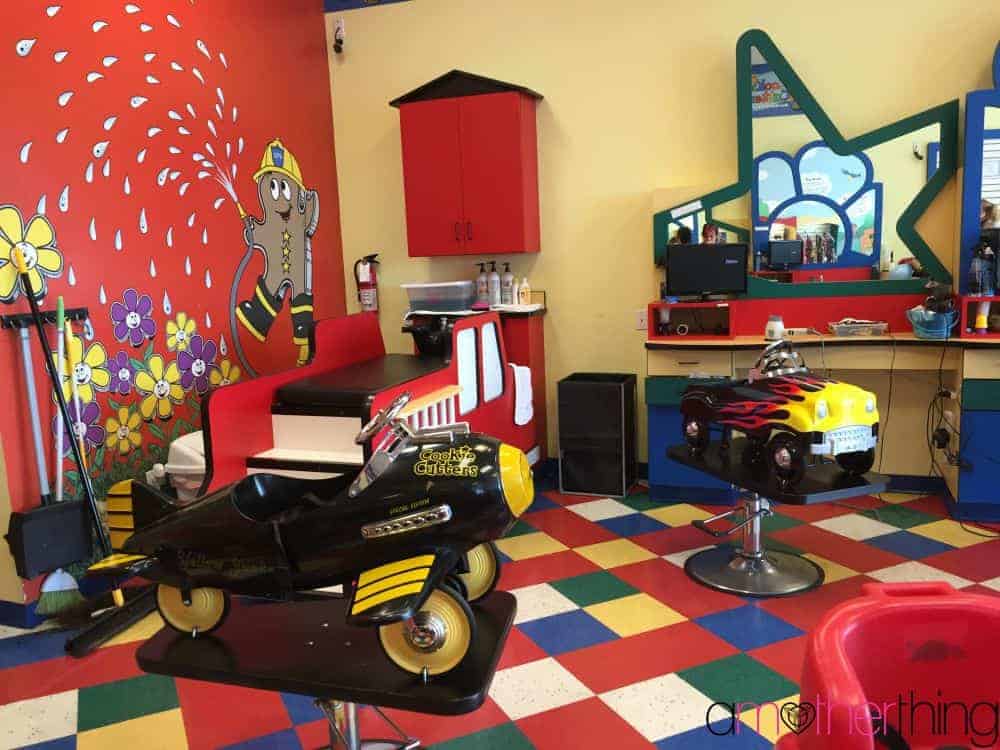 At each station, there was a TV which had streaming video, so the kids could pick their favorite show to watch. Dan was happy to watch Daniel Tiger’s Neighborhood as the hairdresser skillfully cut his hair.

I won’t lie. It wasn’t easy. He still cried a bit and made the cut difficult. But the woman was so kind and patient. I explained about our bad experience at Supercuts, and she was appalled. She could not imagine any scenario where a child should be thrown out for being scared. But she promised that they’ve dealt with the worst tantrums and the most scared children and all of them had come away with lovely haircuts.

After about ten minutes of careful cutting, we were finally ready to go. To add a nice cherry on top of our experience, both Daniel and Dexter were given balloons to take home. 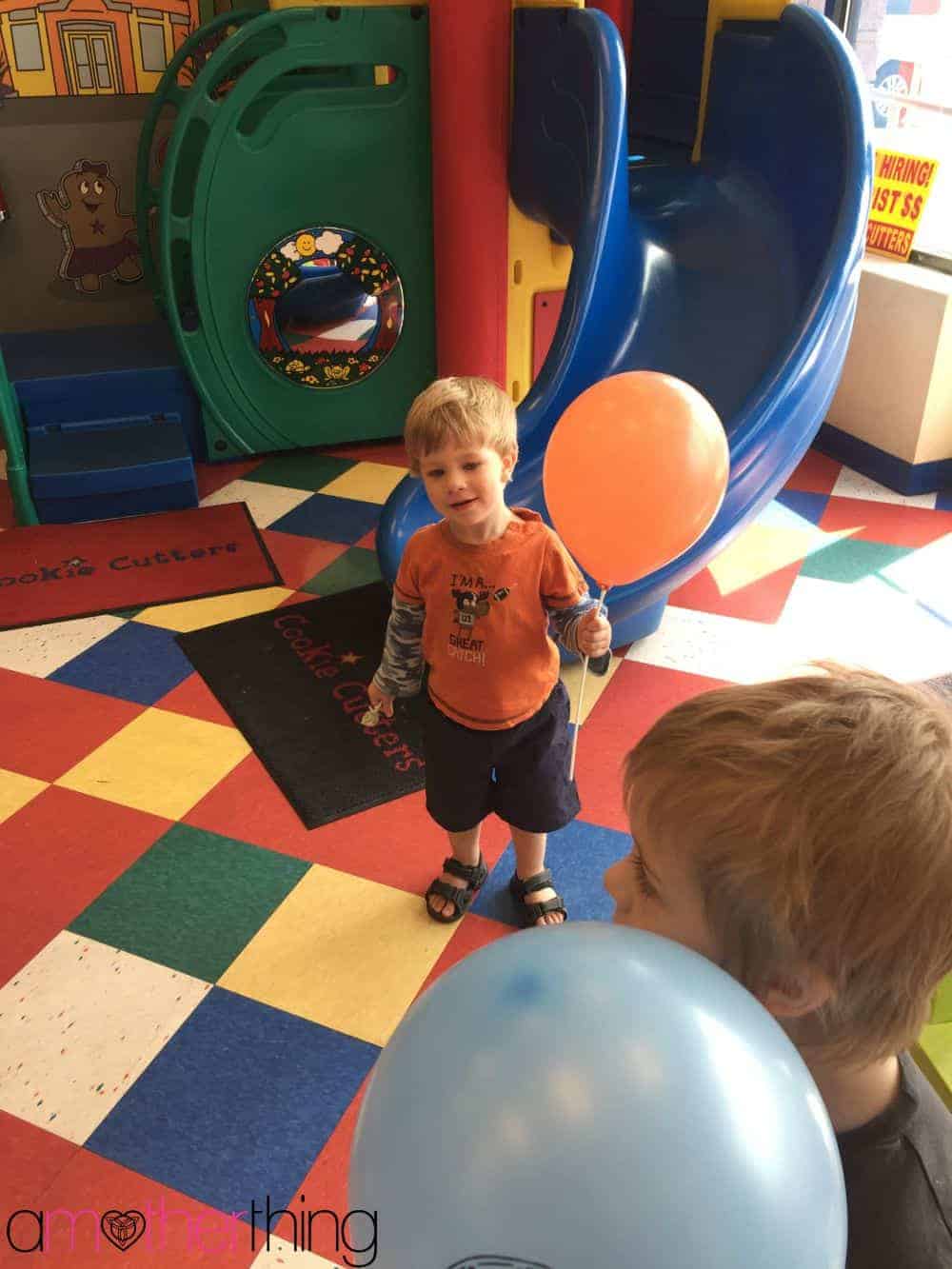 We totally loved Cookie Cutters, and there’s no doubt in my mind that we will be going back. In fact, we’re at the point now where Dex and Dan both need haircuts again, and baby Chester is nearly ready for his first trim, too! So I anticipate a trip in the near future! 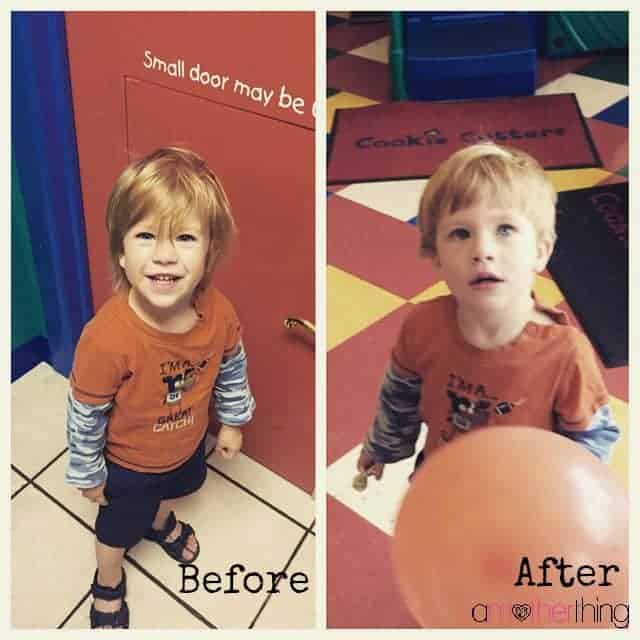 Such a lovely looking Salon. We will have implement something for kids in ours.

Must be a boy thing because my little man is the same way. I'll comb his hair and he looks me right in the eye and messes it up, and hates, hates, hates getting it cut. However if we had someplace like that to go he would want a hair cut weekly!