This is Dexter. He is two years old. He loves to be Batman and Superman and Spiderman. He’s a real boy’s boy. He pretends he is flying, and he captures the baddies who threaten us. 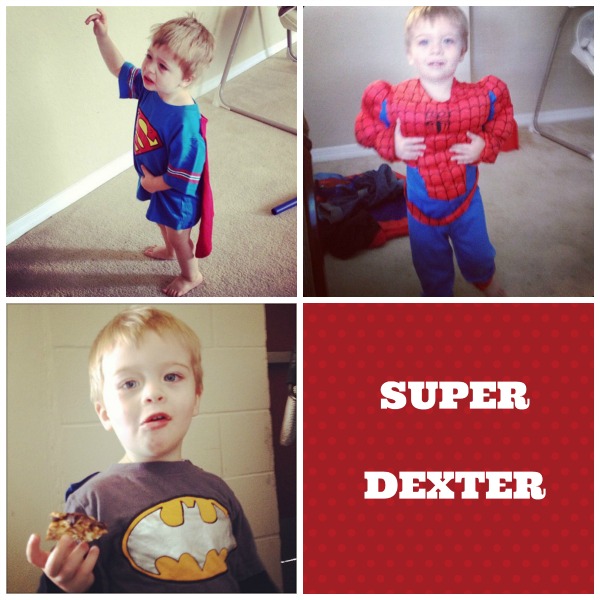 He is the sweetest little troublemaker you’ll ever meet.

He is a fabulous big brother. He was a later bloomer vocabulary-wise. He used to be terribly shy but has recently begun to come out of his shell. He loves new people and enjoys greeting them with a big “HI!” when he meets one.

His favorite color is pink. He loves Dora the Explorer. He has been known to wear my skirt as a dress, and he delights in cuddling with his mama.

Last night, I took my two boys out to pick up a couple of things from WalMart. Mark had to catch up on some work, so I ventured out on my own, which is something I don’t do very often. It takes a lot of work to get the kids ready, get them in and out of the car, find a shopping cart, keep them happy while I shop and get them home in one piece. You parents will understand this.

After struggling to get him dressed and get his shoes on, I had to pry an overlarge teddy bear out of Dexter’s arms, as he was set on taking him with us. This brought on tears and tantrums, which I somehow managed to calm very quickly. But when I attempted to remove my discarded lace flower headband from his head (which he’d been wearing all day), I saw him getting ready to fight, so I left him to it. Who was he hurting?

We got to the store, and amazingly I managed to get him to sit in the shopping cart with no issues. The fact he was wearing a cute girly headband made him feel good, and he was charming all the old ladies by waving like a little pageant prince. I snapped his photo after two old birds came up to tell me just how adorable he was.

He rocked that headband.

Soon enough, we were done with our shop and were making our way toward the front. As we passed through the produce section, two teenage girls began giggling and one of them asked, “Is that a boy or a girl?” I smiled and said, “He’s a boy.” I looked on at him adoringly as they continued to giggle.

Out of nowhere a big booming voice rang out. “THAT’S a BOY?!” The man was overly large with a bushy beard and a camouflage shirt with the arms cut off. He had tattered shorts and lace up work boots with no laces. I could smell the fug of cigarette smoke surrounding him, and there was a definite pong of beer on him.

With no notice, the man stepped forward, grabbed the headband off of Dexter’s head and threw it to the bottom of our shopping cart. He then cuffed Dexter around the side of his head (not hard, but that is not the point) and said with a big laugh, “You’ll thank me later, little man!”

At the same time as I stepped forward, Dexter grabbed his head where the man had smacked him and threw his other hand forward, stomping his foot and shouting, “NO!” I got between my son and this man and said very firmly, “If you touch my son again, I will cut your damn hands off.”

The guy snarled at me, looked at Dexter with disgust and said, “Your son is a fucking faggot.” He then started sauntering out, but not before he threw over his shoulder, “He’ll get shot for it one day.”

I stood there, shaking, fists clenched, waiting for the man to disappear out the door, and then I fell apart. I was shaking so hard, holding back tears and comforting Dexter.

Not a single person said or did anything. There were several people who had witnessed the encounter, but not one of them came over to offer support or console me or my son.

Let me repeat to you: Dexter is TWO YEARS OLD.

I was there with a two year old and a five month old baby, and my kid had been verbally and physically assaulted by a man. And no one did a thing.

I made my way to the front, still in shock, and I paid for my items and left. I did not report it to the management nor to the authorities, though I am considering doing both. But as I live in a tourist area, I doubt there is anything I can do to find the man – he could be anyone from anywhere.

It’s been almost 24 hours, and I’ve vented on Facebook and had many supportive comments. I have calmed down. I am able to look at the situation with as much objectivity as I am capable of.

There is so much wrong with what happened that I don’t even know where to begin.

This man removed an article of clothing that my son was wearing. It doesn’t matter that it was a headband. It is never okay.

This man forcefully touched my child without permission. He thought he was being funny. I did NOT think he was.

He called my son an extremely derogatory word AND suggested that he deserved to die.

How is ANY of this okay?!

A grown man who should know better decided it was okay to step in and “teach” my child what it is to be manly. He thought it was okay to judge my child because he was not adhering to HIS idea of what a little boy should be. Clearly, the man was a homophobe, which is bad enough – but to attribute gay tendencies to a two year old is as RIDICULOUS as attributing STRAIGHT tendencies to a two year old. It just doesn’t compute!

A two year old HAS no sexuality.

To think you can “teach” a child to be a certain way is unbelievable. Even if being gay is a lifestyle choice (which I don’t believe for a second), it is not a choice that a toddler can ever make. And much like little girls can play baseball or enjoy monster trucks, little boys can and do play dress up with mommy’s clothes, accessories, makeup, etc. Everything is new and exciting to a kid, and they learn by trying new things.

Mark and I are both completely supportive of love in all forms. Be you gay, straight, bisexual, transsexual or polygamous, it is YOUR business. I don’t judge, and I don’t try and change you.

And if one or both of my kids grow up to realise they are any of these things, it will not change a thing about how I feel toward them.

But right now, the fact that homophobia is so rampant, that gay marriage is still seen as dirty because homosexuals are “lesser” somehow and don’t deserve to have the same rights as straight folk, that people like that man in WalMart even EXIST makes me fear for my kids and their futures.

While we may accept and support whoever our kids turn out to be, I am scared beyond words at what it would mean for them if they ARE gay. Why should anyone have to live in fear because they fall in love with someone that you or someone else doesn’t agree with? Why should mothers and fathers of gay kids have to have an extra layer of terror at night because they know that the world at large is against their child?

Why does it matter? Do you really think your God or your Jesus or your deity of choice would be as judgemental as you seem to be? Even the POPE has come out and said it’s okay to be gay.

But all of this aside, whatever stance you take on the debate, it is a complete farce to ever allow your fear or disgust with an ADULT lifestyle color your view of a child!

And it is NEVER EVER okay to touch a kid who isn’t yours without permission. EVERYONE, even children, deserve respect.

UPDATE 8/1/13 – I have disabled further commenting on this post. Thank you to all those who sent out words of love and support. They were heard and appreciated. But it has become nearly impossible to moderate the comments because so many are coming in. And as there are many nasty comments and trolls here, I want to save myself and my family the stress and remove the option to comment. Thank you.