If your child is anything like mine, he or she may get really excited over the strangest things. Dexter’s current obsession is all about Dora the Explorer. He goes wild when he sees anything Dora related. So much so that we recently had to buy him a hot pink hat with her on it because he threw an almighty hissy fit when we tried to take it away from him at the store!

The funny thing is that he’s not overly concerned with Dora, herself. No, his favorite character is The Map!

He goes around singing the map’s song, and he is gets so excitable that he jibbers incoherently whenever he sees a map in any form or on any show.

So I thought it’d be a great idea to create a fun little treasure map for him so that he could enjoy his very own adventures. And I did it in such a way that he can actually follow it to places around the house!

It was so much fun, and it is now his very favorite thing. So much so that the night after I gave it to him, he took it to bed to cuddle and even made me kiss it good night!

If you would like to make one of your very own, read on and enjoy! 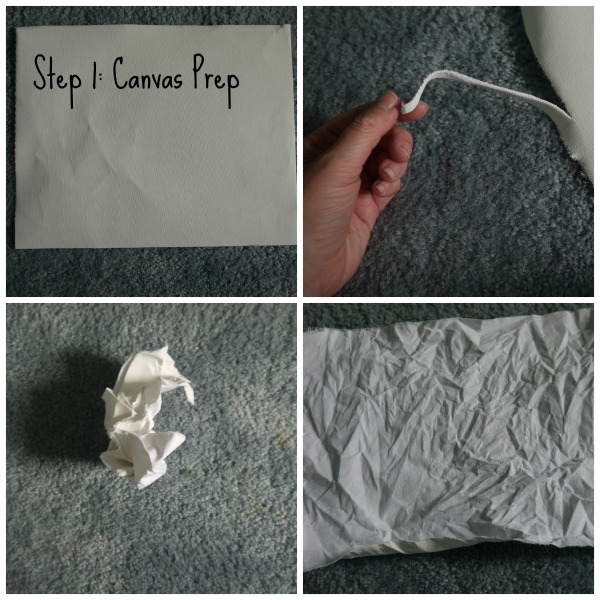 I used a sheet of basic white canvas, because I figured paper would never last. Dex would have torn it up within minutes or got it wet or worse!

After measuring a child friendly 11 x 14 inch piece of canvas, I gently tore the edges unevenly and then scrunched it up again and again until the canvas was quite wrinkled. I wanted the appearance that it had been around a while. I also needed the wrinkles so that the next step would work better. 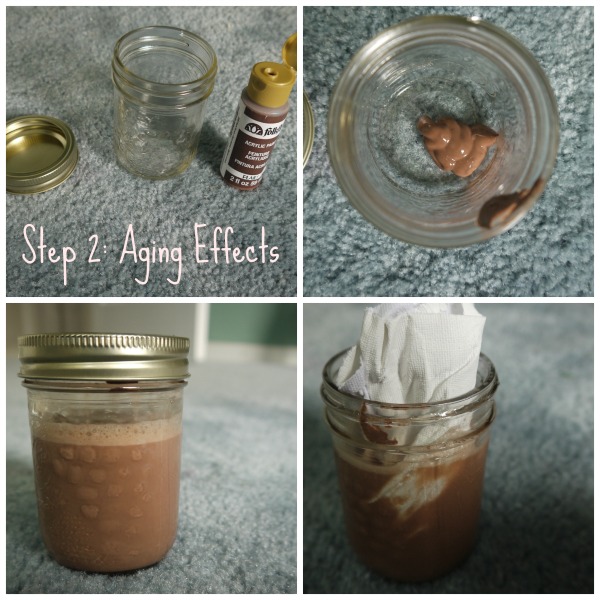 Plain white canvas doesn’t really look all that old or worn, so I needed to give it the appearance of age. There are lots of ways I could have chosen to do this. Coffee or tea are great for dying paper, but I figured my best bet with canvas was to use paint. But I didn’t want to just paint it plain brown. I wanted to look more natural.

The next morning, I took it out and hung it out to dry. 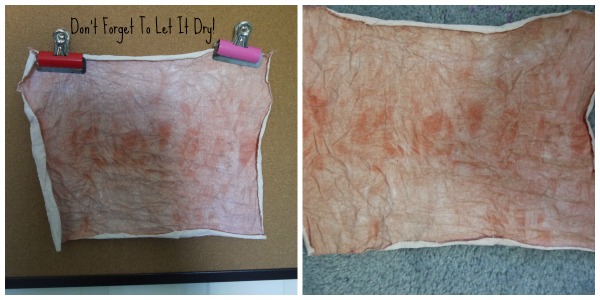 The result was a slightly mottled brown piece of canvas that almost resembled cow hide or somesuch! 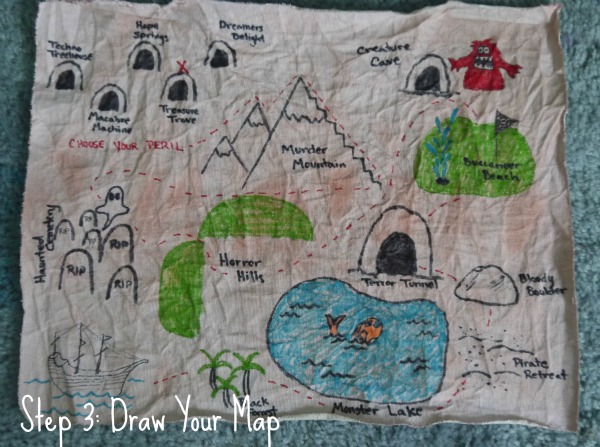 I wanted to be sure that Dexter could follow the map and be led somewhere. So I used landmarks in our own home to lead him. Doorways became tunnels, our swimming pool became a Monster Lake, and our two great big green couches became “Horror Hills.” I turned our staircase into “Murder Mountain” which led to several caves, each named for the rooms upstairs.

Of course, X marks the spot, and the aptly named “Treasure Trove” is Dexter’s room. 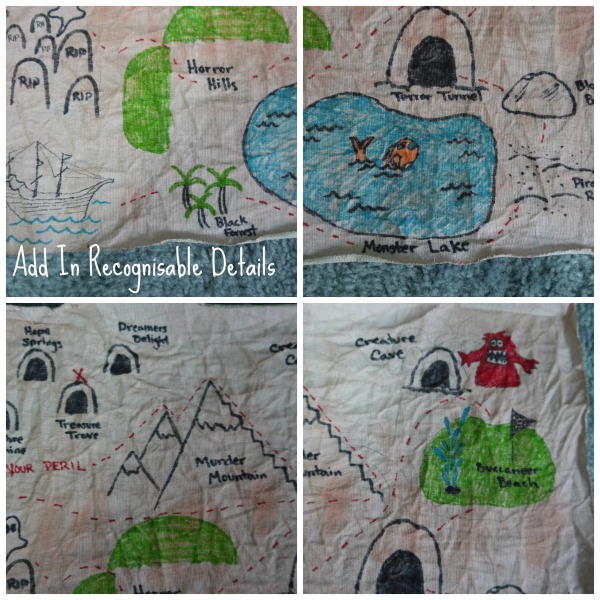 I even added in a “Creature Cave” with a scary looking monster to signify the guest room. Dex is always getting in there, and I figured if he thinks there’s a creature living inside he might leave it alone. But my kid is way too brave and grabs a flyswatter to do battle in there! 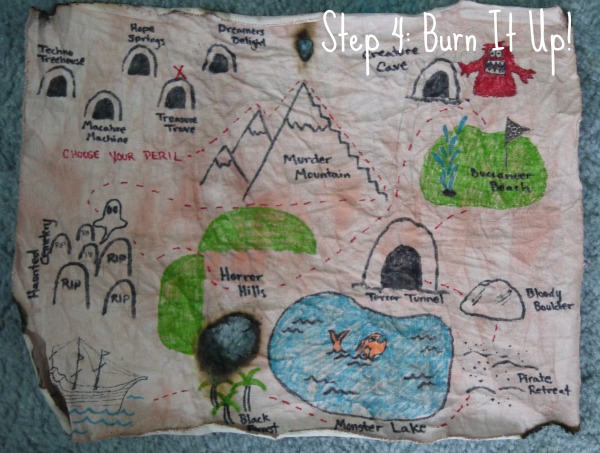 The idea here is that any treasure map worth its salt would have been through battle! So to add additional authenticity, I took a few matches and burned along some edges, as well as a few holes. Obviously be very careful if you do this. I stood over the bathroom sink as I did mine, and I made very sure not to let the fire burn too much. Canvas is extremely flammable, if you didn’t know.

The final step, as far as I am concerned is giving it a story. For me, I decided to make this a hand-me-down map from Black Beard. I wrote a small poem on the back which I read out to Dexter in my best pirate-y voice, and if it lasts until he’s older, it’ll be fun to see him read it back to me the same way.

Bring yer wits when searching here
for danger’s lurking everywhere!
And only he who’s pirate hearted
will make it out the way he started!

Ye buccaneer with heart of fire
will find all in his heart’s desire.
But if ye plan betrayal now,
I’ll make ye once this solemn vow:

“Turn ye back or suffer these:
blackened eyes and bloody knees!”

It doesn’t exactly promise walking the plank or a cutlass through the heart, but for a two year old, I’m sure it suffices.

And then, it was time to present my gift to my son. And it was wonderful. The look on his face was priceless, and the days that have followed have been magical! 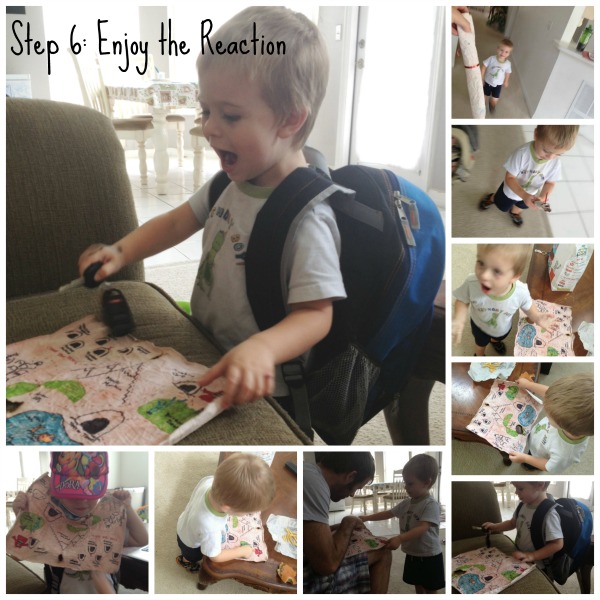 This is such a fun project to do. And if your child is a bit older, he could have a blast creating his OWN treasure map! You could create loads of them and pick a new one to follow each day. It would even be great fun on a long journey – give the kid a map and pretend your car is a pirate ship headed toward Treasure Island!

I know we’re going to have a blast with this one, and if and when it wears out, we’ll just make a new one with all new adventures to discover!

Give it a try and let me know how it turns out!

Genius idea. Our children would love to have such a treasure map!

Kristen from The Road to Domestication

Hi, Katie! We wanted you to know that we LOVED this so much when you linked it up to the #HomeMattersParty last week...we FEATURED it THIS week! Come by and check it out if you have a chance :) Happy Friday! http://theroadtodomestication.com/2015/06/26/home-matters-linky-party-43/