For over three years now, since just after I found out I was pregnant with Dexter, I have been planning my next tattoo. With three under my belt, I have been yearning for another. Many people justify their hatred of tattoos by saying, “But they’re forever!” Well, truly, there is nothing that will change your body more than having a baby. I wear my stretch marks with pride, and I know my skin will always slightly sag in the middle, no matter what I do. So really, a tattoo is no big deal, right?

But aside from all of that, there is something I wanted to proclaim to the world. I wanted anyone who looked at me to know just what I stand for. But aside from having my kids with me at all times for the rest of my life, there’s no easy way to say, “I’m a mommy.”  And while this little bit of ink isn’t exactly a neon sign proclaiming motherhood, I like to think it is clear enough when you really look at it to know that it represents eternal and unconditional love.

Anyway, as I said, I have been planning this for over three years. And since I now have TWO very wonderful kids to look after, I have been getting even more anxious to get it done. With everything that happened in the last few months, I really felt like now was the time to wear my heart on my sleeve, as it were. Or in this case, on my back.

Mark agreed to come with me, and we headed to a nearby tattoo parlor after checking out local reviews online. This one had a good reputation, and so I took my hand-drawn design to the pro. 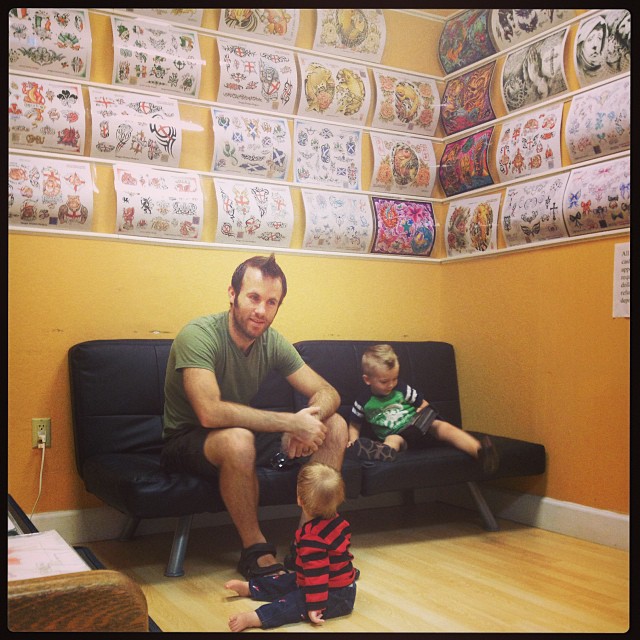 The artist was able to clean it up a bit and make sure it would look good where I wanted it. While he went and set up, I filled out paperwork, paid $200 cash and waited patiently. 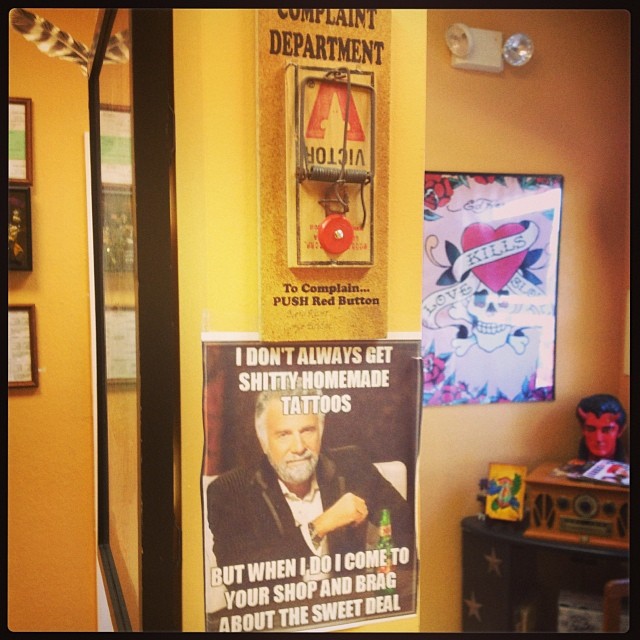 Once I made it inside, I settled my nerves by sucking a Tootsie Pop. I had to pull my dress down a bit so the man could get where he needed to be, and I was made to straddle a chair while he spooned me from behind. I’d left the choice of colors up to him, and he suggested blues since my kids are both boys. 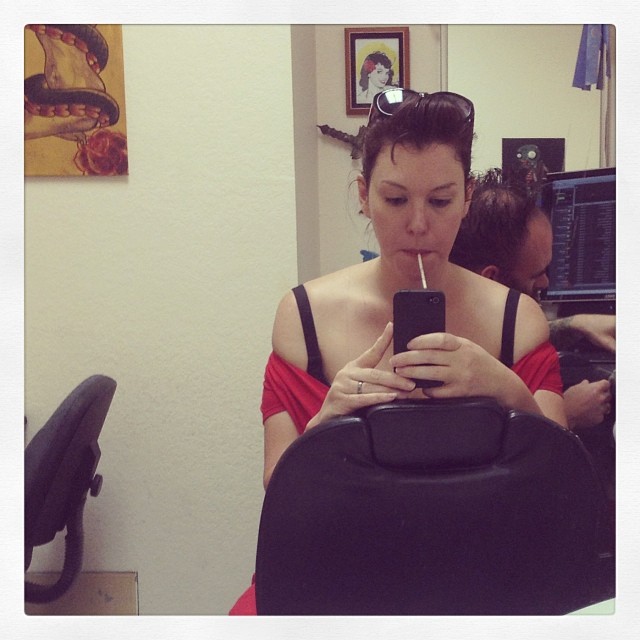 I quickly updated facebook that I was about to be inked, mostly in an effort to get support since I was slightly nervous. Friends and family showed enthusiasm, and I settled in for what was sure to be a painful experience.

And you know what? It WAS painful. Since it’s been nearly 10 years since my last tattoo, I’d forgotten JUST how painful they can be! But you know how it is… we do what we must.

Mark came in with Daniel in tow at one point so he could take a picture of it being done. He asked if I was in pain, and I said no. I didn’t want to admit just how dang much it hurts! For those who have never had a tattoo before, imagine someone taking a lighter and slowly rubbing it across large areas of your skin over and over again. It’s more of a burning sensation than of a cutting one. And there is blood. Sometimes lots of it! 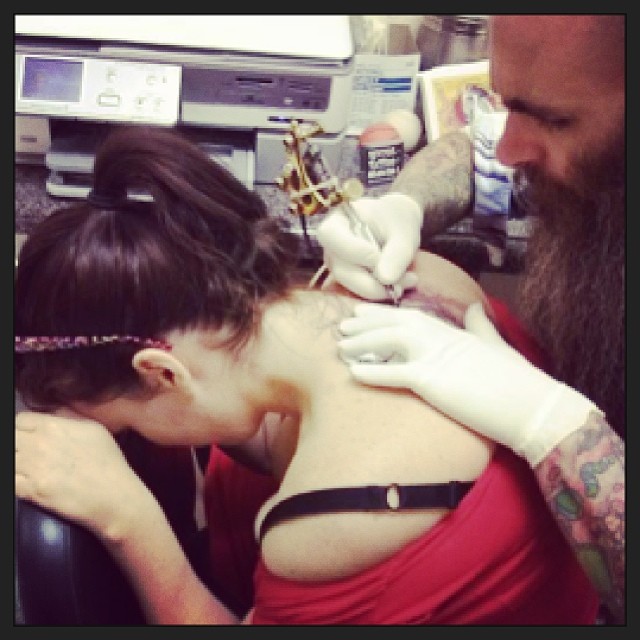 Anyway, the whole thing lasted about an hour, and it hurt, but it was oh-so-worth it in the end. I love the way it turned out, and I am happy to finally have it done. 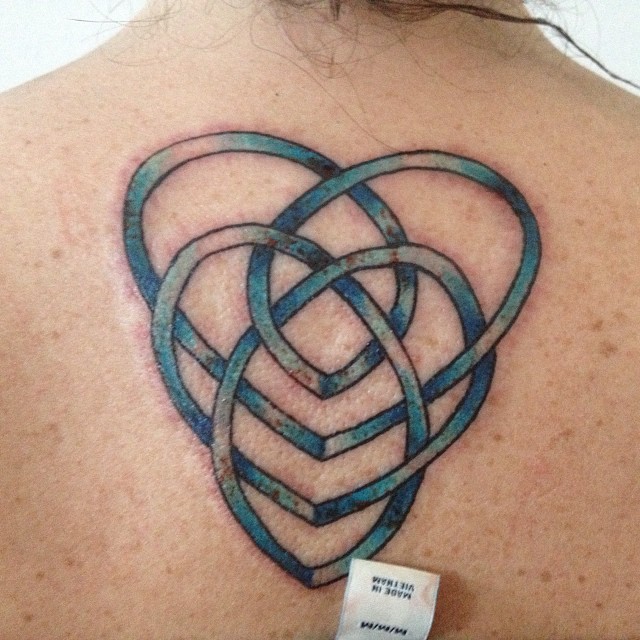 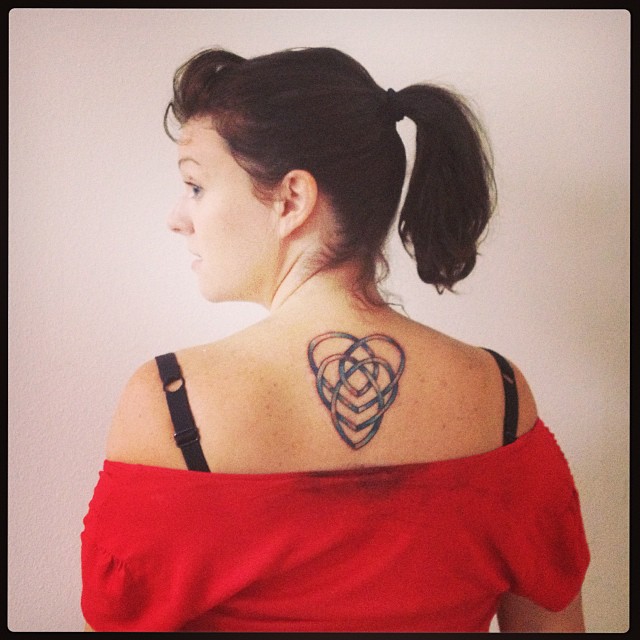 So what is it? It is the Celtic motherhood knot symbol. Two hearts, one large and one small, signifying a mother and her child. The hearts interconnect and are one long, unending unit, signifying an unbroken and forever love.  It is associated with the phrase Grá Mo Chroí, which means “The Love of My Heart.”

And the pain was totally worth it. 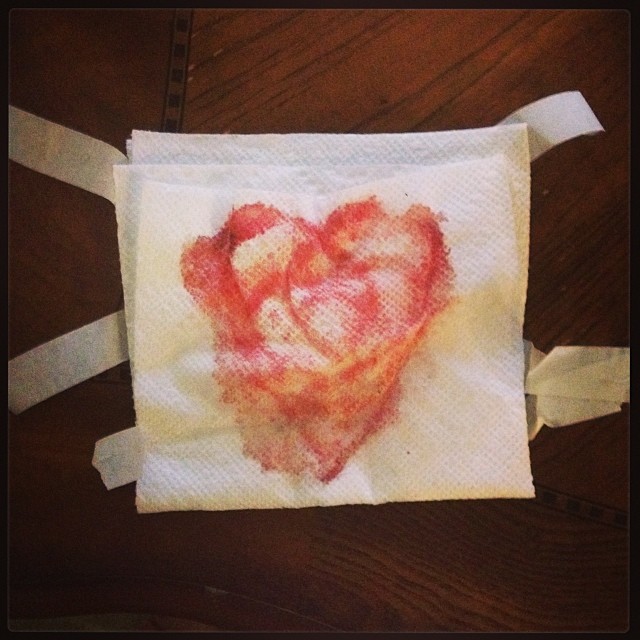 That is very true how a mom feels for their kids, I have tattoos and there are meaning behind every one, now I'm getting one for my mom it's been a year since she been gone, being at the other end the kids has the same love for their mom, so from a kid point you will always be the love from them. It looks wonderful...

Hi, thanks for the post! I love that inks have their stories! I’ve been avoiding tattoos but when I got my custom made one I undestood it can look really awesome on your skin. I don't understand how people can get a tattoo from a catalogue without knowing anything about meaning. What do you think about custom made tattoos? Thanks