The Picture I Hesitate to Publish

Lord knows that I am not the type to hold back from sharing “sensitive” photos. I got more than a little kickback the time I shared my “real motherhood” photo because it featured a hugely engorged breast exposed to my three kids. Apparently that was an unacceptable thing, despite the fact that I was exhausted from breastfeeding at the time. I didn’t let it bother me.

Last summer, I shared photos of myself in a bikini, trying to reiterate the importance of exposing my three boys to different body types. The reception was overwhelmingly positive, but again I was lambasted by a small minority who thought it was inappropriate and attention-seeking. I ignored those people, too.

Now that 2017 is here, I teamed up with a friend from the UK to start a photo project, whereby we’d share a family photo every single day for a year. Neither of us has enough photos of each of our families, so we wanted to try and fix that. Our project is called #FamilyPicADay2017 (feel free to join in!), and we are sharing photos on Instagram and Facebook. 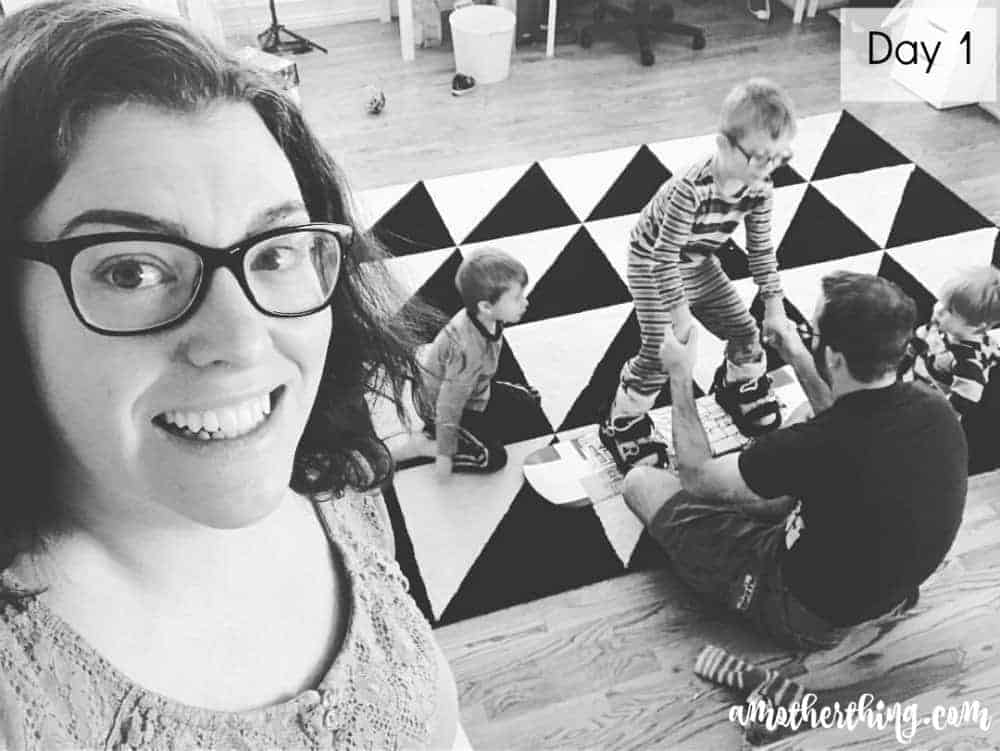 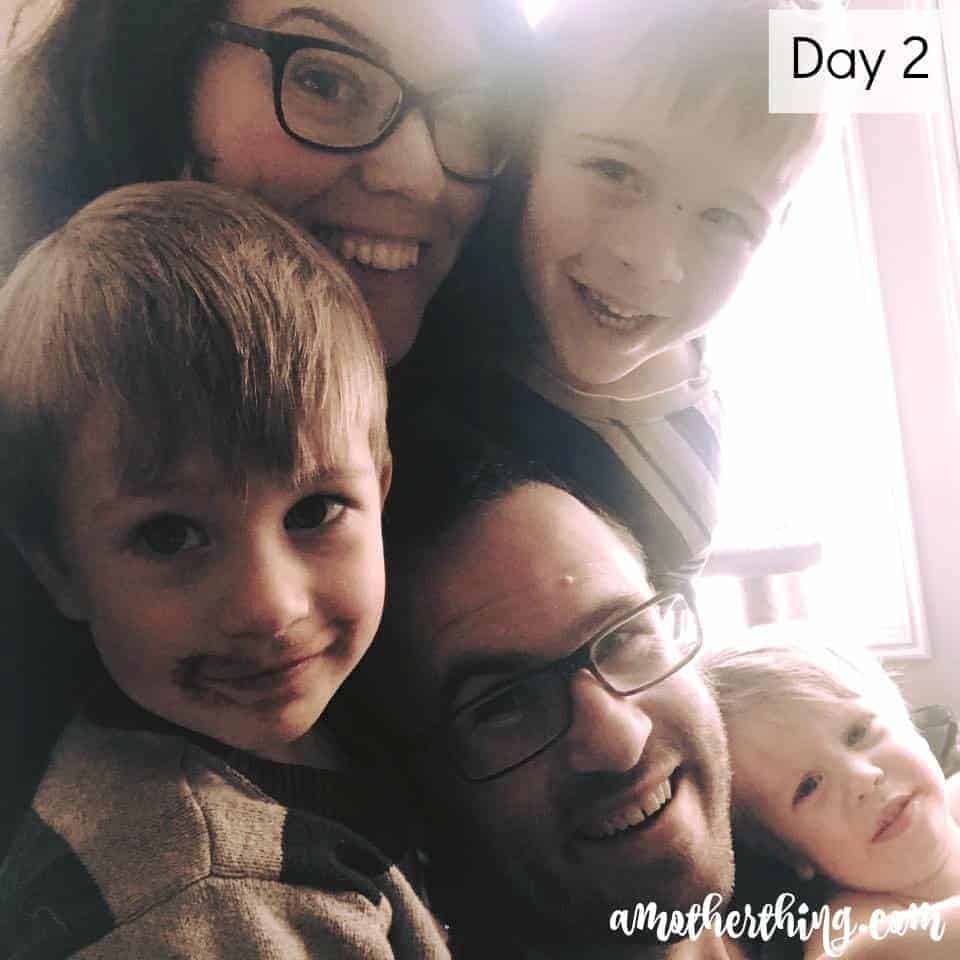 Remembering to snap a whole family photo each day is difficult, I’ll be honest! Sometimes it gets to the end of the evening, and we’re putting kids to bed, and I finally remember. We’re only a week into the year, and I’ve already stressed out a bit. But mostly, it’s been really awesome. I’ve taken more family photos in the last week than I probably have in the last year! That’s worth the price of admission right there! 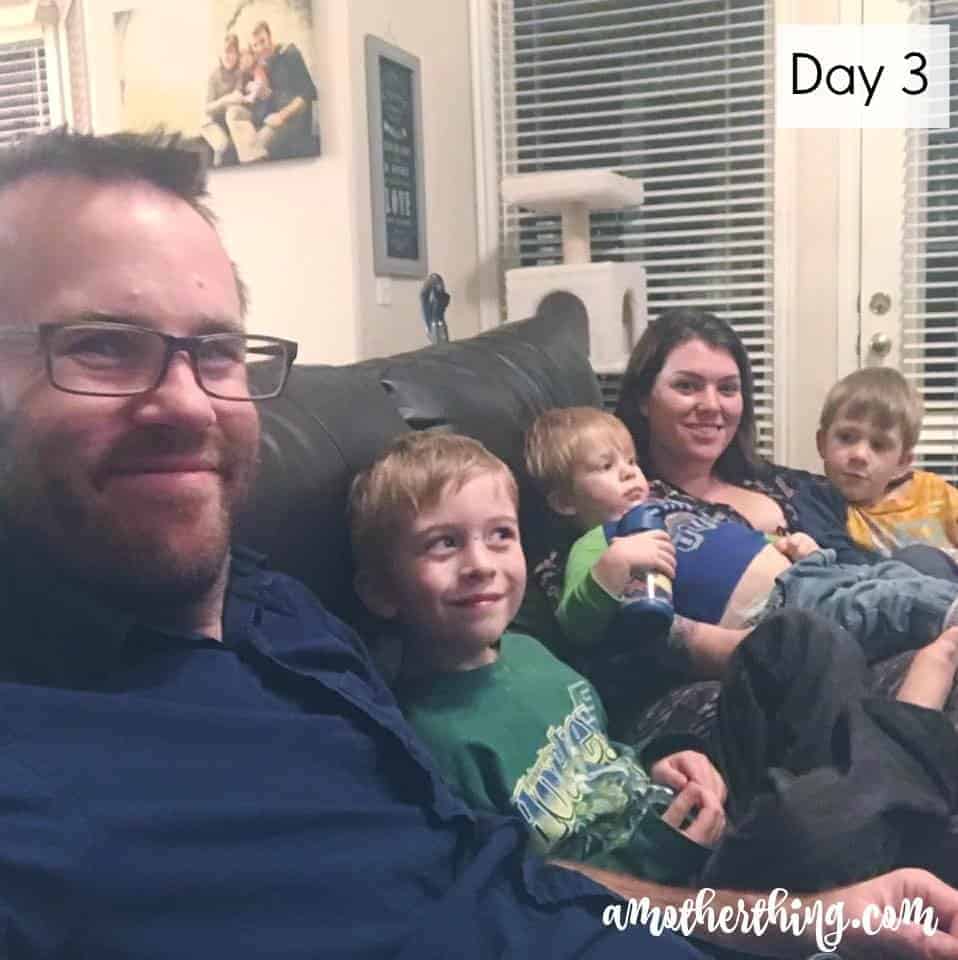 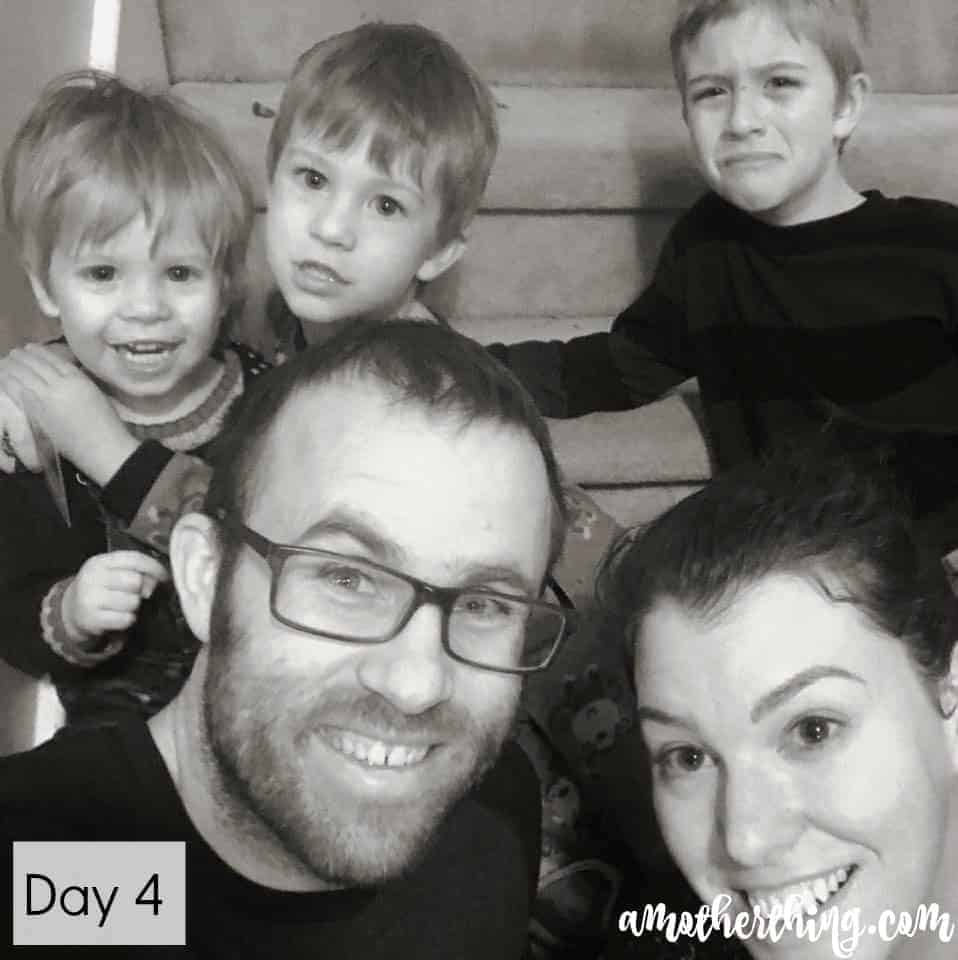 We’ve discussed what to do about taking pictures when Mark or I is out of town. Both of us travel a lot for work, but this project is a priority. So our plan (which we actually have to put into action tomorrow as Mark is away for much of this week!) is to facetime or skype and then take a screenshot. We’ll all technically be in the picture, though it won’t be a traditional photograph. 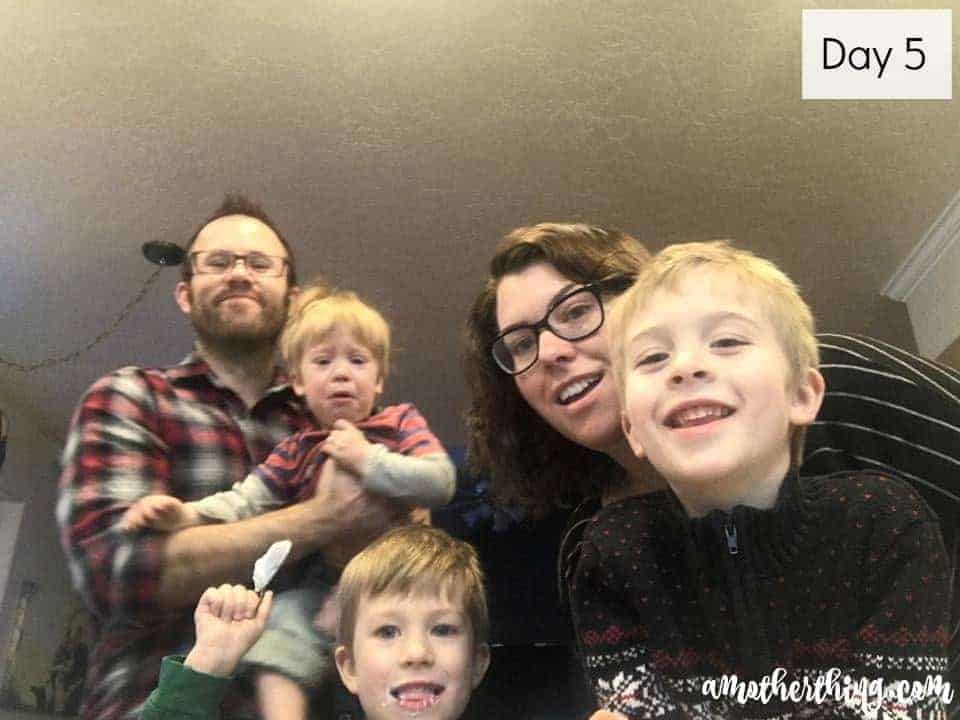 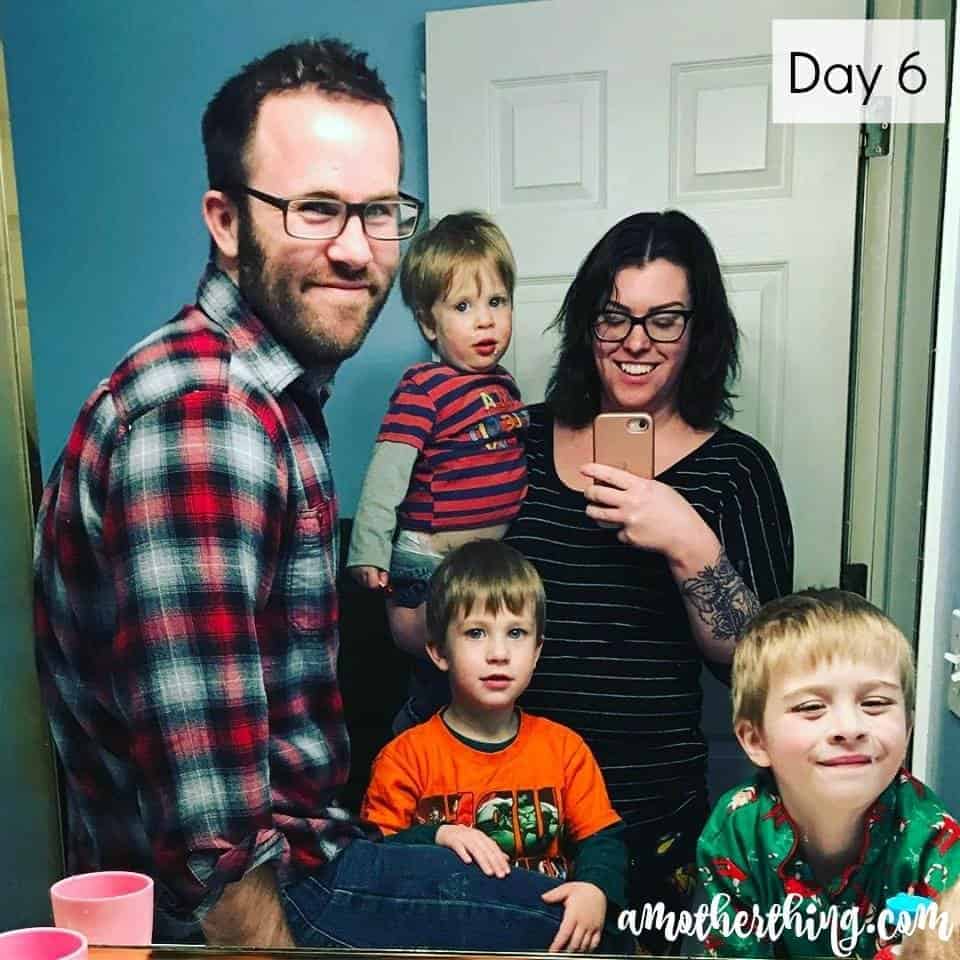 We’ve managed to catch several candid photos in the last week. Some of them have funny stories to go with them, and some are just getting the job done. 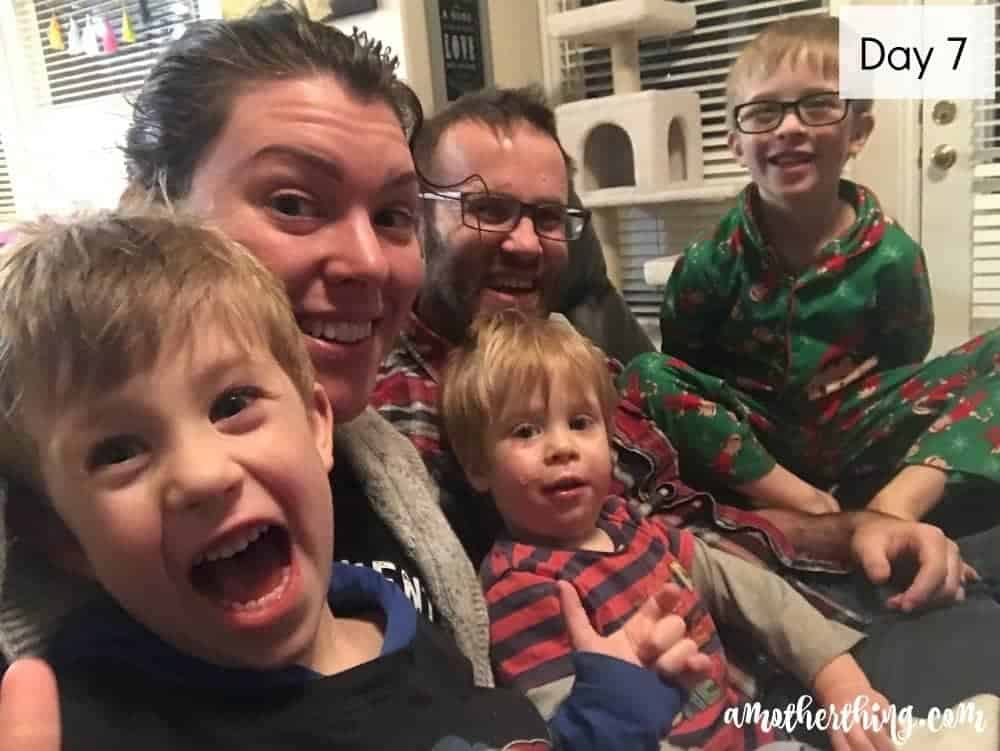 But today, I have suddenly been presented with a conflict. Our family photo today is definitely non-traditional. At the time it was taken, I gave no thought to it – I just thought it was a fun photo that would depict a sweet moment between the five of us. But a few hours later, I suddenly started having doubts. The photo in question… is of a family bath. 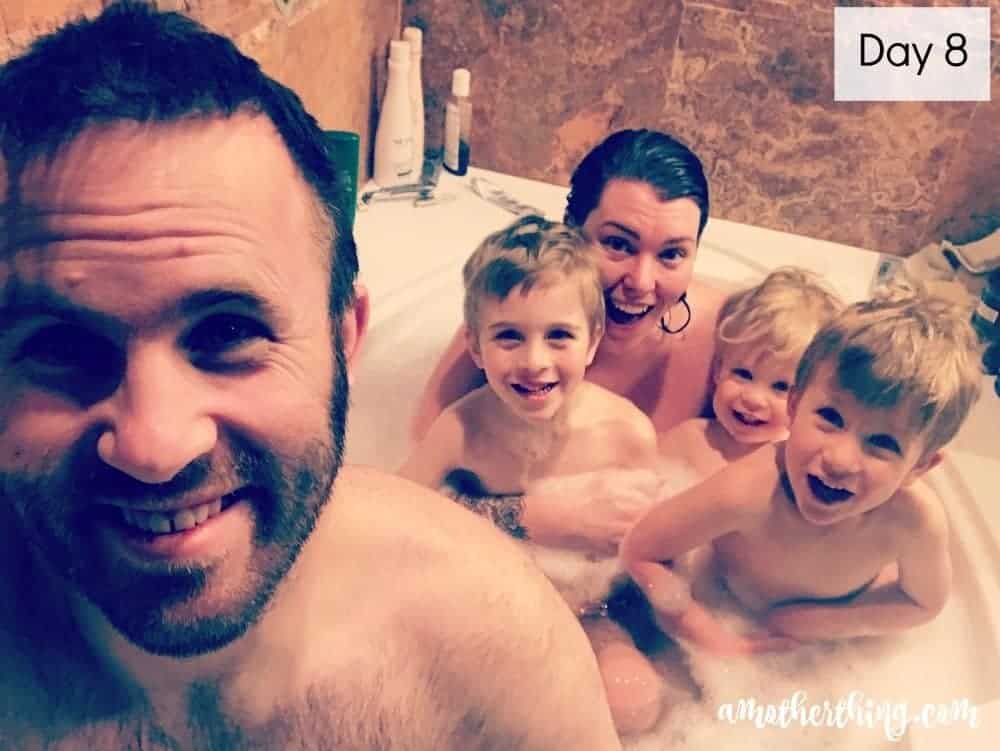 You may remember a couple of years ago when Perez Hilton made headlines for sharing a photo of himself bathing with his kid. He was called out for child abuse, accused of being a child molester, and it was insinuated that his child would grow up gay. I was shocked by the outrage over this sweet photo. Until I remembered back in 2013 when I posted an instagram photo of my husband showering with our then-baby boy. The baby laid gently on his shoulder, half asleep, as the water sprayed them both gently. My husband hugged him, covering his cute little butt, and nothing untoward was shown. However, the photo was reported and instagram removed it. I was shocked and saddened. So when Perez Hilton was demonized for a natural parent/child moment, I couldn’t really be too surprised.

The Washington Post published an article later that year by a mom who insisted it was perfectly normal to bathe with your children. She discussed body shame, desexualizing nudity and more. Once again, many of the comments were in disagreement, trying to shame her for nudity and seeing something wrong with bathing with children.

PopSugar Moms published an article last year entitled Showering With Your Child: When You Should Stop. Instead of offering an actual recommendation, they simply offered four viewpoints and left it up to the reader. However, I do agree with them that there WILL eventually come a point when it is no longer appropriate to bathe with kids. If I was to become uncomfortable, or my kids didn’t want to do it, then there would be an immediate cessation. But right now, I can’t take a bath without my kids running into the bathroom and begging to join in. As annoying as it can sometimes be, I cherish the fact that they want to be with me.

Being totally honest, it’s really rather rare that I actually allow them to come into the tub with me. Generally, I prefer the alone time. I send them back out of the room and yell at Mark to entertain them so I can have my short respite. And in actuality, I can count on one hand the amount of times we have EVER bathed together with all of us in the tub. In fact, I think the grand total is 2, including today. It’s just not something we really do. But it happened today, and we captured a photo, and I was pretty tickled about it.

But now… now I hesitate. The photo is totally innocent. Smiling faces with bodies hidden by a foamy layer of bubbles. There is nothing obscene or untoward about the photo itself. But the underlying message behind it will be “they are all naked together.” Some people can’t help but sexualize that. And I kind of understand. It’s hard for some folks to separate. There are some who won’t breastfeed for the same reason. Modesty is ingrained in some people, and that is fine. They can look away – choose to avert their eyes. But my goal in sharing it is to normalize the idea. It is okay to bathe with your children. Nudity is not equivalent to sensuality. And basically… if you don’t want to do it, don’t. If you don’t want to look at it, don’t. If you feel like it’s your duty to say something condemning… don’t.

We all come into this world naked, and we are completely innocent, after all.

Can A Vagina Fall Off? And Other Things I Googled During My Bikini Wax
← Read Last Post

A Day in the Life of a Virtual Assistant
Read Next Post →
Click here to cancel reply.

I couldn't believe my eyes with some of these negative comments. Disagree if you shall with the whole "bathing with your kids" (your family, your choice) but refrain from taking thing out of place and context. I can only hope the horrible comments come from either attention seekers or (i beg) people who are not parents and in no way influence any kind of children education. You go, Katie! These precious moments are few and short. Bond with your boys so they become strong balanced adults who will lead healthy happy lives and do some good. And good luck with your project!

Wow. I don't normally comment on blogs but just wanted to throw some support your way. I'm shocked at the things people are saying. Our kids and 6, 4, and 2 and I shower with them. Sometimes it's just quicker and easier. And I have boys and a girl. Of course they know that boys have a penis and girls have a vagina.....as they should. This is a cute photo. People are truly insane. It's one thing to not feel comfortable bathing with your kids yourself, it's another to lash out and accuse you of being a child molester and saying your kids will be rapists. Utterly ridiculous. Bodies are bodies. Those same people making inane comments probably have no issue with scantily clad Victoria's Secret models but yet want to turn something sweet and innocent into something it's not. They're the sick ones.

You are clearly a child molester too

You are one sick ticket lady. Don't try and normalize child molestation!

Gag me! I have only two words for you! VERY WRONG!