Back in June of this year, I had the pleasure of attending the BlogHer 2017 conference in Orlando. It was my second year attending, and I knew that I would be exposed to some amazing experiences. While it is full of inspiring stories, incredible women from all industries and a ton of learning, what I most look forward to in attending these conferences is the amazing Boss Babes I always meet. Women who are going out and taking the world by storm with incredible new products, services and ideas to change things for the better.

I attended the conference with my friend, Danielle from Single Mom Memoirs. She’s a mom of five incredibly smart kids and is one of the most hands-on mamas I know. As we were walking along out of the expo hall and heading back to our hotel room, I noticed a lady at the registration desk wearing some eye-catching (and very comfy looking!) pants. I couldn’t stop myself from commenting on them, telling her how cute they were. She immediately spun around to show me that they weren’t your average, ordinary trousers. They were actually printed with the patent information of her brand new product – Polyblox Totems. 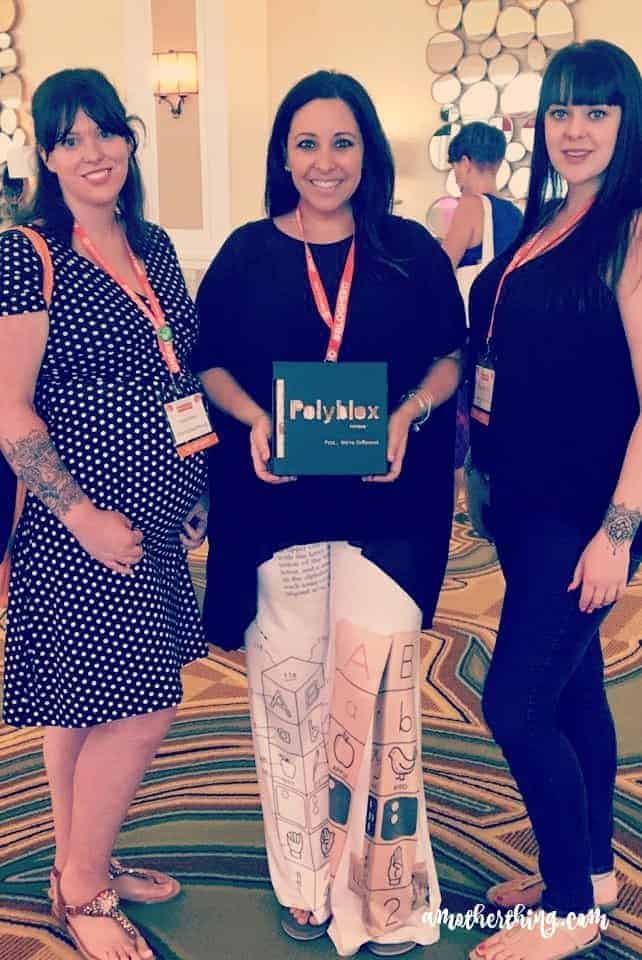 I think Danielle and I were both rather intrigued. We got closer to see that our new friend Carolyn was holding a box of wooden sticks with various letters and pictures imprinted on them. They matched what I was seeing on her pants, and I suddenly understood.

Carolyn enthusiastically explained to us that she and her business partner were bringing to market an incredibly cool new toy that would revolutionize early childhood learning. They were based on the old school wooden blocks that kids have been playing with for decades, but they were way more streamlined and versatile. 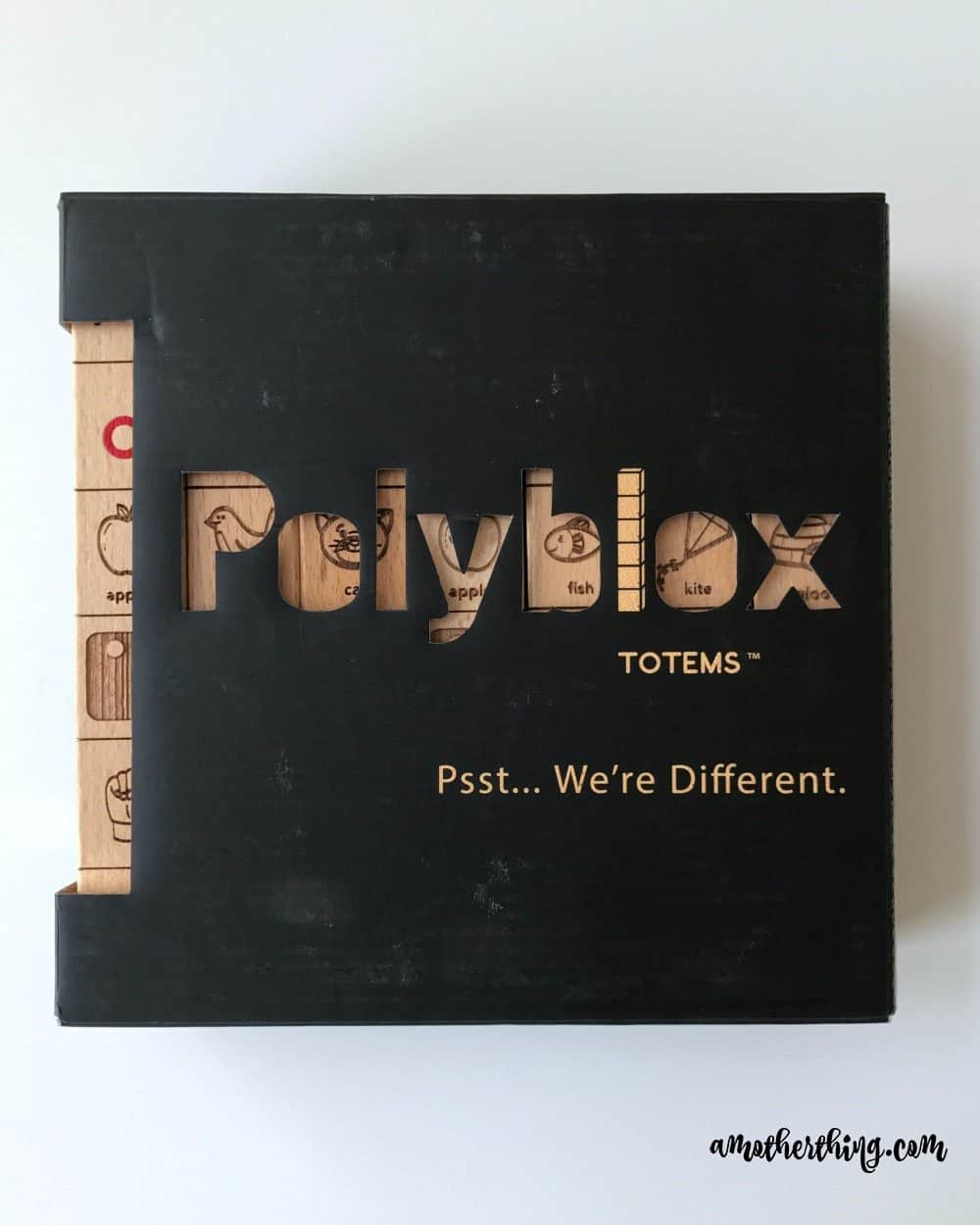 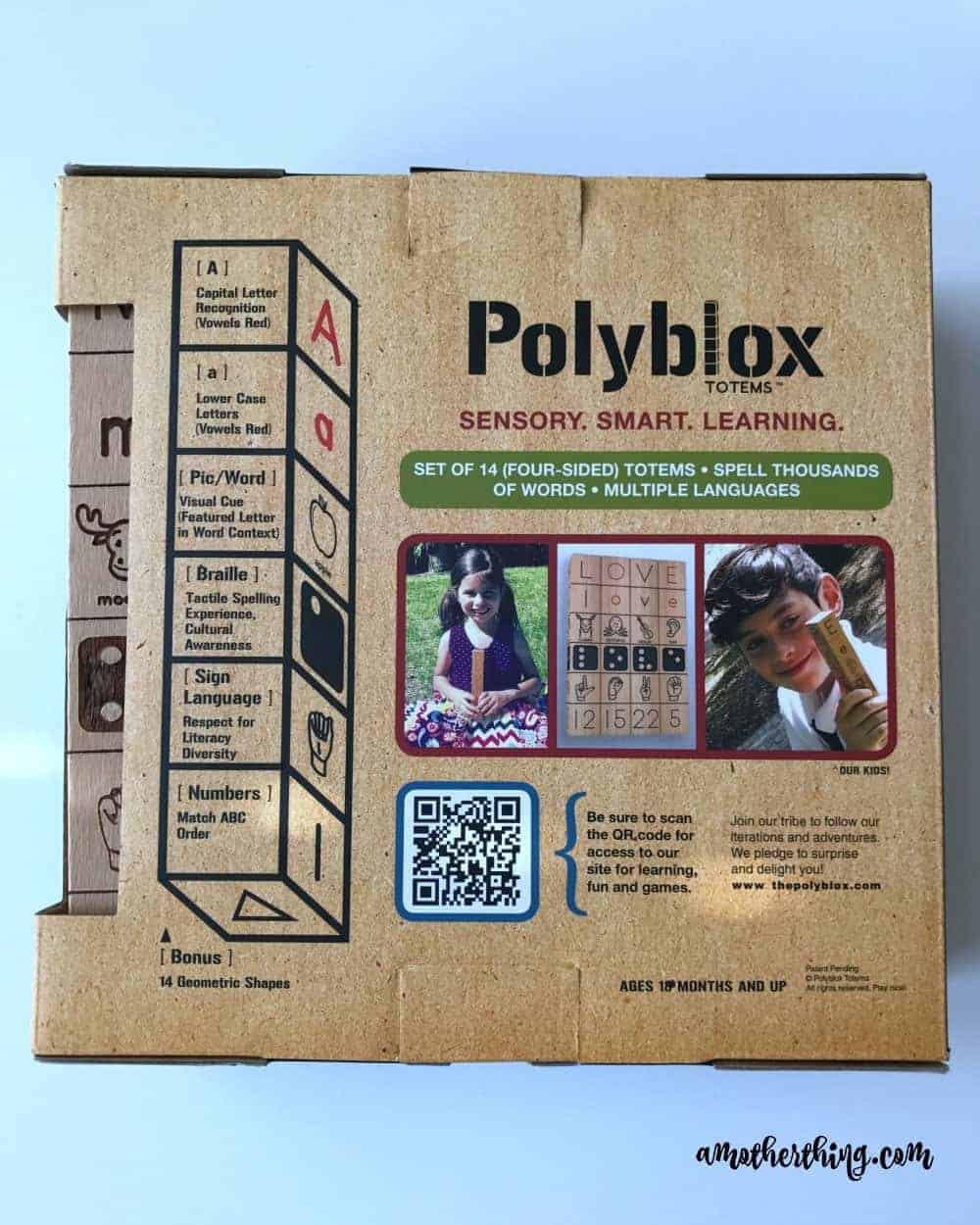 She briefly took us through the totems and how they worked. There are fourteen four-sided totems in each pack, covering the entire English alphabet, allowing kids to spell thousands of words. Each totem includes on each of its four sides a capital letter, lowercase letter, a pictograph of a word starting with that letter, the letter in both braille and sign language, and a number corresponding to where the letter sits in the the alphabet.

As a bonus, the bottom of each totem includes a different geometric shape so that children can learn the names of them. In addition, the vowel letters are all in red to make them stand out from the consonants. 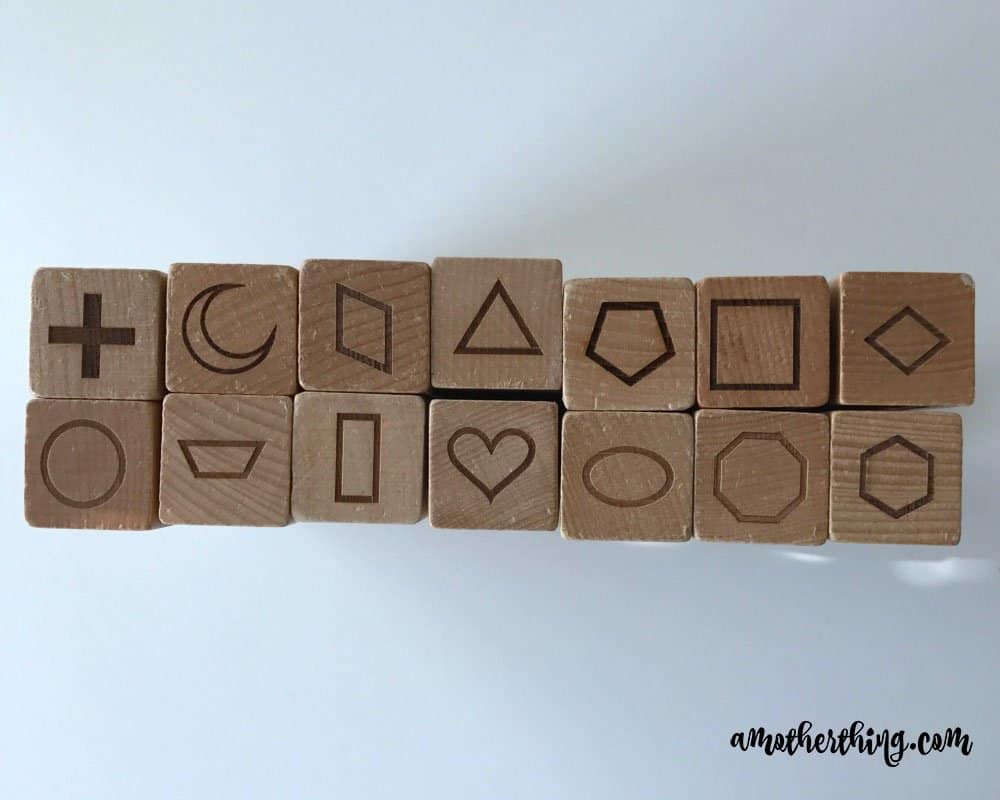 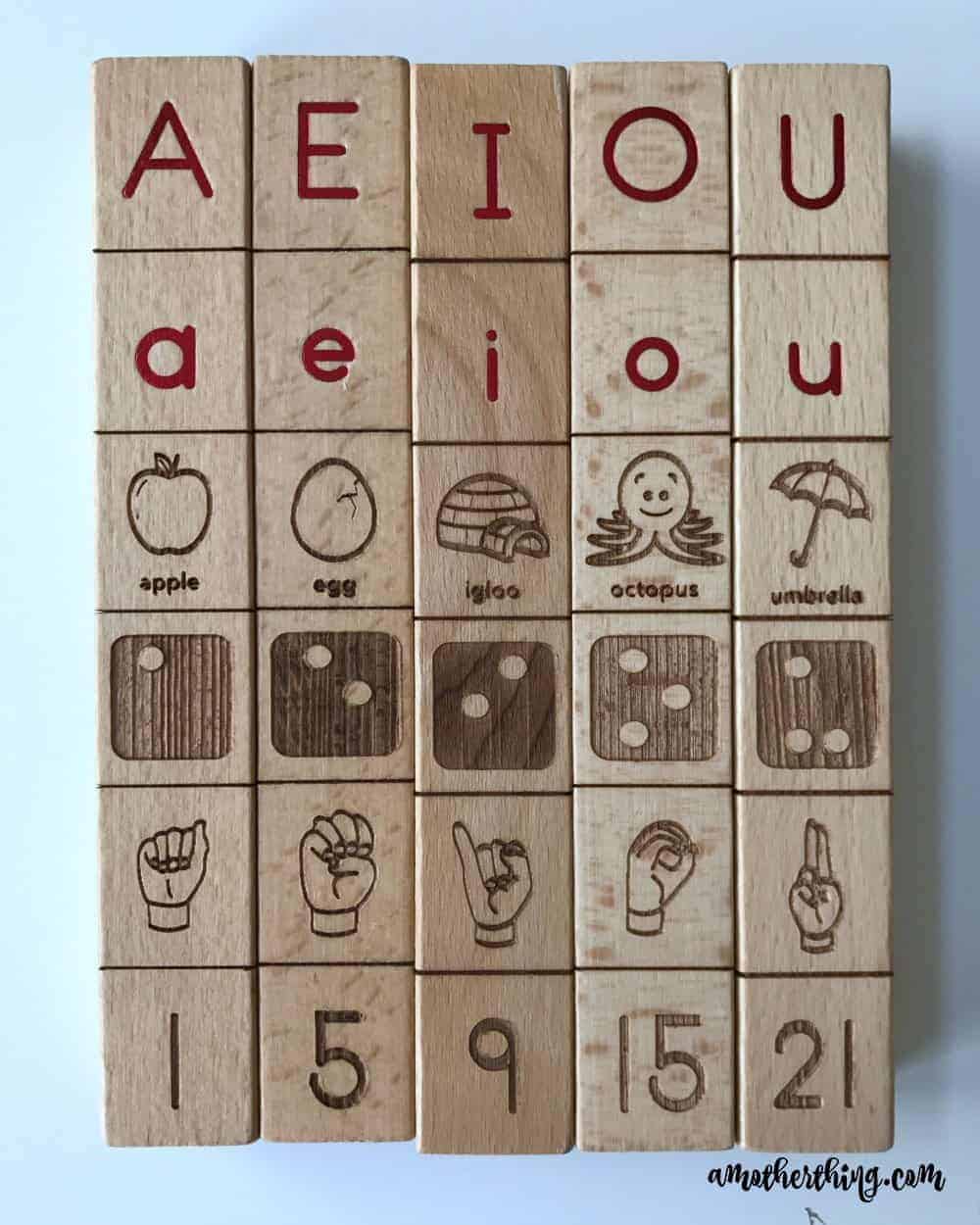 As you can imagine, both Danielle and I were very enthusiastic. I immediately asked Carolyn if she works with bloggers, but since they were so new to the market, it wasn’t a part of their marketing plan as yet. I told her how much I’d love to have a set and spread the word because I just KNEW these totems were going to be huge. She was very accommodating, and a few weeks later, I had my very own set of Polyblox Totems to use with my kids.

For those unaware, I am currently pregnant with my fourth son, but my three other boys range in age from 3 – 6. My oldest son, Dexter, is in first grade, and he has some developmental and speech delays that make reading and speaking difficult. My second son, Daniel, is four years old, and he’s in his second year of preschool. He loves it and is absolutely thriving. He has been working on early reading skills, and he’s getting good at sounding out words on his own. My third son, Chester, is three this month, and he’s small for his age and has been late to hit his milestones. But lately he has been going full force in catching up. These Polyblox Totems seemed like a PERFECT way to get each of my kids individual help in their various reading skills. 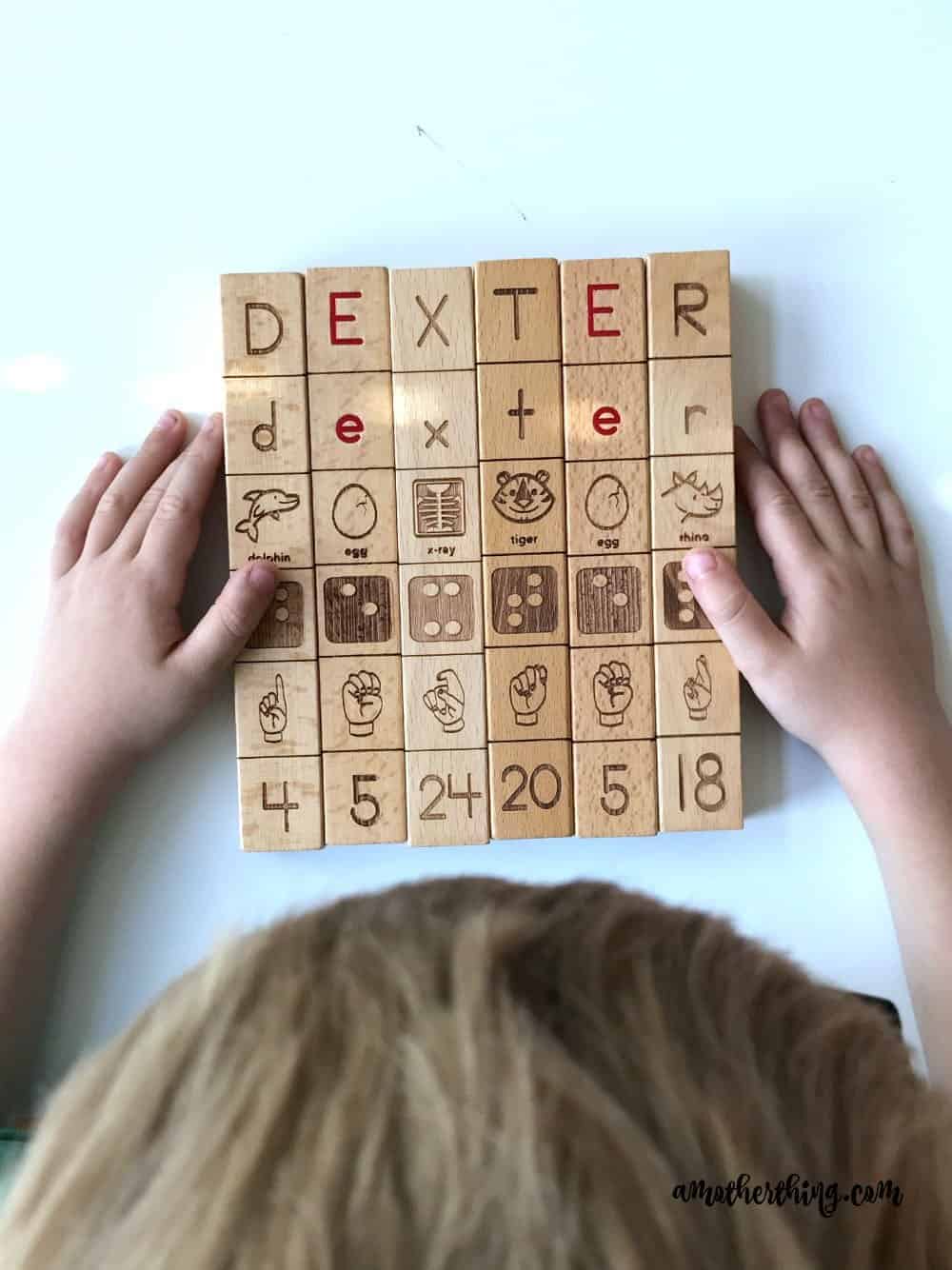 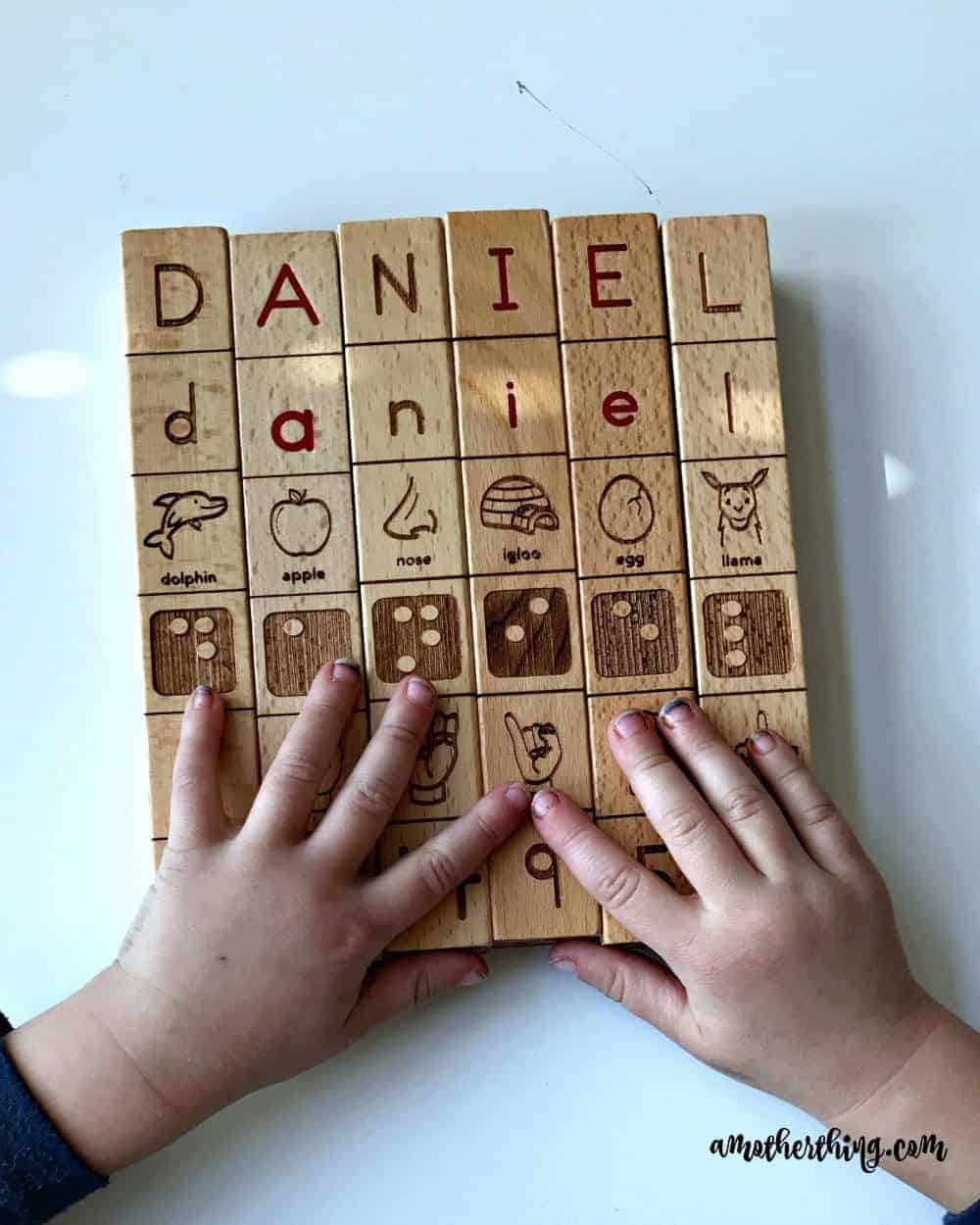 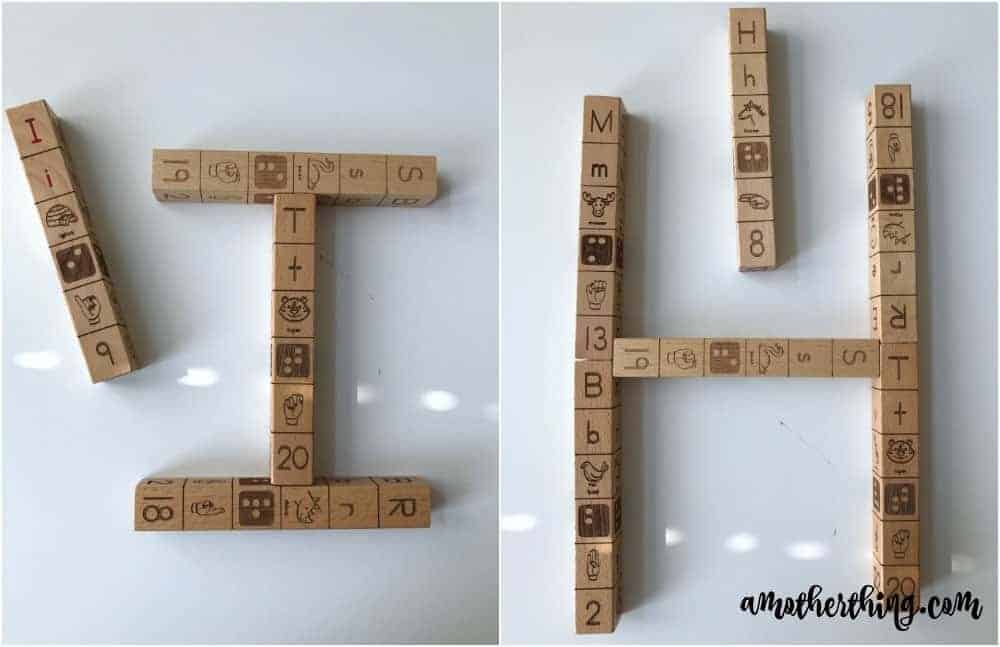 I wanted first to let them play with the totems in their own ways. I think it’s important to let kids lead the way with their learning and education, and in truth, I wanted to see what they’d do. The first thing they did was to spell out their own names, which was pretty cute. Then, they began to arrange the blocks into standalone letters.

At first they were confused about the braille and sign language, not knowing exactly what they represented. Dexter has dealt with hearing loss all his life, so he has been exposed to sign language more than Daniel has, and he recognized the signs right away, getting very excited by them. We talked about blindness and deafness and how braille and sign language were languages that would allow them to “speak” with others who had these issues. We took turns placing fingers over the letters on the block and trying to learn the feel of each one.

Of course, every kid with a wooden block is going to want to use them to build. The boys took turns stacking the blocks in various ways to engineer buildings and towers. 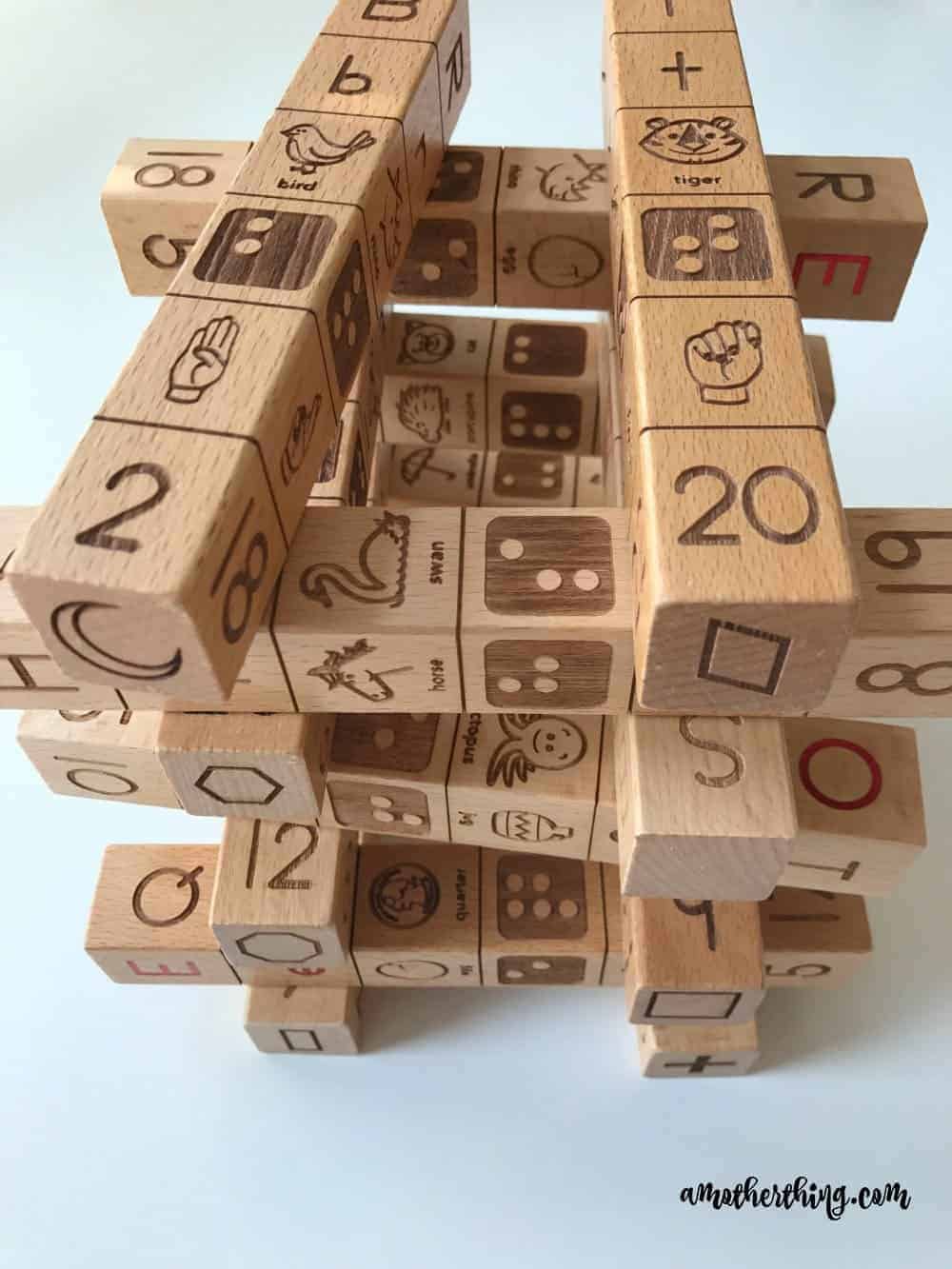 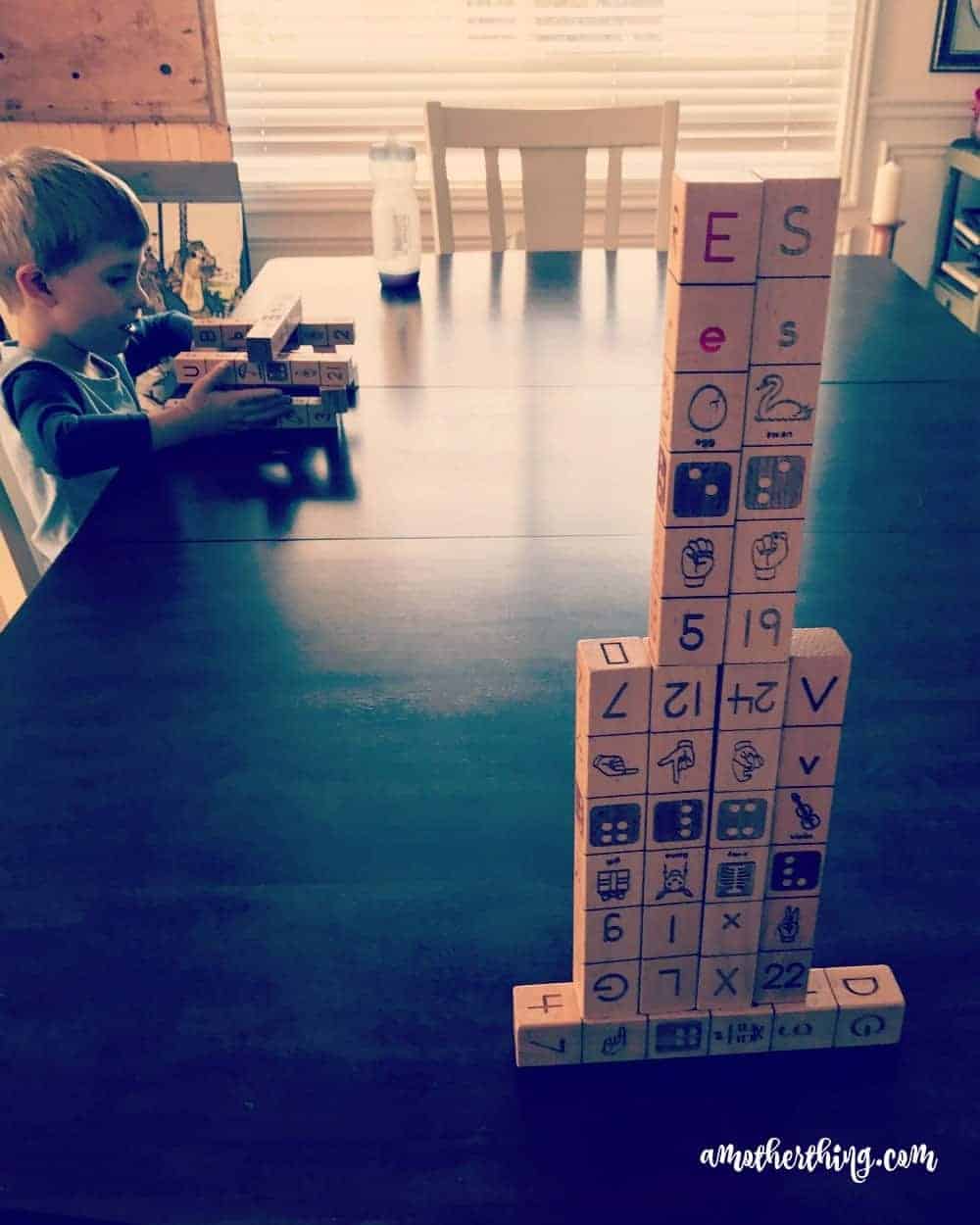 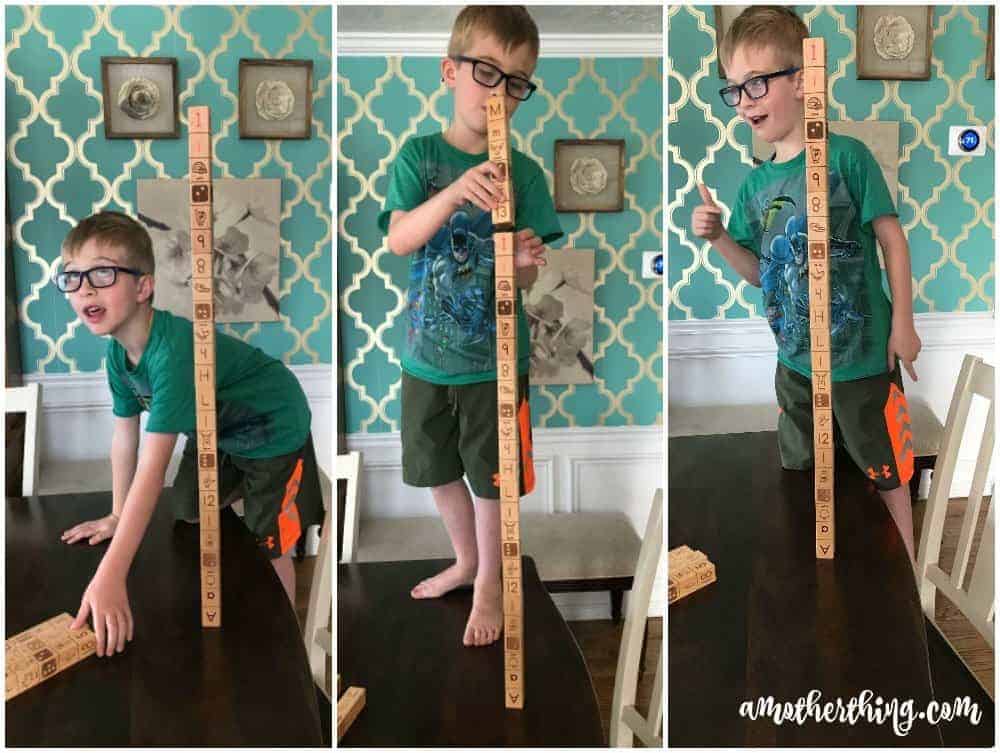 Dexter, who has shown a great aptitude for math this year was playing with the numbers so he could add them together. He immediately understood the correlation of the number to the letter’s place in the alphabet, and so he starting trying out basic algebra by forming equations like B + E = G. I was really impressed!

He also started trying to spell out short 3 and 4 letter words to practice for his spelling test. 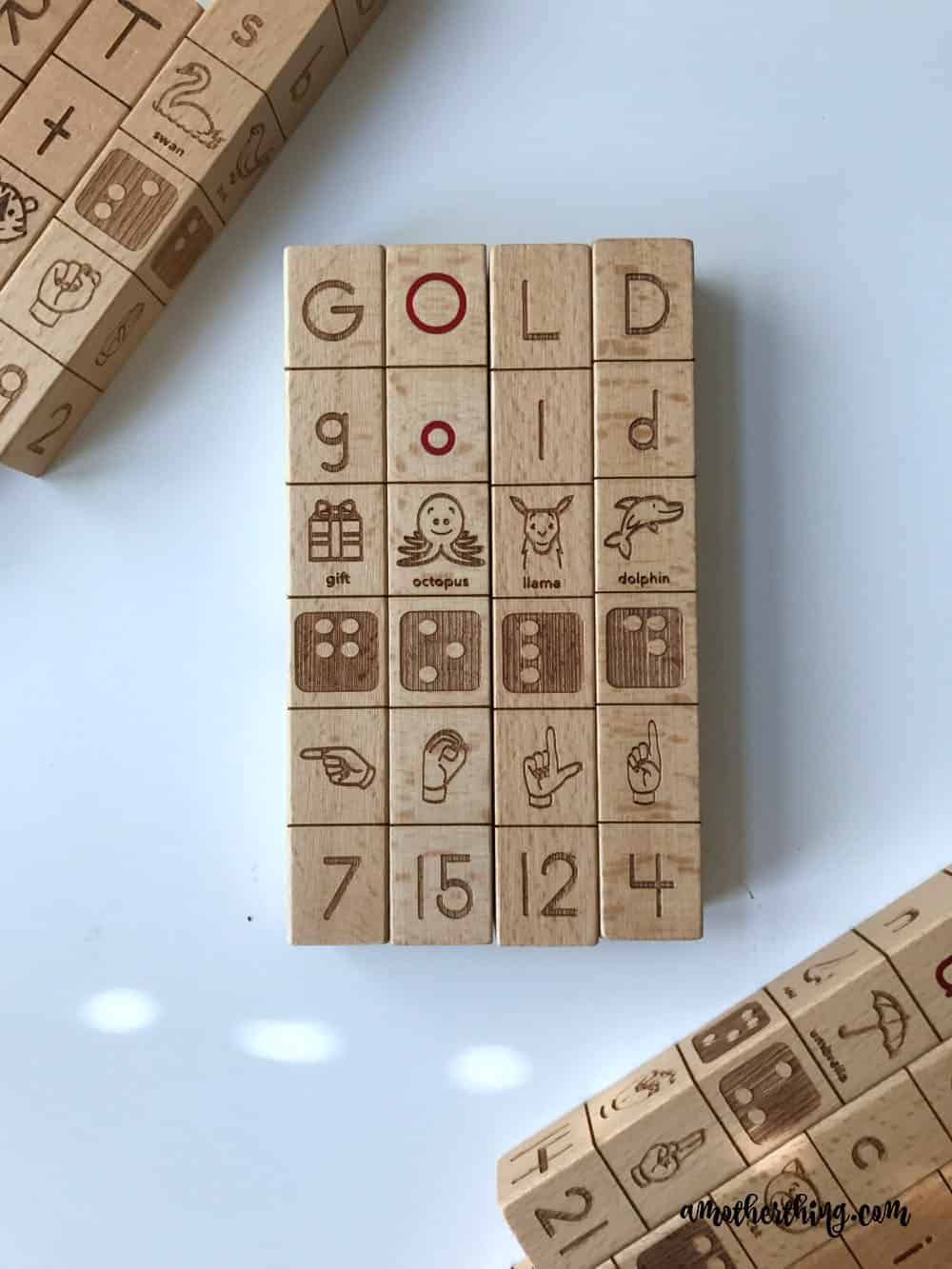 He loved that vowels were a different color, and he was really glad to practice them and show off his abilities to identify them.

The two older boys had a blast playing with the blocks, and they have become part of our daily routine after school. While we still use flash cards to recognize sight words, Dexter has taken to grabbing the Polyblox Totems and spelling out the words on his own.

Obviously these are an incredible learning aid for young children (or even adults who are learning to read!), but let’s not forget that they are also a fun toy, allowing them to stretch their imaginations and build and create. Unlike original ABC Blocks, they aren’t going to get scattered around and stepped on in the night by half-asleep parents, which is a HUGE bonus. In fact, I’m surprised and elated that my kids take such good care of these blocks, putting them back in the box when they are done with them. Because there are only fourteen in a set, they don’t take up a lot of room, and the boys know that if they lose one, that’s four letters they will not be able to use anymore. They are very protective of their Polyblox. 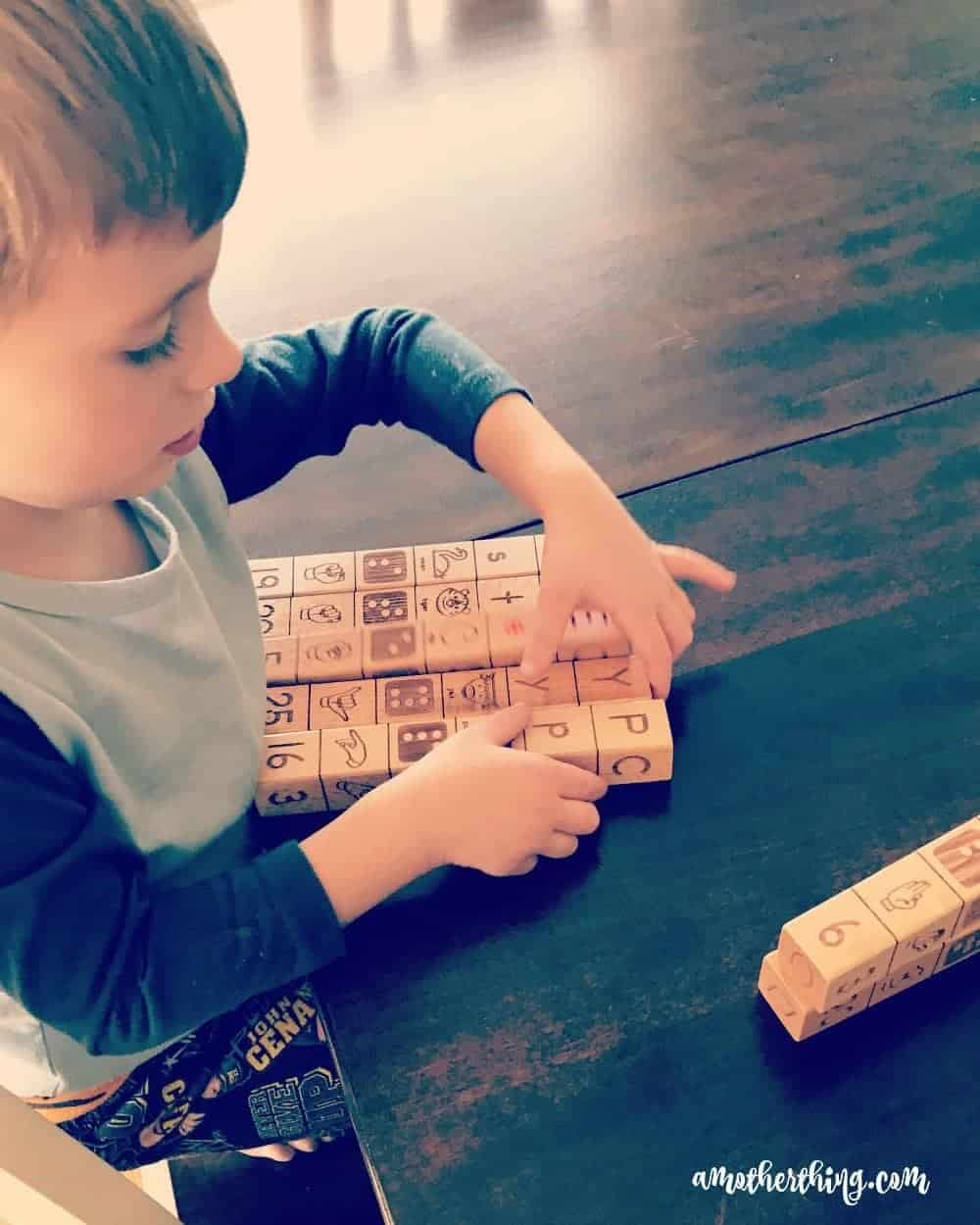 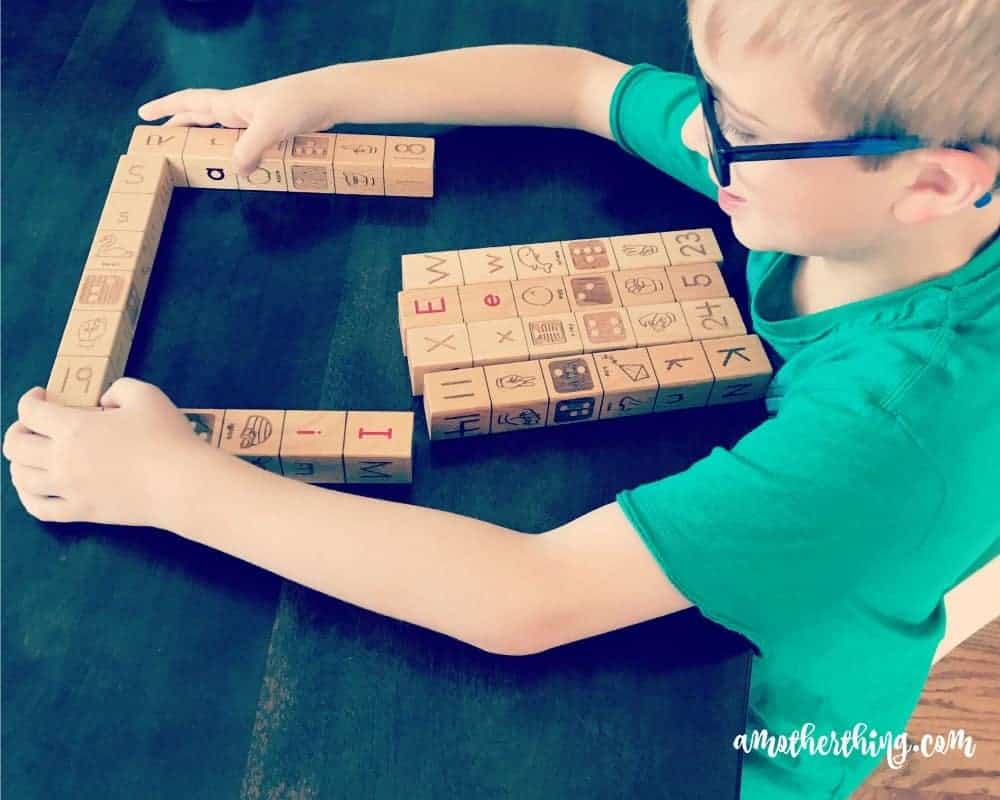 As for me, I can’t recommend them enough. I’m really impressed with the new take on an old favorite, and I think the Polyblox team has done an incredible job in creating something that really will change the world.