So if you’ve been following along with the horrible saga of Dexter’s ears, you’ll know that he had to have surgery just before Christmas. It wasn’t an ideal situation, but we needed to get it dealt with as soon as possible to be sure that no permanent damage was done.

Our doctor was Dr Sundean, and despite many attempts in-office to get a good look in his ears, she just wasn’t able to do so. So the idea was to put him to sleep, clean his ears thoroughly and then check for damage and liquid behind his eardrums and potentially insert tubes. So really, we weren’t sure what they’d find or what would be done. For all we knew, all would be well, and we would just have a very expensive ear cleaning! Before we even could book the surgery, we had to pay $489 out of pocket. There will be more later.

Anyway, we had to be at the Heart of Florida Hospital Day Surgery Center at 5:30 AM. We were given specific instructions about bathing him the night before. We were told he could come in his pajamas and bring his favorite toy. No food or drink after midnight.

We followed it all to the letter and we were there at 5:30 on the dot. 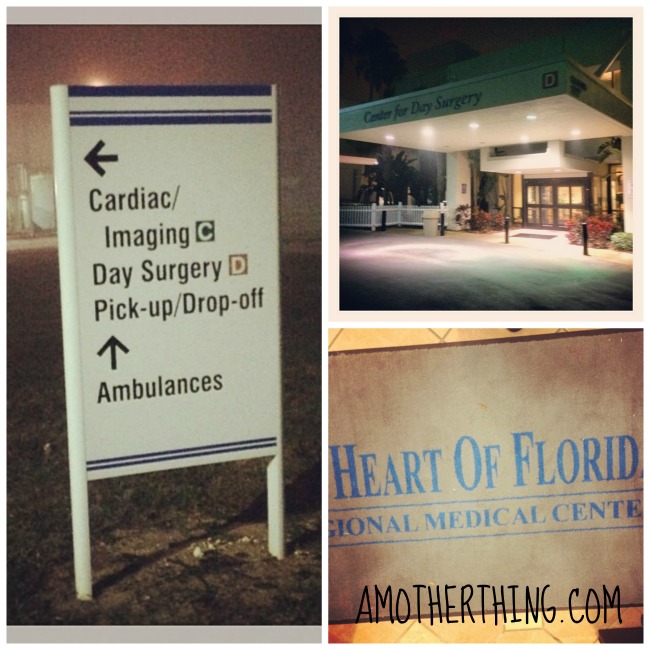 Once inside, we signed in and were told to sit around and wait. Dexter was quite antsy, so I took the opportunity to walk around with him a bit, showing him various bits in the waiting room and taking him to the bathroom when he needed it. Eventually, he found his favorite Teddy Bear that we’d brought, and he was very excited to play.

Eventually I was called over to sign papers and talk to the admissions lady about what to expect. We had to put a hospital bracelet on Dexter, but he was in NO mood for it. He fought and kicked and screamed his head off, refusing to let me put it on. Mark had to help hold him while I forced it on, and it kind of set the stage for what to expect of the day. After only a few more minutes, we were sent through to the main surgery area. 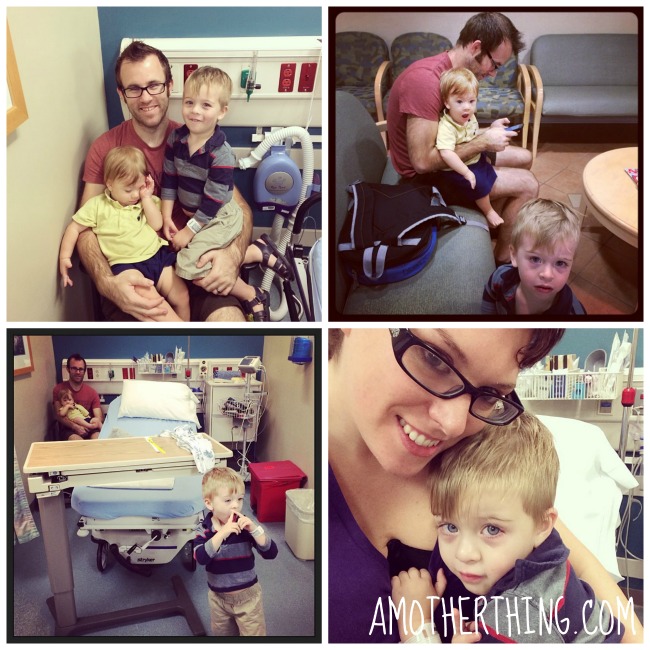 We were led to a small cubicle with a bed in it, and we settled in for what turned out to be a fairly long wait. For the most part, Dexter was quite happy to just hang out, walking around and looking at all the wires and knobs. Whenever a nurse or other professional approached, he immediately climbed up in my lap and held on tight, obviously very frightened.

More paperwork had to be done, and we were given further instructions about what was going to happen. Just had to wait for the doctor to get there.

We were told that he would have to put on the tiny hospital gown eventually, but the nurse (sensing his agitation) suggested we wait until the last minute.

Knowing that there was every chance of a massive fit if we tried to put it on him, I got him to help me by putting the gown on his teddy bear. He loved it! When a nurse saw us doing it, she ran and grabbed a little hat and mask for the bear, too. 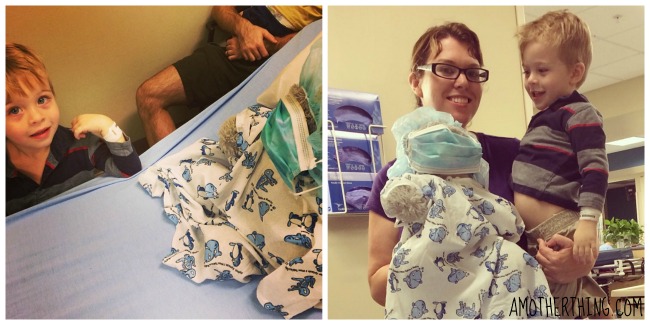 It was super cute.

Eventually, one of the doctors assisting with the surgery came over to take Dexter’s vitals and try and bond with him a little. He wasn’t having it. Whenever she tried to touch him, he screamed or kicked or grabbed onto Mark tightly. She was very gentle and kind to him, and he calmed down a little bit, but he just wouldn’t let her do what she needed to do. She said it was fine and they’d do it later. 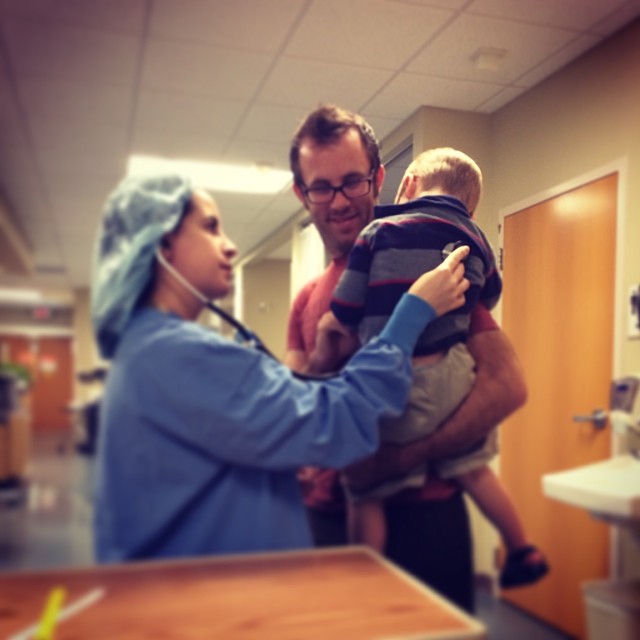 Afterward, he once again climbed in my lap and cuddled me tight. 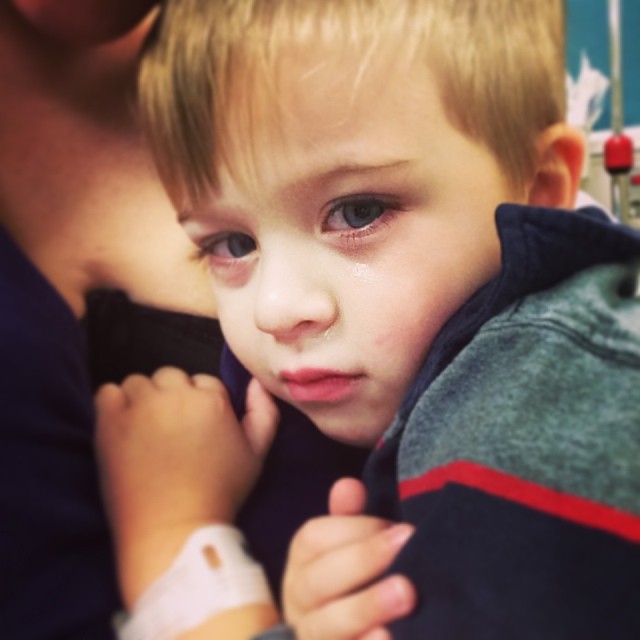 I think all of the staff realized very quickly that Dexter was an obstinate little so-and-so. For sure our doctor was aware having seen first-hand how many people it took to hold him down in her office.  In the end, they didn’t even make us put a gown on him.

In the most heart-wrenching moment of my life, I was forced to hand over my son to one of the doctors. He looked petrified, and while he didn’t kick or thrash as I thought he would, he did scream and cry and beg me to hold him. I kept a smile on my face, and I waved as if this was all okay. Inside, I felt like I was dying. 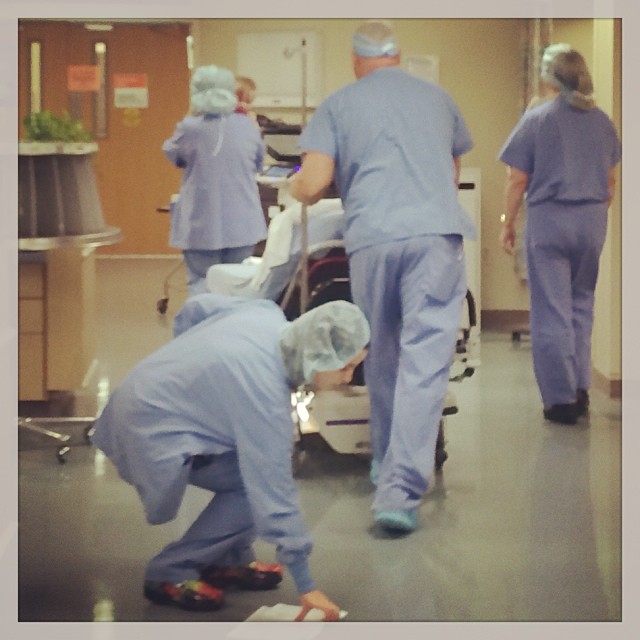 The rest of the staff followed behind with his bed and Teddy Bear. We settled in to wait.

The doctor had told us it was a very quick procedure, and the nurse had quantified that by saying it usually took about 5 or 10 minutes. We were told that after it was done, they’d take him to recovery until he woke up, and then they’d bring him to us. 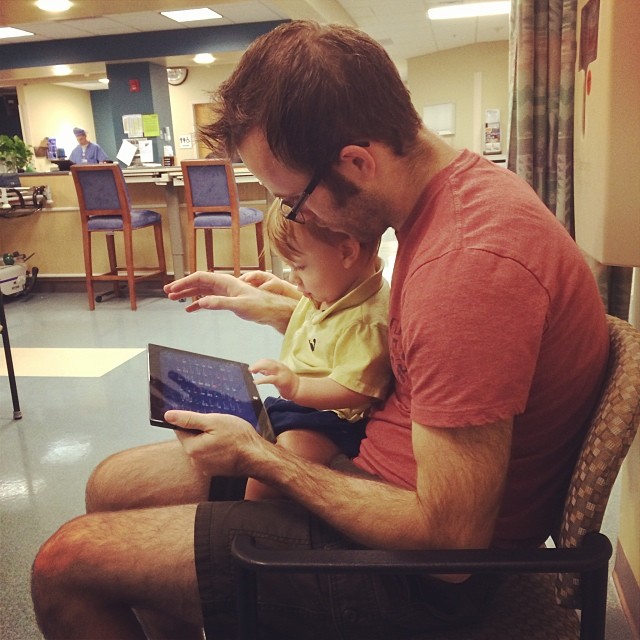 I stared at the clock, waiting. And willing. And knowing everything would be okay, but worrying all the same. Ten minutes passed. And twenty. And thirty. Even assuming it took them several minutes to get him changed into his hospital gown and put under anesthetic, it felt like they should be done by now. Forty minutes passed. Forty-five.

Finally, I saw a door open in the hall, and my son, on his bed, was wheeled across to the recovery room. His doctor followed behind him, and before disappearing into the room, she looked across at me and gave me a thumbs up.

After a few minutes, she came out and said that she was amazed. She said he never would have let her clean his ears in her office. The volume of wax she pulled out was FAR more than expected. It was highly impacted and so full that she felt it was definitely affecting his hearing. After it was cleaned, she had checked for fluid and found tons.

She said that they’d placed the tubes in each ear. In the right ear they found a lot of clear liquid. But in the left, it was full of thick, yellowish green liquid which had clearly been there for quite a while. She said that there was no way sound was penetrating properly through all of that.

We were advised that we should see a very quick and marked improvement in his hearing, and eventually his speech.

After a bit, they finally wheeled him out to us. And the first thing I noticed was that he was still fully dressed and even wearing one of his shoes! The nurse said he was the first patient in her memory that had surgery fully clothed.

Both of his ears had cotton in them, and we were given drops that we were to insert in his ears twice a day. The doctor stressed how important this was for his ears to heal. I think she knew just how difficult that was going to be.

We had to stay for another forty-five minutes until he’d recovered well enough, and then I carried him out to the car. On the drive home, the poor boy started vomiting all over himself. It can happen after being put under general anesthetic, but it was no fun.

After dropping Daniel off to daycare, we drove to Starbucks and bought Dex a kids hot chocolate. He didn’t drink much, but I think he appreciated it.

It’s been a struggle getting the drops in his ears morning and night, but we’ve managed it. He’s had a LOT of discharge out of both of them. At first it was pink-tinged, but eventually it was just yellowy-green. It’s now been almost a week, and it seems to be a lot better. The drops are finished, and we are hoping that his ears are healing properly.

The good news is that the doctor says there is no real damage inside, and other than the tubes, she doesn’t foresee any further treatment.  So we are very grateful.

Come the end of January, we will be back at the audiologist to re-test his hearing, and hopefully we will have good news.

Next
The No Poo Project
Click here to cancel reply.