Well we’ve made it this far, and we’re still kickin’! Especially baby Felix who has taken on the personality of a violent footballer. Or maybe a Radio City Rockette? Either way, he’s going strong, making his presence known at every opportunity.

This is week 23, which means I’m at the beginning of Month 6 on the charts. SIX MONTHS?! How did that happen?!

Want to see what a six month bump looks like? Of course you do! Why else are you here?? 😉 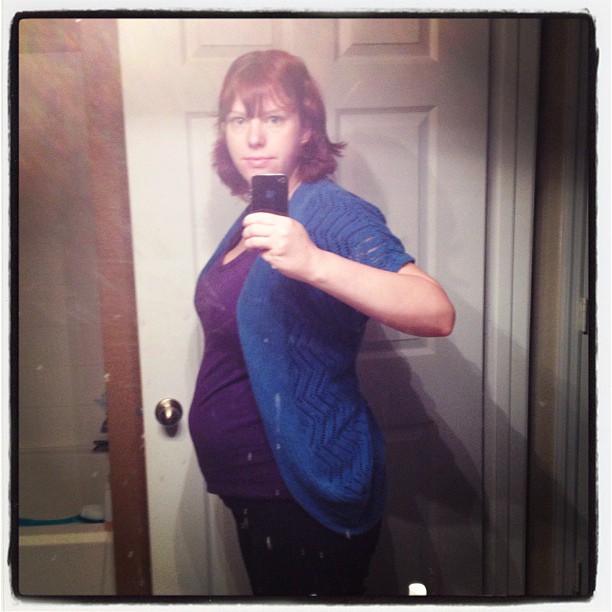 According to my handy dandy What to Expect guide, right now my uterus is about 1 1/2 inches above my belly button and it’s the size of a basketball. I’ll admit that I feel like I’m carrying a giant basketball inside of me, though I’m disappointed in the lack of ROUNDNESS to my belly. It’s still more of a B shape, and when I sit down, it sort of collapses in on itself so that you can’t even tell I’m pregnant and not just fat.

I’m getting a lot of achiness in my lower abdomen lately, which I’m sure is due to stretching ligaments. I have a lot of headaches and dizziness, and the dreaded fainting spells have come back to haunt me. Mark was just commenting that I’ve fainted at least four times this week. It happened at Target the other day, which was highly embarrassing, I’ll admit. I was alone and some nice strangers had to sort me out. D’oh!

I’ve got a very very itchy abdomen, which comes from the skin stretching out, and my linea negra (that dark line that goes down the belly during pregnancy) has started to show itself. My stretch marks haven’t yet gotten any worse, though I’m sure they’ll be showing up soon to make me feel that much more hideous.

In good news, it seems that this is the point in pregnancy when your hair starts growing super fast, and I know that was true last time. So hopefully this time around I will make the most of the growing cycle and end up with luscious locks by the time the baby arrives. In my last pregnancy, I had stupidly stopped taking prenatal vitamins around 5 months, but this time I’ve been vigilant and have taken them every single day since I got pregnant (a record for me!).

The only other news this week is that we have our fetal echocardiogram on Monday. This is due to them finding a calcification on the baby’s heart during the 20 week ultrasound. I’m a little scared, if I’m honest, but the internet has actually eased my mind a little (for once!) by showing me dozens of message boards with women worried about the same thing and it turning out to be nothing. So that’s what I’m expecting from this appointment. A big vat of “everything is okay.”

For now, I’m trying to stay calm, despite Dexter hitting his terrible 2s a few months early! I get a sort of silly pleasure when he’s being naughty and I pick him up to hold him, and suddenly baby Felix will start kicking wildly through my belly as if to punish his big brother for stressing mommy out. Ah, the little things….

Good luck with the appointment. xx

Good luck with the appointment. xx