My oldest son, Dexter, turned four years old last week.  And Dan, my crazy and rambunctious middle son turned two just a few days before that. I have no idea how it happened. They have grown so much and the last year has seen their communication grow by leaps and bounds. But as smart and adorable as they are, they are still, for as much as I love them, insufferable know-it-alls and demanding little dictators. It’s not my fault I can’t live up to their impossible standards. The kids seem to have their own sets of rules. The words that you and I know to mean one thing mean something completely different to young kids. So for my own peace of mind, and to help standardize our communications, I’ve collected the top 10 words that mean something completely different to a toddler.

The actual definition is the day preceding this day, but to a toddler, it is not a fixed point in time. Instead, it is any in a range of days that came before this one. Quite confusing when they’re asking about something that happened over a year ago. 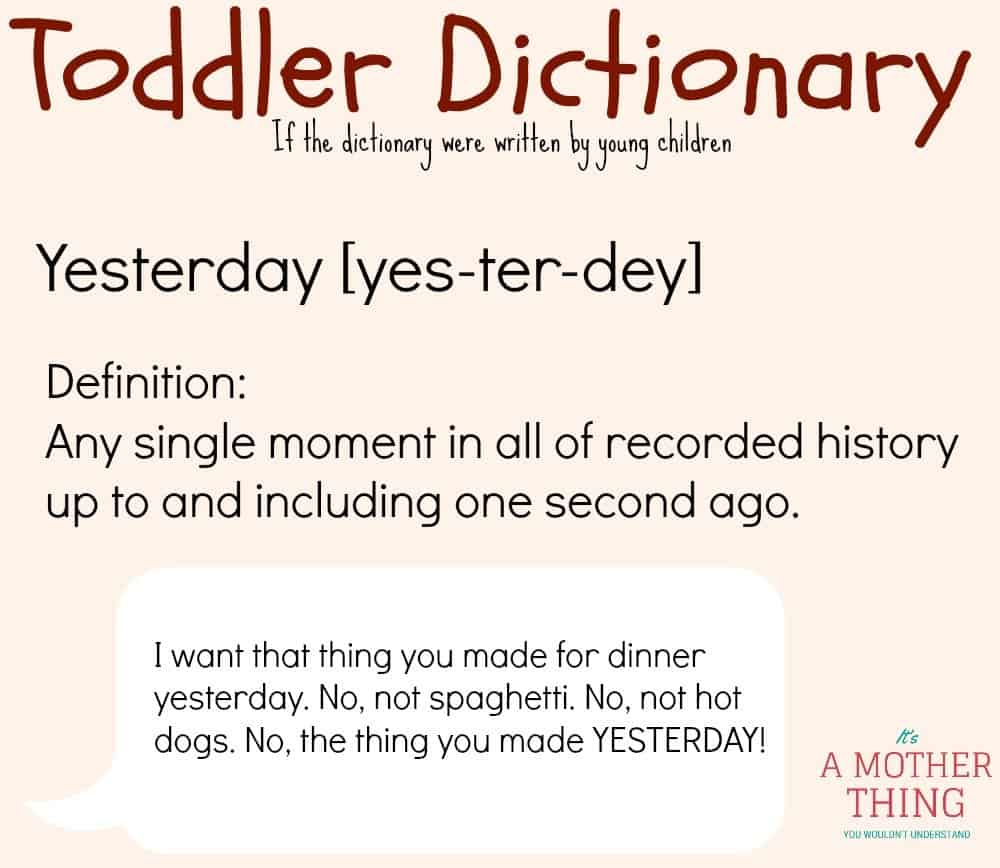 We know that this word means the day following today. But to a kid, tomorrow is as open a possibility as you’ve ever known. 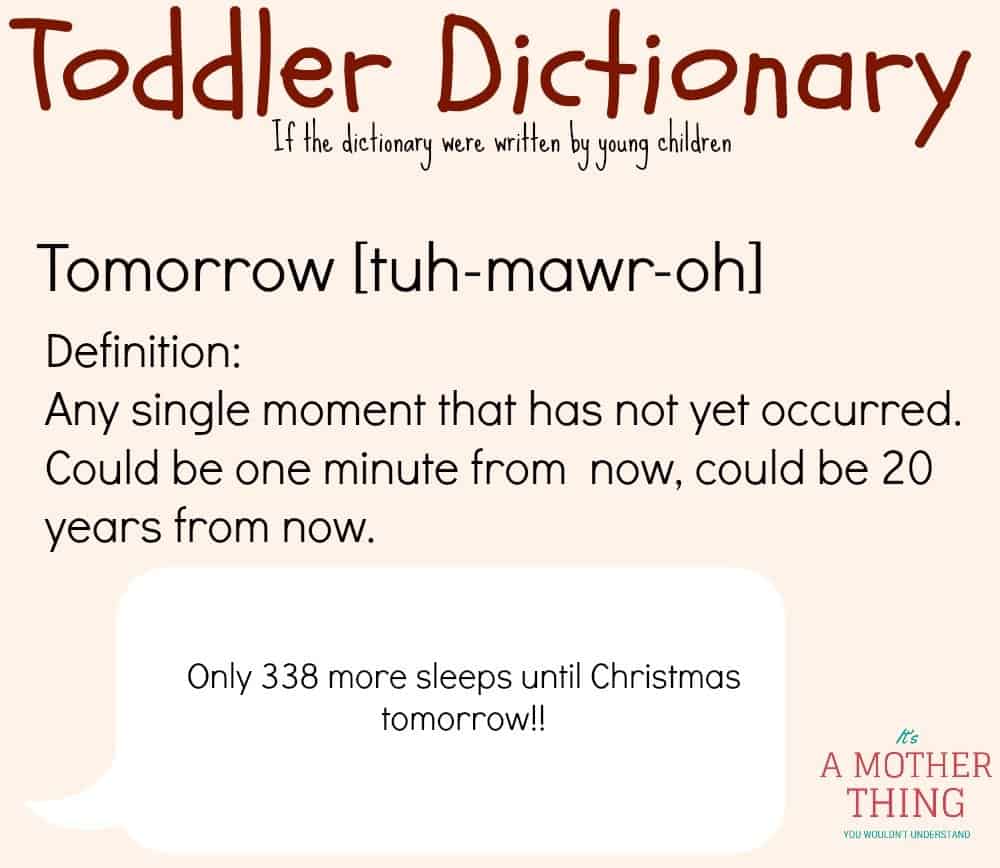 This is an easy one. You would think… It simply means “this present day.” But my kids seem to think that it has its limits. No 24 hour window for you, mom! 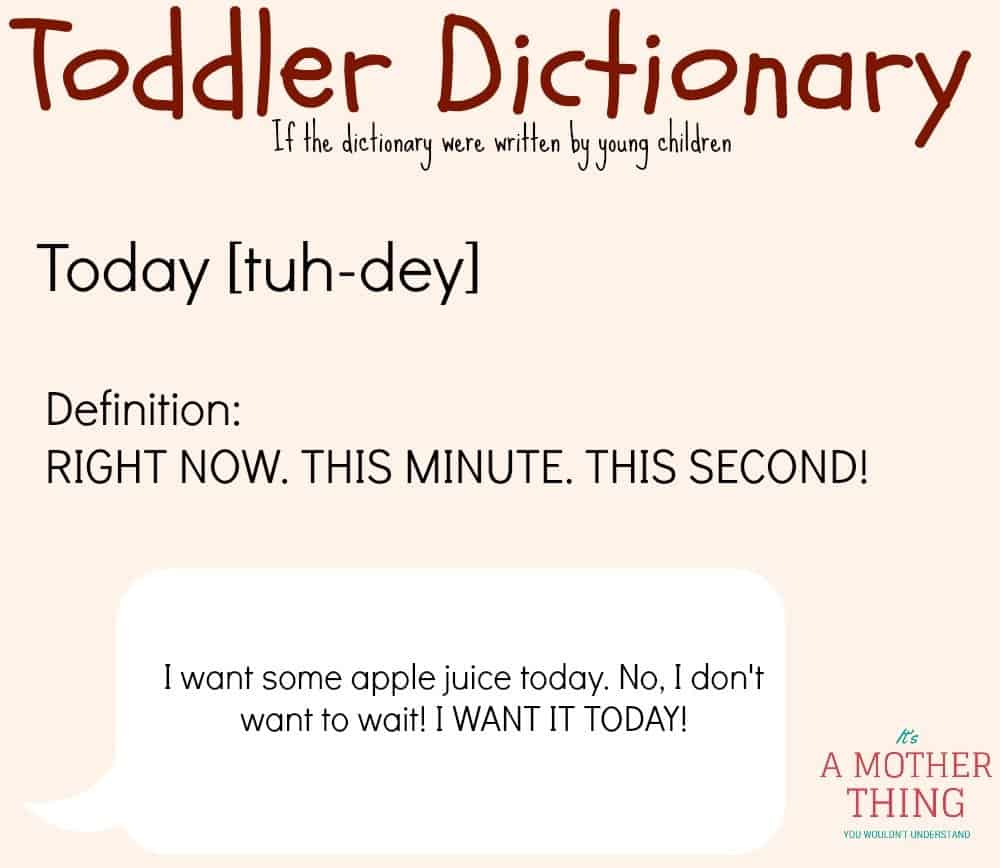 The main meal of the day, usually eaten in the evening. Some adults even use it to refer to the mid day meal, which is fine. But if you’re a four year old, dinner is an actual food, and no matter what it is, you don’t like it. 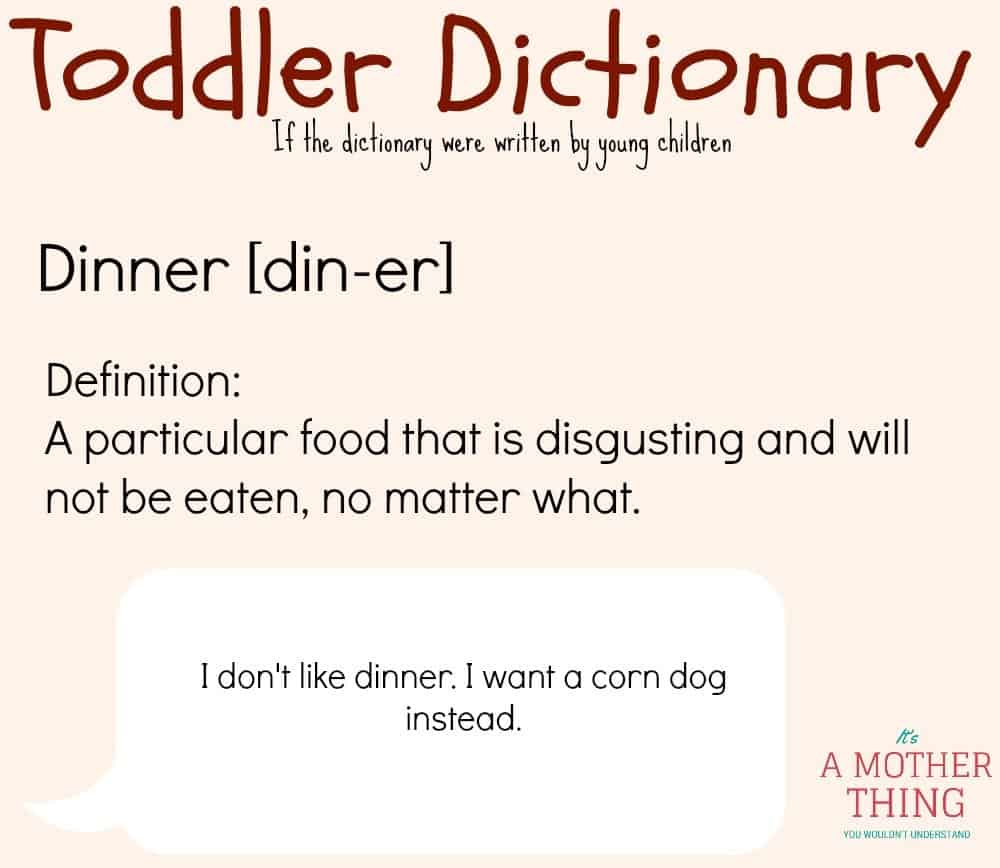 Ah, this is my favorite. Trying to teach a kid the necessity of waiting to eat candy and ice cream until AFTER they’ve eaten real food.  Explaining that a treat is anything that affords particular pleasure or enjoyment. But with kids, a treat is more like a magic elixir that keeps them from acting out. And you’d better give it to them posthaste! 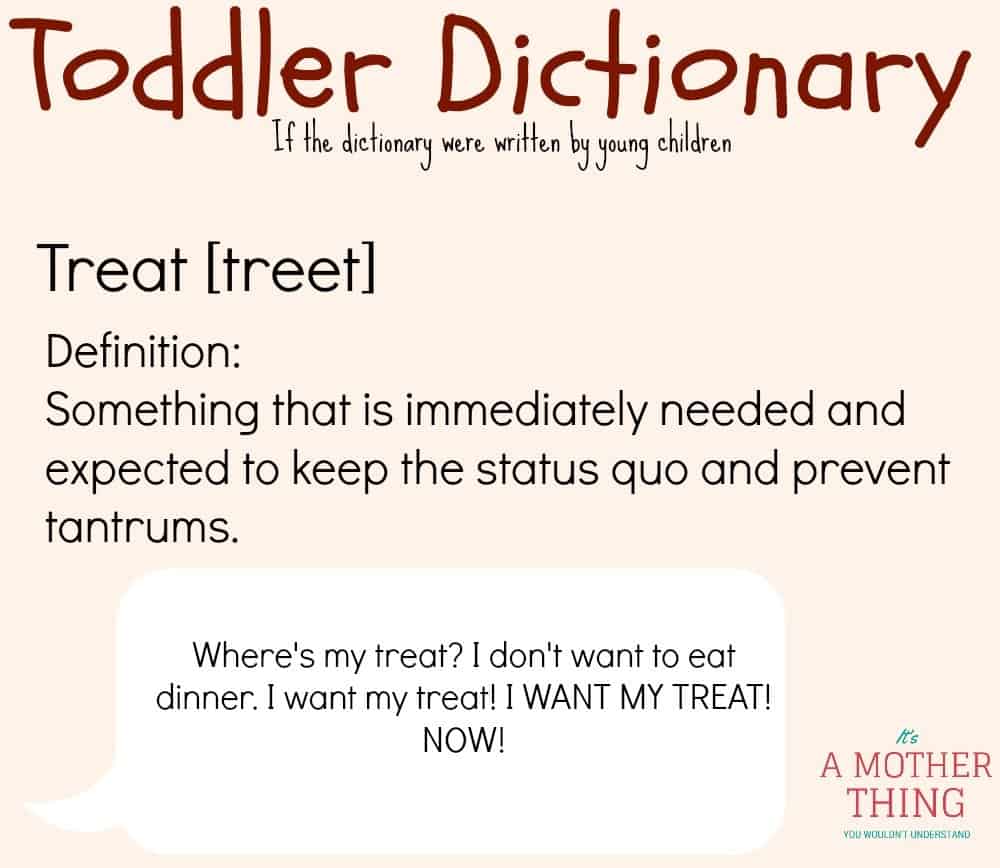 Most of us see bedtime as the set time at which a person goes to bed. If not an exact science, it tends to be pretty close to the same time every night. But every parent knows that, like all those yesterdays and tomorrows, bedtime is never set in stone. 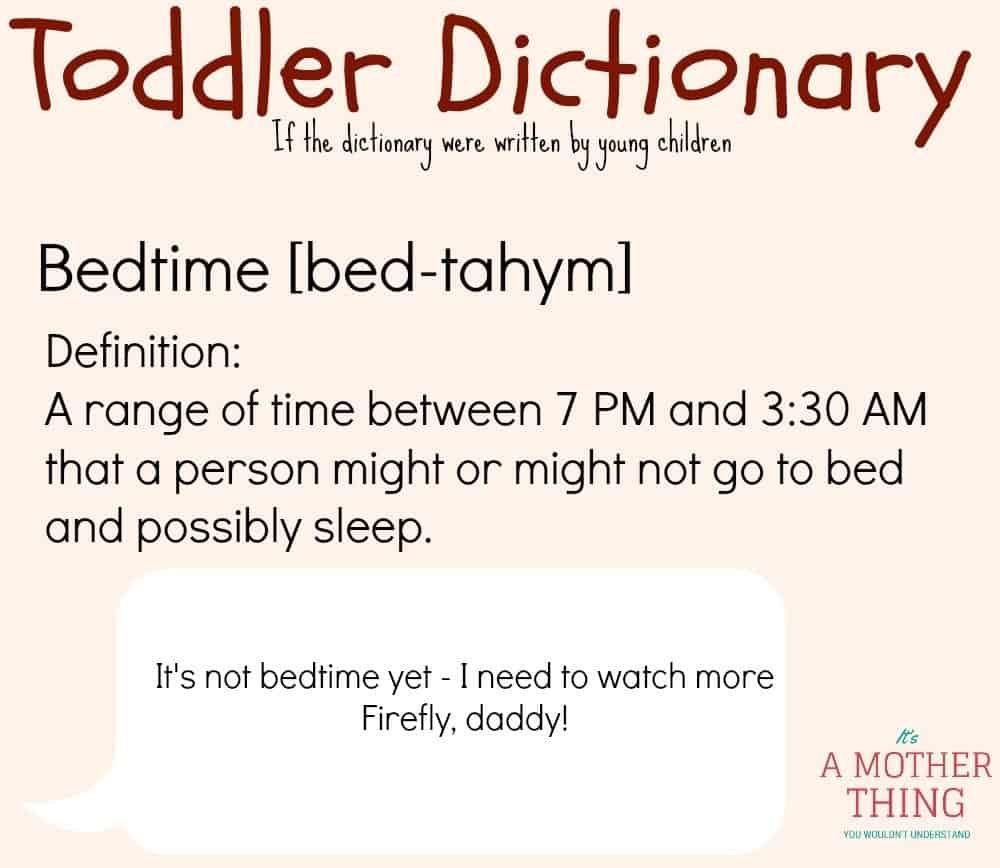 The cornerstone of life.  A transparent, tasteless liquid which we drink to survive. The single most important chemical compound that this world knows. It is in everything we eat and drink. It is everywhere. But to a toddler? Well… just try offering it and see the reaction. 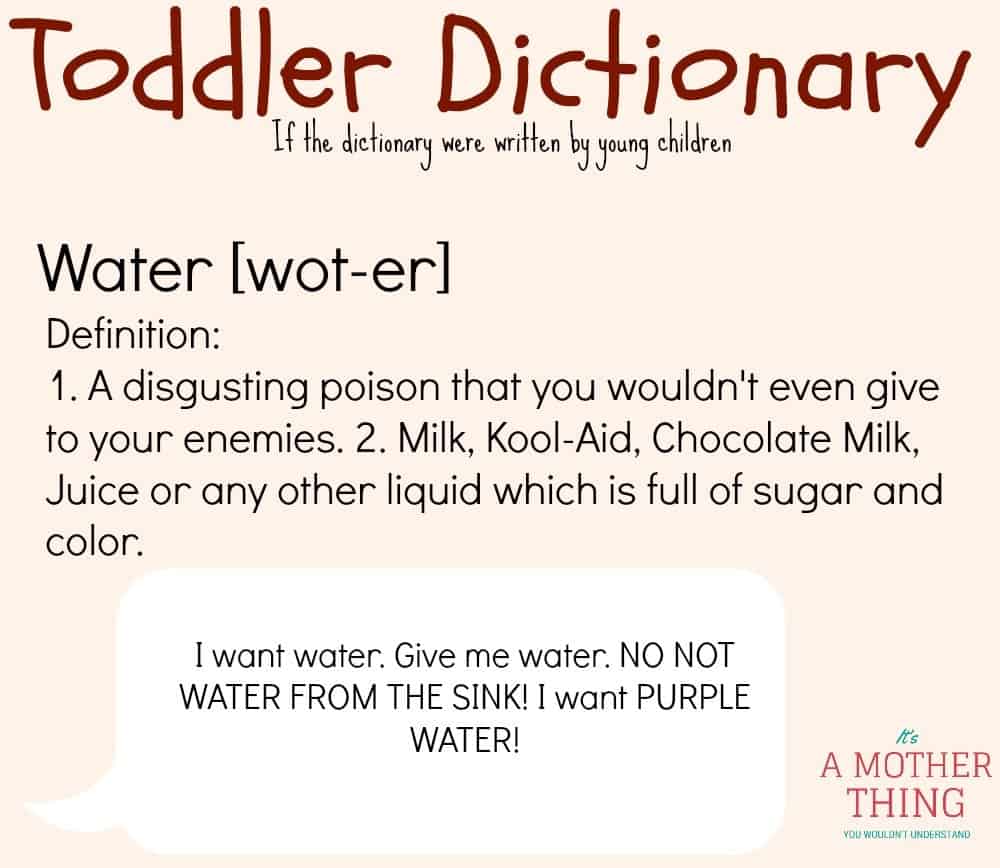 A toy is something you’d think a child could easily understand. It is simply something that serves as a diversion, with no serious practical use. Lord knows we have millions of them just waiting to be stepped on as we make our way through a darkened house in the night. But for kids… I don’t know. Maybe it’s their creativity and imagination, but a toy isn’t so easy to figure out. Just because something doesn’t have bright colors and make obnoxious noises doesn’t mean it can’t be a fun toy, right? 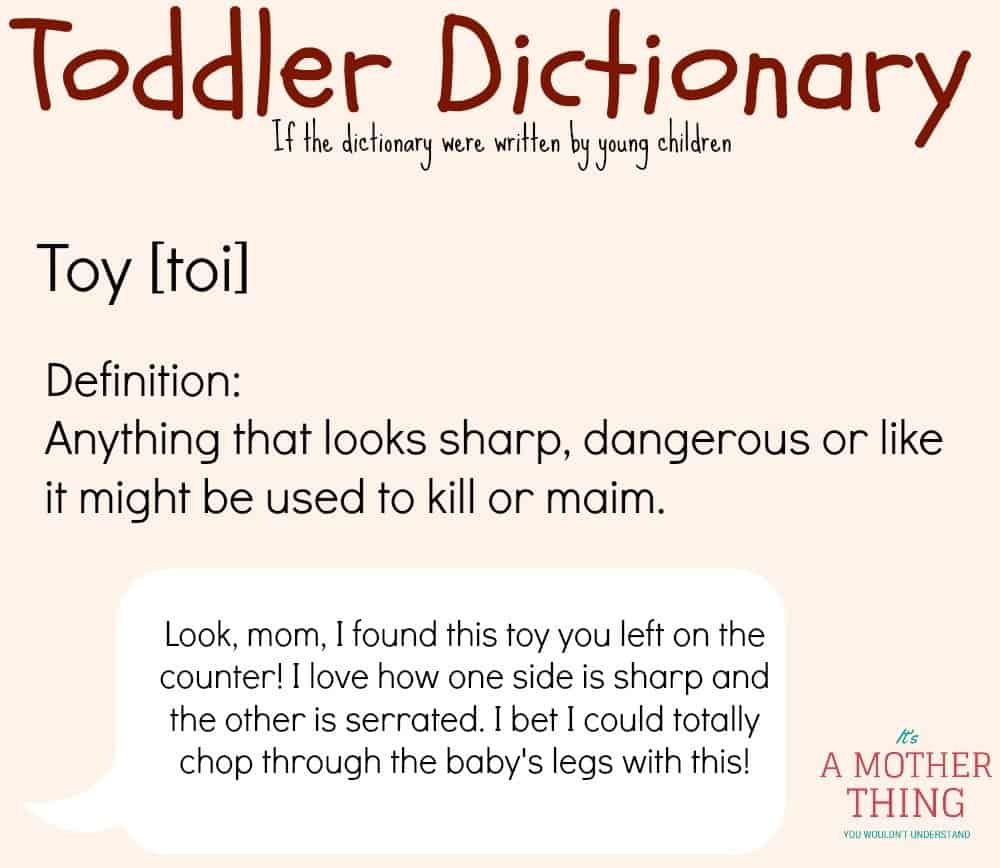 What words do your kids (mis)use that drive you crazy? Are you as confused as I am? Does it ever get better?!

NEW! Now you can listen to this post as a podcast!

MobileGnomes.com – A family travel blog focusing on USA travel in an RV.
2 shares