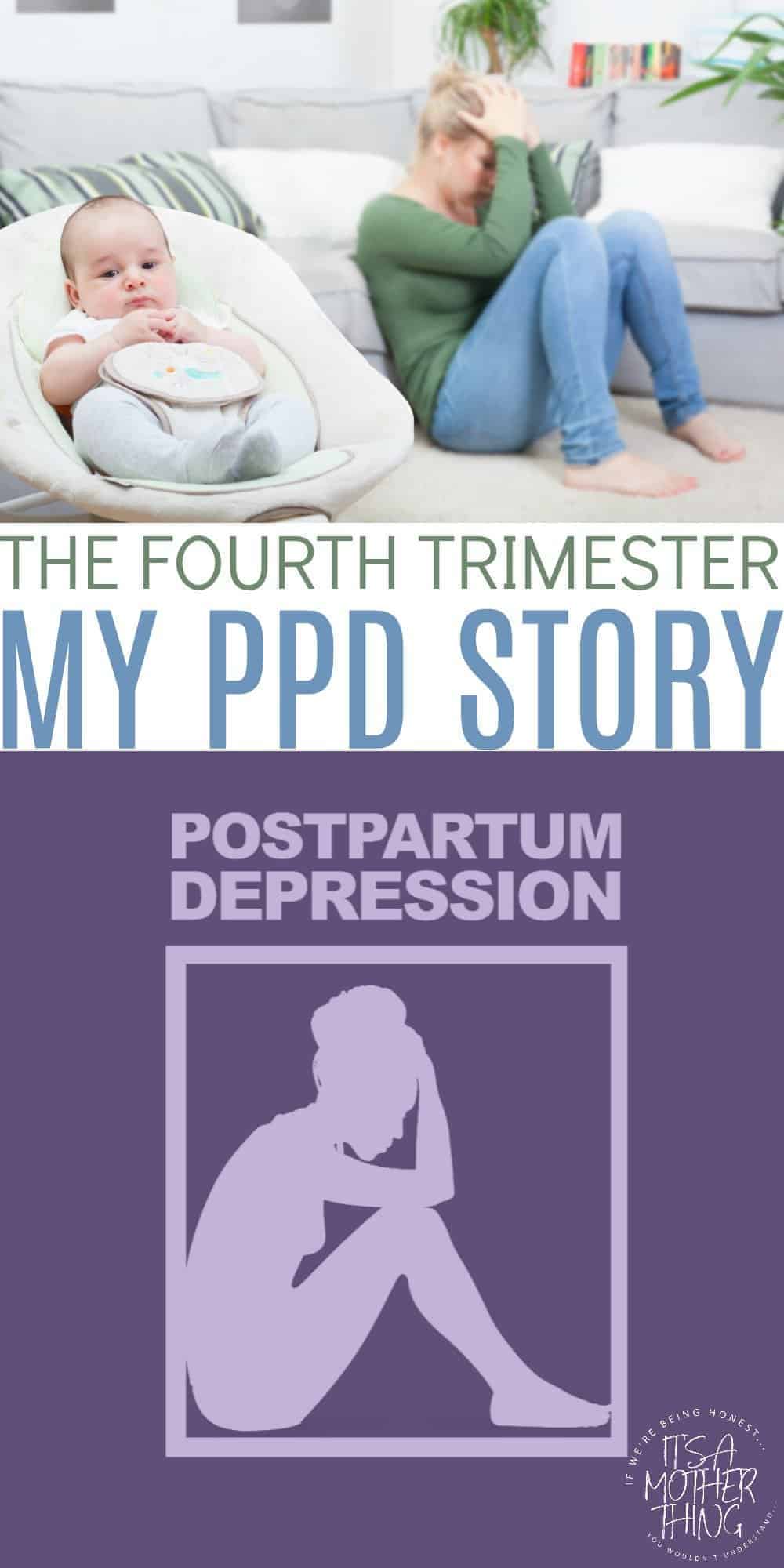 When it comes to Postpartum Depression, I feel like I’ve been through it all. Not only have I dealt with it after each of my children’s births, but I also suffered from traumatic Perinatal Depression, which is depression during pregnancy. Somehow, though, this time around, it took me a while to realize that I was suffering from Postpartum Depression (PPD). In fact, it was so different from my previous experiences that I almost didn’t recognize it at all! This time around, my PPD has manifested itself in a few different ways, which I’ll expand on below.

Firstly, I became intensely obsessive about the state of my home. I began cleaning and rearranging rooms all over the house, getting ridiculously angry if the kids dared to mess it up even a little bit. I would become overly emotional when I saw toys out of place or food spills or anything that made the house look unruly in the slightest. I was bleaching and scrubbing and hand-washing dishes and brutally throwing away anything I considered unnecessary, which included quite a few of my kids’ favorite toys.

Secondly, I had a resurgence of my eating disorder. I had lost a lot of weight during this pregnancy due to gestational diabetes and a weird aversion to most foods. Once my son was born, I lost the pregnancy weight and about fifteen pounds on top of it. It was kind of nice since I’m overweight to begin with. But as the depression took hold, I began binge-eating to try and fill the emotional void, and I put on all the lost weight in the space of a couple of weeks, ending up the same weight as I was the day I gave birth. Yikes! I also became lazy and despondent, keeping myself on the couch all day, watching TV as I dug into chips and cookies and cakes that I wouldn’t normally even look twice at.

One of the weirdest things that I noticed is that I was over-filtering all of my photos. I wasn’t happy with any part of my life, so I was adding random colorful photo effects with apps I found on my phone. I was trying to make every part of my life look bright and shiny and like rainbows were pouring out of our house all the time. It was odd and unreal, and I couldn’t stop.

Finally, I was spending tons of money on unnecessary “stuff.” I was having Amazon deliveries two or three times a day, buying anything and everything I could think of. As soon as something popped in my head, I would hop on their site and buy it, no matter the price or what the reviews said. I was trying to fill that void in myself again, and if food wasn’t working, then something new would surely do it, right? Wrong, of course. I still have several boxes in my dining room that haven’t even been opened because as soon as I hit the Buy it Now button, the rush of spending money disappeared. Nothing I bought made me any happier.

So basically, I’ve spent the last three months getting fatter and poorer while picking fights with my husband, refusing all intimacy and forcing my unrealistic expectations on my kids. Mom of the year, for sure.

So why did it happen? Well, first of all, Postpartum Depression can happen to anyone. Even the most well-adjusted person can get hit with it, and it can be crippling. Especially if you’ve never dealt with such a thing before. For me, with my long history of depression, self harm and suicidal thoughts, it is more likely that I will suffer from PPD. It’s not at all unexpected. Which I guess is why it’s even worse that I didn’t figure it out earlier.

I guess the main impetus was my traumatic birth story. I haven’t been able to write about it yet, even though it’s been over three months. I intend to share it all at some point, but every time I think about it, my brain shuts down. I guess it’s some form of PTSD trying to protect myself from reliving it. It’s pretty stupid since everything turned out fine in the end. I’m still here, and Wilder is doing great. We’re both fine. But it so easily could have gone the other way, and it almost did. Suffice to say that I’m very surprised I didn’t realize sooner that I was going a bit mental.

But… and it’s a pretty big but if you know what I mean… I eventually did recognize what was going on. I realized that I was severely depressed, and I told my husband, and I tried to figure it out. And here’s the big confession – I’m still trying to figure it out. I haven’t seen a doctor because I don’t trust my doctor. After the birth experience and aftercare, I feel let down by medical professionals, and I don’t want to deal with them right now. In fact, I have several physical health issues that have been becoming more of a problem, but I can’t go to the doctor because I’m just not able to bring myself to trust anyone yet. Perhaps soon, but not yet…

I can tell that things have gotten better in the last week or so. I have let go some of my obsession and compulsiveness. I am not freaking out about the house so much. I also decided to go Cold Turkey on buying anything from Amazon for the entire month of March. So far it has worked, though I did have to buy two items that were necessary – one a health item for my son and one book that my husband asked for.  Nothing else has been purchased.

I also started working on self care. I bought myself some new makeup from Sephora and a couple of fun t-shirts from Torrid, and I played around with them. I felt good. I felt like I looked good. Despite the weight gain and not feeling my best in my body, it was nice to just let myself experiment with makeup and hair and fashion for a little bit.

I’ve also realized that there are things missing from my life that used to make me happy. For instance, I have always loved art. I have an art and craft studio in my basement, full of paints, canvases, a Cricut machine and a TON of supplies for any possible art project. Yet, I never use it. In fact, I got the Cricut for Christmas, and it took me two months before I took it out of the box, and that is as far as I’ve gotten. I haven’t had the chance to use it yet.

I’ve let down a ton of people over the last while, including clients. I run my own business as a Virtual Assistant, and I have several clients that I write for. But because of the state of my mind, I can’t bring myself to commit to the posts I need to do. I am constantly late, and I’ve finally realized that I can’t actually do the work any longer until I can get my head and heart working like they should be.

Here’s the good news – I have been able to bond with my sons better. My baby boy gets ALL the mommy time he needs. In fact, I am pretty sure I average holding him for about 22 hours a day, including night time, where he sleeps curled up beside me in bed. My three year old son, Chester, has been taken out of daycare and is home with me all day, which has been a lot of fun. He is crazy and energetic, but I need a little of that. He and I have become much closer than we were, which is a weird thing to say. I mean, why wouldn’t a three year old be close to his mommy? Well, in truth, for the longest time now, we’ve not been getting much quality time together. He’s usually whisked off to daycare when my husband goes to work and he doesn’t get home until daddy picks him up at the end of the day. We would get about 90 minutes between then and bed time, which was time spent eating, bathing and getting ready for bed. I realized I needed to enjoy what is left of the time we have before he starts school, so I insisted we bring him home. He also needs potty trained, which has been a tricky thing, but I’m hoping will become easier now that he gets more time with me. Here’s hoping.

My five and seven year old sons have also been getting more quality time with me. I have changed our schedule to give them dinner directly after school so that we don’t have to spend that time after daddy gets home with cooking and eating. We can just be a family together and enjoy it.

But at the end of the day, even though things are going better now, I know that I’m still battling this depression. My first thoughts each day are still focused on food and watching TV. I’m still trying to rein in the yelling because I find that I’ve become the mom who yells all the time, and I HATE that. My kids know about my depression because I’ve been very frank with them in the past, and they understand how much I love them. But I don’t want to yell anymore. I don’t want to have that be the memory they take with them as they grow.

For now, I am dealing with everything as well as I can. I’m finding it cathartic even writing all of this down. It’s good for me to be able to put names to the feelings I’m having. Like panic. And fear. And anger. And sadness. But there’s also excitement and pride and hilarity and love.

More than anything, there is love.

9 Tips For Better Body Image in Pregnancy and Beyond

[…] turbulence. It is a life-changing experience that alters us physically and mentally. Navigating the postpartum period is often ignored by doctors and books, and new moms flounder as they try to figure it out on their […]