Waking Up in a New America

As women, our lives are going to get infinitely more complex over the next four years. We are standing on the precipice of a new age for womankind, and it could go either way.

On the one side there is that vision of Trump’s America, which will go back to “traditional values,” which basically boils down to women’s rights – the rights we fought for and WON not even 100 years ago – being taken away. It means that science will bow to the will of religion – but only if it’s the “TRUE” religion of Christianity. It means that anyone who looks different from Trump or who sounds as though their accent might be contaminated by some other culture will be scrutinized as a potential enemy. It means that my LGBTQ family and friends will be legally persecuted. Their rights, which were so recently won and already so fragile, will be stolen from them like a rattle from a naughty baby.

On the other side is the vision of Clinton’s America, a vision that I and millions of others bought into. It is the shattering of the glass ceiling, where our collective femininity is not seen as a weakness, but as a strength! Where women of every race, ethnicity, religion or sexual persuasion and identification raise their arms in the air as we are FINALLY accepted as the equal to any man. It is the freedom from religious persecution. It is the acceptance and embracing of every culture, knowing that our nation was FOUNDED as a melting pot of world views. It is the safety, security and legal protections for my male friend and his husband, my sister-in-law and her wife, and the three adopted babies that my transgender colleague is about to call his own.

It amazes me how often over the last year and especially the last few months that I have heard the various buzzwords floating around about our former First Lady and once future President. “Crooked” is one I’ve heard countless times in everyday conversations. “I just don’t like her,” has been bandied about by nearly every woman I’ve met who supports Trump. They jump on board the so-called “email scandal” because they lack any other reasons for disliking Mrs Clinton. They repeat everything they hear, refusing to listen to any facts that don’t support their idea of her. She’s a “nasty” woman, don’t you know? “She stole from the White House when she left it!”  “Benghazi!” they cry out, many of them not even knowing where it is on a map, let alone what actually happened.

Don’t get me wrong – there is plenty to be critical about. Mrs Clinton has flip-flopped on many important issues.  As much as I appreciate her recent promises about LGBTQ protections, this has not always been her platform. She has gone on record in the past as being against gay marriage. However, I firmly believe that it is in any human’s capacity to change their outlook. Someone recently expressed to me the belief that she is NOT for gay rights at all, but is simply paying lip service in order to win. My answer? I don’t care. You can believe whatever you want in private as long as your actions do not harm others. She is saying and doing the right things, and that is more important than any privately held belief or ideology.

As for Benghazi, Mrs Clinton took responsibility for the security lapses. She admitted her mistakes and expressed her regret. Nevermind that President Bush was repeatedly warned of impending terrorist attacks by Al Quaeda on US soil and repeatedly refused to act until it was too late. It was only years after 9/11 that we started being able to piece together just how much he dropped the ball in 2001. That didn’t stop him from being re-elected for a second term.

The truth is that Mrs Clinton’s one major flaw is – and this is a big one – being a woman. Republicans have had a difficult enough time over the last eight years dealing with a black President. But serving up a female is inconceivable to them. And as women, we are incredibly judgmental and skeptical of other women. We generally only like women if we feel superior to them or if they are so superior to us that we have no choice but to admire them. Likability is determined in women by how attractive they are, how young and energetic they are, and how much they smile. Hillary, with her advancing age, severe styling and quintessential Resting Bitch Face was never going to be admirable enough for most women. And the fact that she is smart, capable and takes no shit means that we can’t feel superior to her, either.

And so we come down to the election. I think the closeness of the results (Clinton won the popular vote by 222,200 – that’s LESS than the population of Reno, Nevada) shows just what a divided nation we really are. What is it that we see in Donald Trump that we couldn’t see in Hillary Clinton? She is smart, capable and infinitely qualified to work with the many individuals who keep this country on track. He is an egomaniacal bigot who seems to believe that there are certain people in this world who are not human enough to deserve basic human rights. He lies constantly and about the simplest things. If he’s not lying, he’s deflecting questions so that he doesn’t have to lie. He brags about not paying taxes in one breath and then condemns those who don’t pay taxes with the next. He encourages violence and vitriol. He thinks only of being the best, whatever strange ideas he has about what makes someone the best.

I hear people say they are tired of politicians regulating everything. They feel disrespected by our country’s leaders. They are ready for someone to take over and make real change. And I get it. I really do. If you feel that you or your family is suffering in some way due to policies that someone you’ve never met nor voted for put into place, I understand wanting things to be different. And lucky for them, this new candidate has won. Hillary is out, Donald Trump – reality TV star, serial womanizer, adulterer and accused rapist is in. Nevermind that he has never in his life wanted to help out the “common man.” Nevermind that he spent his campaign preparing for a loss and figuring out how to make himself a ton of money out of it. Nevermind that he has no respect for the first amendment, only respecting our press if they are offering him publicity or advancing his interests.

This is your man of the people. Our next President. And I have no doubt he is the President that we deserve. 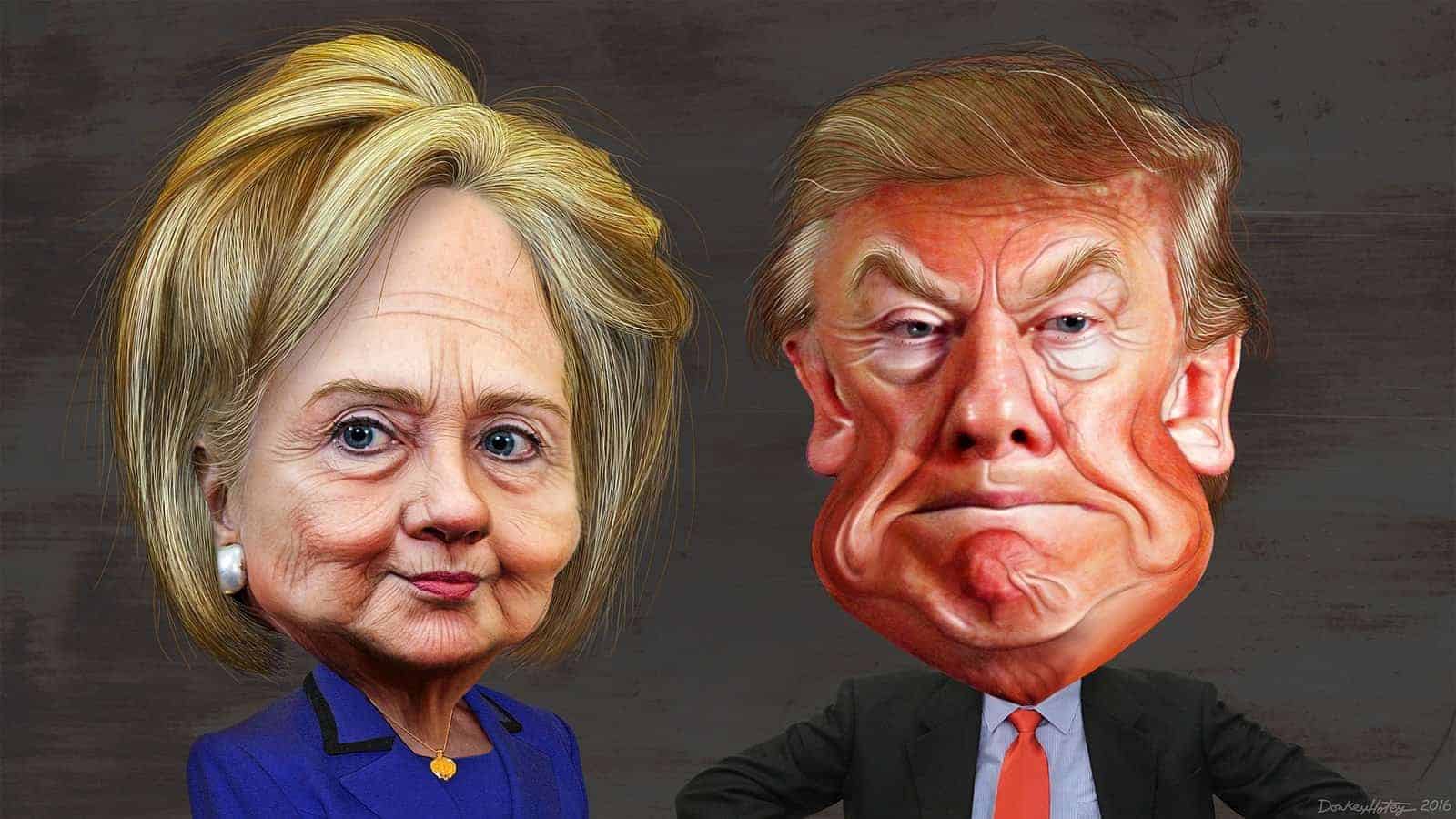 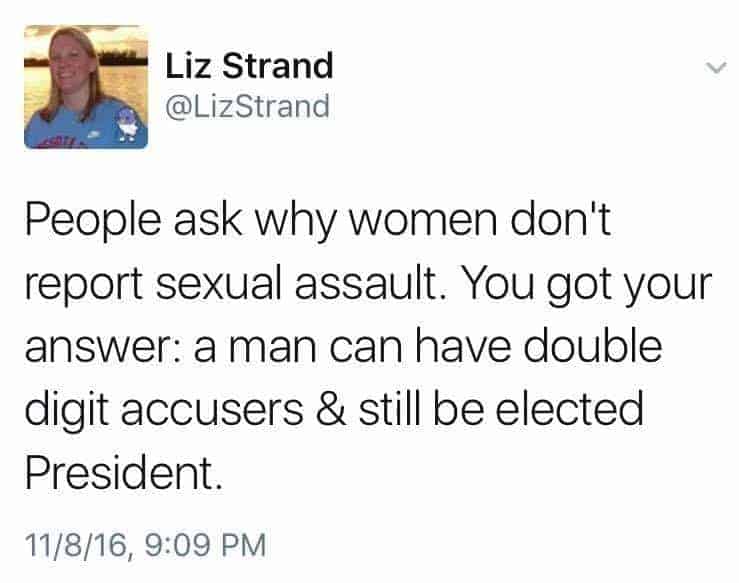 Well said, Katie. It is a sad time in America when a person like Donald Trump gets elected to the most highly respected position in our country when there is not much to respect about him, in my opinion.

I find it interesting there are no responses to the thoughts of the November 9, 2016 blog.