For some reason, I’ve been REALLY craving potato soup lately. Obviously I put it down to the cold weather and piles of snow which surround us at the moment, but more than that, I think I just associate potato soup with my grandmother, and my grandmother I associate with Christmas, and tis the season…

So anyway, a few days ago, I got the idea to go ahead and make some homemade potato soup. But having never made it before in my life, and not knowing what the hell I was doing, did I decide to make a test batch to try it out?

I made enough to fill a bucket and decided to freeze it up so I could eat it for the rest of the winter whenever I want!

And you know what? It didn’t turn out half bad.

I think I’m blessed to come from a family of excellent cooks. My mom can pretty much whip up anything from nothing, and since she’s a really picky eater, her dishes tend to be very simplistic, yet AMAZINGLY yummy. My grandma USED to be a good cook, too, but I think her taste buds have deteriorated over the years, as a lot of her stuff these days is kind of… well… flavorless.

Anyhow, both of these wonderful ladies have been kind enough over the years to impart me with little bits of knowledge which I have been able to utilize for my own nefarious purposes when creating recipes from scratch.

For my potato soup, I came armed with absolutely NO ideas about execution, only a general understanding of how it should taste by the end.

Yesterday, as Mark finished his work day in the comfort of our dining room (he worked from home due to weather), I started to prepare for my culinary masterpiece. I HAD warned Mark that I was making potato soup for dinner, as I wasn’t exactly sure if he liked it or not and what his response would be. But as usual, he was game.

So I rolled up my sleeves, battered some pots and pans around and started to cook.

The obvious first constituent of any good potato soup (at least in my mind) is… potatoes. I figure they are integral to the recipe, so I chopped about 13 or 14 of the buggers up into a big pot and covered them in water. I set them on to boil.

I also wanted the soup to be hearty and full of flavour AND goodness, so I decided to fill it full of whatever vegetables I had on hand. And while I set about chopping them up, I got me a pack of Oscar Meyer bacon and fried it up nice and crispy.

Once the veggies were chopped up nice and fine and the bacon was removed from the pan, I added about half a cup of butter to the bacon grease and then threw the vegetables in to fry until they were tender, but not brown.

Once they were of the right consistency, I had a small dilemma. I had planned on using milk to get the creamy consistency I dreamed of, but I felt that it was going to be too thin. So at the last minute, I changed the plan and got a pint of cream, which I mixed up with a couple tablespoons of corn flour. I then added the mixture into the vegetables and let it simmer for a few minutes, stirring constantly so it wouldn’t become lumpy. Once it seemed right, I then crumbled up all the crispy bacon and added it into the mixture.

Then, I simply added the entire mixture into the big pot of potatoes and stirred it on up. By this point, the potatoes were super tender and the water had boiled down a bit. So the addition of the cream sauce gave it a creamy SOUPY consistency, which is what I was after.

In the end, after tasting it, I added three other ingredients to give it that special something. Firstly, I added about a cup of shredded cheddar cheese, which made it even creamier and gave it an edge. Then I added two cooking essentials: salt and pepper to season it.

I was REALLY pleased with how it all turned out, and I wound up having a big bowl for dinner (as did Mark) and putting the rest into tupperware for eventual freezing.

The only thing I think I could improve on (if I say so myself!) is that next time I will chop the potatoes much smaller.

What’s your favorite winter soup recipe? Or just a  favorite recipe in general!?

You CAN leave the bacon and cheese out at the end and just use it to garnish the soup, but I personally prefer to have it all IN the soup. It just tastes amazing.

Did you make this recipe? 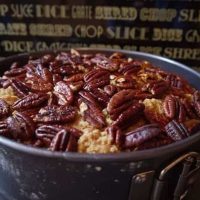 Next
Coffee Cake Made With Sweet Potatoes
Click here to cancel reply.

I am regular visitor, how are you everybody? This piece of writing posted at this web site is really fastidious.|

You produced some very good points there. I did a search around the topic and discovered most people will agree with your weblog.

How can I get your images to show on my Blackberry?

Looks delicious..especially since you went at it with no plan at all. My husband is that type who can whip anything up out of nothing, but I am a little less creative in the kitchen and need very simple receipes to follow. haha Now I'm craving potatoe soup!! Yum!

Aw thanks. I'm actually having another big bowl of it as I write this! Lol.

Merry Christmas to you, too! Hope it's a good one!

MobileGnomes.com – A family travel blog focusing on USA travel in an RV.
Skip to Recipe
197 shares